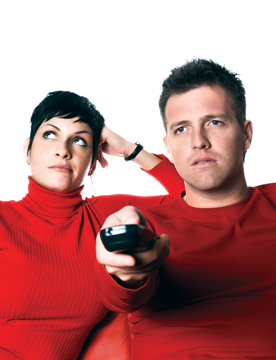 A local writer explores his deep desire to watch televised sports during December.

To paraphrase almost any athlete or any coach anywhere, I mean no disrespect to my wife, parents, sister, in-laws and assorted other whosis (cousins) and whatnots (nieces’ boyfriends) in the broad realm of relatives. They all are salt of the earth. (Unrelated fact: I try to limit my salt intake whenever possible.) However, holiday patter&emdash;like yet another holiday platter&emdash;has its drawbacks. No matter how sincere my interest in catching up with every relative’s comings and goings, accomplishments, goals and dreams, I need timeouts, halftimes and, finally, a game-ending buzzer to all my December conversations.

Which brings me to a comfortable chair before the television. Feel free to join me but, please, let’s restrict our commentary to the game at hand. And brother (or whatever you are), we have a lot of games to choose from.

Take college basketball. No, seriously, please take it somewhere else because I have zero interest in that and little in the NBA, beyond listening to psychologically entertaining office chatter about how the Kings did last night. (I hear either We won! We shot this, we blocked that, or They lost. They missed this, they botched that.) Basketball is all over the tube in December. Hockey’s probably on TV, too, although not as much as if you were reading this in Saskatchewan instead of Sacramento. Speaking of fights, you also can find those with your channel-changer, along with golf tournaments in warm and inviting locales. (Imagine pink-faced, balding broadcasters in loud, flowery shirts who rhapsodize pre-boozily about something called island hospitality.)

Football better holds my attention. College conference championships and bowl games are sprinkled liberally (think volcanic ash on Pompeii) throughout the month. NFL teams are in their final push to the playoffs, with tilts (forgive me; one of my part-time jobs is writing headlines) on Saturdays, Sundays and Monday nights. One of my all-time favorite December football games was the double-overtime playoff on Christmas Day 1971, when my family was visiting Grandma and Grandpa in rural Illinois: Miami 27, Kansas City 24. Long live Garo Yepremian. I watched alone&emdash;everyone else missed out by spreading holiday cheer or some such.

So, yes, I have many years’ experience watching sports on television. You or some seven dozen people you know can say the same thing. But aside from our using it as an excuse to avoid family chitchat, why do we care about sports? How much slouch-on-the-couch time is too much? What good will it do us? Or, more importantly, what exactly is the harm? And are there bigger issues at play here?

For answers, I turn my attention from one life-draining contraption to another, from our old-school 19-inch color television (at least it has a flat screen) to our PC monitor (as big as a beach ball and as heavy as a whale). To begin my investigation, I type sports fanaticism into a search engine. (Cultural aside: When I type sports fans arrested, I get a lot of references to soccer matches in Europe.) A picture starts to form.

Viewers identify with their team, their favorite players, those warriors who carry the good name of their city, college, conference, nation, ethnic heritage or other characteristic into battle, the Museum of Broadcast Communications, on museum.tv, intones soothingly to a longtime fan’s soul. Sports offer real heroes and villains, as opposed to the fictional characters of televised drama and comedy.

Sports are entertainment and can fill voids in people’s lives, a Texas A&M news release from 2002 reports, a little less reassuringly. The article’s source, an on-campus sports psychologist, links watching sports with self-esteem. Affiliating oneself with a particular team and identifying with that team is a reflection of [the] desire to be associated with winners.

Academic talk about voids and losers is wearisome. It’s time to get less cerebral.

Askmen.com offers eight reasons for being a sports fan, including It’s a great way to suck up to your boss and, I kid you not, It’s a great way to meet women. The site proposes this pickup line at a hockey game: I love seeing passionate fans like you. Maybe we should discuss our mutual love of the team. If she accepts your offer, you just met the perfect woman.

Getgirls.com, the world’s leading source for attracting women, has advice for sports-addicted bachelors who are on the prowl. When you first start dating, writes supposed authority Don Diebel, she might . . . put up with your wanting to spend all your time watching sports. But eventually, and sooner than you think, she’s going to get pissed. The writer solidifies his sexist credentials with this conclusion: What would be ideal is to be dating a woman who is understanding and accepts the fact that some men are obsessed with sports. After all, it’s no different [from] women being obsessed with watching soap operas.

Odds are, enormous quantities of food are part of your watching-sports-on-TV routine. Weight Watchers is concerned about your health. One of its meeting leaders, on medicalnews.com, knows how you can help solidify your big win and avoid packing on the extra pounds. Try substituting pretzels for chips, making dips with low-fat plain yogurt instead of sour cream, and getting up to move or even take a quick walk during halftime. Sounds like a lot of work, doesn’t it?

Seduction through sports fanaticism and snarfing (no matter how nutritious) are not everybody’s idea of a good time. On scionofzion.com, a self-described Internet ministry, Ken Matto warns, It seems we have traded our Bibles for scorecards. His 16 traits of an out-of-control sports fan include You take the Lord’s name in vain if you become angry at a play and You miss the evening service for a sporting event.

Satan has arranged the world of sports to keep minds in bondage to it, Matto writes. If some of the listed characteristics are present in you, then Satan has built a stronghold in your life.

Whoa. I feel a tad guilty about wasting so much of my life watching sports on television, but not that guilty.

I will concede, however, that staring at a TV for hours can be like having a fourth beer: You are numb to the point that you really want it, but you probably have passed the point of diminishing returns. Turnofftv.org, which points out that children in the United States will spend more time in front of the television (1,023 hours) than in school this year (900 hours), wants you to cut the cord. Turning off the television gives us a chance to think, read, create and do. To connect with our families and engage in our communities.

David L. Phillips, a curmudgeon who writes for suite101.com (an online magazine from British Columbia), says he does not own a TV and never watches one. I pick up a copy of People magazine and hardly recognize a soul in it. Then he takes a stab at poignancy.

I remember being in a cafe in a small Ohio town several years ago for breakfast and listening furtively to the conversation all around me, he writes. At every table people were talking about the [O.J.] Simpson trial as if it were a historical event on par with the Declaration of Independence. [Here’s the poignant bit:] I was sad.

Although I know what it is like to give up things (meat, dairy, idle weekends, hope for the Chicago Cubs), I doubt I ever will summon the intestinal fortitude to ignore TV. After all, I can stomach only so much family time.

Happy holidays, hand me the remote, and let’s play ball!