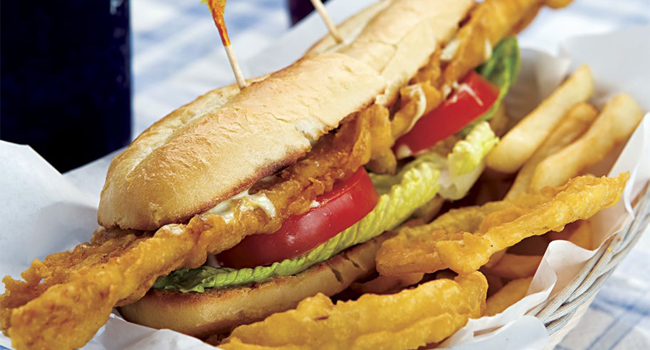 In my fast-food years, when McDonald’s was a frequent stop, I was always the token soul who ordered a Filet-O-Fish instead of a Big Mac. That’s how much I love fried fish sandwiches. It was never hard to find good ones when I lived on the East Coast, where small seaside shacks serving lobster rolls, fried clams and the like are commonplace. But in Sacramento, even places that serve fish and chips don’t always serve fish sandwiches, suggesting this is not exactly a fish sandwich town. Here are five exceptions to the rule, all of them under $8, listed in order of personal preference.

TUGBOAT FISH & CHIPS (7601 Fair Oaks Blvd., Carmichael)
Admittedly, I may be partial to this place because it reminds me of the seafood shacks I loved back East. In addition to the blue-andwhite nautical theme, this tidy little shop also boasts a nice patio, so it’s perfect for dining al fresco. (The only thing missing is the seashore.) But the food is great, too. My fish, served on a roll, was crispy and clean, reminiscent of tempura, and accompanied by thick tomato slices, crunchy romaine, onion and plenty of creamy tartar sauce. It came served in a basket on a decent-size pile of basic fries and a few onion rings. Unusually friendly service, too.
PRICE: $6.49 (including fries)

CAPE COD FISH & CHIPS (5113 Folsom Blvd.)
When The Boyfriend—an East Coast native himself—bit into the sandwich from this casual East Sacramento spot, all I heard was an “mmm.” He said he liked everything about it—the sauce, the crunch, the flavor. I had to agree that the sandwich was on par with Tugboat’s and followed the same formula: crisp, nongreasy fish served on a roll with lettuce, onion, tomatoes and tartar. The fish was even fatter here, actually, and the pile of fries was bigger, but I still give Tugboat a slight edge—partly because of the patio (and just because).
PRICE: $6.59 (including fries)

OCEAN FISH AND CHIPS (2558 Cottage Way)
Split decision here: I thought these sandwiches were five-star, while The Boyfriend thought the fish had the faint taste and smell of oil, which for him ruined the experience. Whatever. I liked the nice, plump piece of fish and the generous slathering of tartar sauce. I also enjoyed the pickle that was added to the usual suspects—lettuce, tomato, onion—providing a little zing. Lots of fries, too.
PRICE: $6.49 (including fries or coleslaw)
DOLLAR-WISE NOTE: To save a little coin, order the fish burger instead of sandwich. The only difference is the bread: The burger comes on a sesame bun, the sandwich on a roll. Big whoop.

FINS MARKET & GRILL (2610 Fair Oaks Blvd.)
Here we veer from the classic fried fish sandwich formula into slightly different, more sophisticated terrain. At Fins, you’ll find nearly 20 seafood sandwich varieties, from salmon to scallops, crab salad and catfish. But only four were under my price point of $8, which is what steered me toward the calamari. I was not disappointed. Lightly breaded in panko crumbs and fried, it was tender and delightfully different, served simply on toasted sourdough bread with tartar sauce (no produce). My only complaint: not enough tartar sauce. But I adored the coleslaw, which had a clean vinaigrette flavor (instead of mayo).
PRICE: $7.95 (with slaw, fries or vegetables)

BURGERS AND BREW (1409 R St.)
In a sea of burgers, Burgers and Brew also serves this item from the, ahem, sea: a tilapia sandwich. The thin, firm fish is coated in panko crumbs and fried, then served on a ciabatta roll, with romaine, tomatoes, red onion and housemade tartar sauce (on the side). Tilapia is a mild fish, so to my taste buds it was slightly bland but still satisfying. The real star was the surprisingly large side of mixed greens, served with a delicious balsamic dressing.
PRICE: $7.95 (including fries or salad)