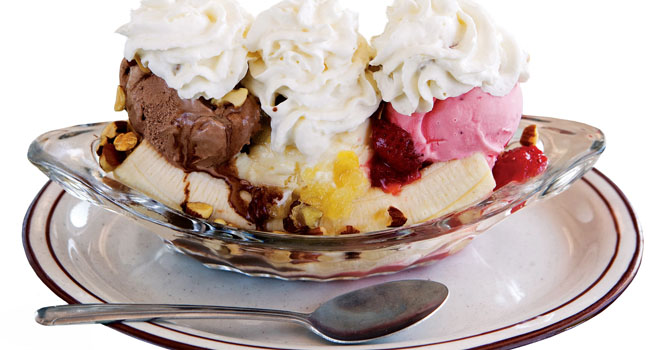 As ice cream confections go, the banana split is the granddaddy of them all. The Big Kahuna. The Grand Poobah. The (dare we say it?) cherry on top. With three scoops of ice cream, three sauces, whipped cream, nuts, cherry and the sliced banana that gives it its name, it also is—not surprisingly—the most expensive item on most ice creamery menus. Just how expensive? And whose is the best? To find out, Dollar-Wise sampled splits at four of our region’s most popular locally owned ice cream parlors. In the interest of fairness, I stuck to the traditional split: chocolate, vanilla and strawberry ice creams, topped with chocolate, pineapple and strawberry sauces. The finding: The local price point for banana splits is pretty consistent. It’s also a good deal, dollar for dollar, as sundaes are, oddly enough, often pennies less. At Gunther’s, a specialty sundae is $5.90 and a split $6.65; at Leatherby’s, the price difference between a hot fudge sundae and a split is just 30 cents. Here are the fab four.

VIC’S ICE CREAM (above)
3199 Riverside Blvd.
PRICE: $6.75
Seeing a thick, sensuous swath of whipped cream spread across the three scoops, I immediately gave a thumbs-up to my banana split at Vic’s, another Sacramento landmark (since 1949). It also was loaded with crunchy, fresh, thick-cut almonds, and the ice cream was rich and tasty. While the cherry was inexplicably MIA, this did not stop me from loving every spoonful.
vicsicecream.com

GUNTHER’S ICE CREAM SHOP
2801 Franklin Blvd.
PRICE: $6.65
Don’t be dismayed if you encounter a long line here (as I did): It moves fast, and it’s worth the wait. This old institution (around since 1940) still knows what it’s doing, as my banana split was sinfully good, with fresh-tasting ice cream, an especially delicious pineapple sauce and a generous amount of whipped cream. The Boyfriend and I inhaled it in seconds.
gunthersicecream.com

BURR’S FOUNTAIN
4920 Folsom Blvd.
PRICE: $7.45
Presentationwise, Burr’s wins the prize, with three big, beautiful dollops of whipped cream and a cherry atop each one. (The Boyfriend deemed it “a work of art,” bringing a smile to the young woman who cheerfully served us.) It also measured up in terms of portions and flavor, powered by Vic’s yummy ice cream and loaded with chunky chopped almonds. Only minor complaint: a little skimpy on the sauces.

LEATHERBY’S FAMILY CREAMERY
2333 Arden Way
PRICE: $9.29
At nearly $10, Leatherby’s was far and away the priciest split I tested, and—at least based on my singular experience—not worth the additional cost. While the ice cream was fresh and creamy and the sauces tasty, the whipped cream was scant, and there was only an itty-bitty sprinkling of nuts. For me, these are the details that count, especially when you’re paying almost $3 more than at the ice cream shop on the next block. But Leatherby’s remains a local favorite for many, so you should try it for yourself.
leatherbys.net