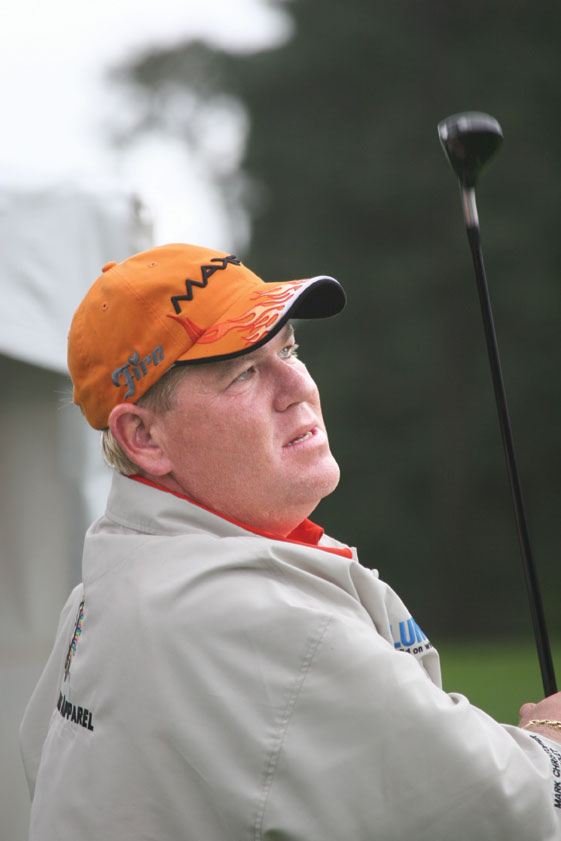 You never quite know what trouble PGA Tour pro John Daly might get into next, but you do know this: The guy can hit the ball farther than the eye can see. He is who he is.

John Daly was 4 years old and living in Carmichael the first time he swung a cut-down 7-iron. He hit the ball about 30 yards on a beeline and broke the family’s living room window. Thirty-eight years later, Daly is looking for another break that will return him to the pinnacle of his game and the elite status he previously enjoyed on the PGA Tour.

The 1990 PGA Tour Rookie of the Year is still a superstar to his fervent fans, without whom he has acknowledged he would be nothing. Part of his charm is that he appears unfazed by this adoration and goes about his business as if he is able to blend into the background as just another likeable lug. Were it not for a certain competitor famous for wearing red on Sundays, it could be argued that Daly might enjoy the distinction as the game’s most popular player.

He drinks too much. He smokes too much. He parties too much. He has lost unthinkable sums of money gambling, lost his treasured Tour card and recently lost his high-profile golf coach, Butch Harmon. But just watch him hammer a golf ball to places your eye can’t always follow, or catch a glimpse of his soft hands around the green, and you begin to understand the enormity of his talent and wonder why his life and his golf game are at odds.

At the recent grand opening of his new signature course, Sevillano Links at Rolling Hills Casino in Corning, I had an opportunity to spend some time with the man alternately known as the King of Grip It and Rip It, Big ‘Un, Long Ball Rebel and The Lion. But on this night, he extended his hand and was just John.

He already had spent about 30 minutes being introduced to small groups in a room filled with dignitaries and members of the media. I lost count of the number of times he was turned around for one more photo, but throughout Daly was open, courteous
and friendly.

I was born pretty close to here, he said about Sevillano Links, so it’s neat to be able to put my name on such a beautiful place. My name will be on this course forever, even when I’m gone.

He likened the Northern California course to courses in Ireland, but without the perplexing pot bunkers in the middle of the fairway, which he can’t stand. He continued, We opened a course [in Ireland] last year called Blarney, with the dry grass along the sides and beautiful fairways. Sevillano Links reminds me a lot of Ireland.

Although Daly answered any and all questions without hesitation, he seemed most comfortable when the conversation turned to subjects like food, football or family. He appeared genuinely interested in trading stories of children and was proud to note that his 4-year-old son, Little John, likes to chip and putt all day and does so with a full-sized set of clubs, just like Big John did with his first set of used Jack Nicklaus MacGregors at the age of 6.

Daly told his father he didn’t want his clubs cut down. That’s why, he says, his swing is so long: When he was a child, the club almost touched the ground in his backswing. A lot of people have tried to weaken my grip and shorten my swing, he said, but I’ve done it for so long. I figure if it’s not broke, don’t fix it.

A new driver usually lasts him a month to a month and a half. That’s just how it is for guys who hit it long, he explained. After a while, I change the shaft or just kinda need a new one. The driver in his bag was a TaylorMade SuperQuad with six degrees of loft. He had used it for 10 weeks, the longest he had ever kept a driver, and he hoped that one never goes out.

About amateurs trying to hit the ball farther, he said, You’ve just got to realize what your body can do. How far you’re hitting it now is basically what it’s going to be. There’s really no way to teach length; making your clubhead speed higher is really hard to do. Daly said that if he tries to push his clubhead speed to 140, the ball can go anywhere. You just have to accept how far you can hit it and go on. If people would swing like they’re hitting a wedge, the man known as Long John said, they would be amazed at how much better they would play.

Daly, who won two major championships before the age of 30, along with the likes of Bobby Jones, Jack Nicklaus, Tom Watson, Johnny Miller and Tiger Woods, likes to play fast. I’ve always been a quick player, he said. Watching Lee Trevino and Fuzzy Zoeller growing up, I loved how they played. It was Nicklaus who inspired him to play, however. I started playing because of Nicklaus, even though he was a slow player. I just love Nicklaus’ game . . . but Fuzzy’s speed!

His best friends on the Tour are Pat Perez, Tim Lumpy Herron and Rich Beem. We play for a little bit now and then, he said. I miss Fuzzy because every time we played, my hotel room and food were paid for and I’d finish 20th in the tournament. It was great!

Daly has been known to reach deep into his own pocket as well and pull out money for people in need. He is recognized for his charitable support for organizations including Make-A-Wish Foundation and Boys & Girls Clubs of America.

He also is something of a songwriter and performer, as evidenced by his largely autobiographical album that benefited charity. The My Life CD features guest performances by Willie Nelson and Darius Rucker among others.

I liked Daly a lot. I enjoyed meeting him and sharing stories. After a while, his easy manner gives you the misguided notion that you’ve established a close relationship&emdash;the kind of relationship that begs you to plead with him to make better life decisions. He is known to say, The only rules I follow are the Rules
of Golf.

It is the title and lyrics of his song You Don’t Know Me that may offer a peek into Daly’s comeback to criticisms about the choices he makes. In a case of art imitating life, he sings, You don’t have the right to say that I was wrong. You don’t know what’s in my heart.