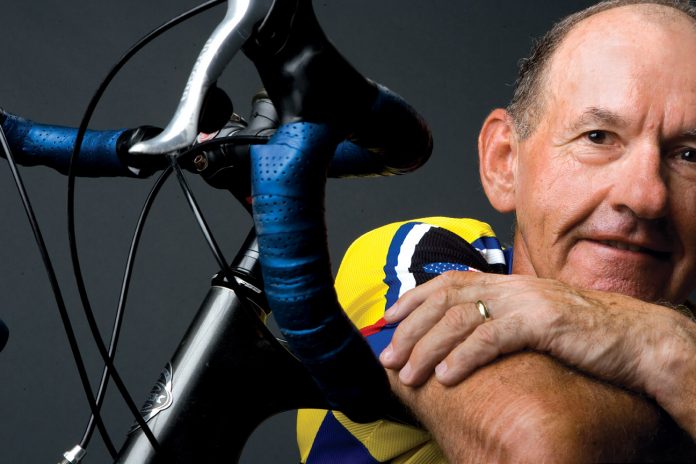 For Sacramentans of a certain age, cycling is the new fountain of youth.

Ken Bell spends a lot of time spinning his wheels.

Bell, 59, is the mileage king of the Sacramento Wheelmen, a cycling club of 700 members with a zealous subset of long-distance riders. Bell logged a club-high 15,153 miles in 2006, and that figure doesn’t take into account the miles he rides during the rest of his waking hours.

I haven’t bought a gallon of gas in 12 years, says Bell. One year, I looked at my car and realized I hadn’t started it in three years. Why keep it?

For those who drive to the corner mailbox, a better question might be: What drives people such as Bell to expend such an inordinate amount of time and sweat hunched over handlebars?

You do it because you can, says Dick Nussbaum, 68, a retired pilot who grinds out 14,000 miles every year. You need it.

Bell and Nussbaum aren’t isolated fanatics. According to the National Sporting Goods Association, older people&emdash;retirees and near retirees&emdash;increasingly are turning to cycling as a way to stay in shape. Earlier this year, Time magazine proclaimed that, for people older than 50, cycling is the new golf.

You start out riding 20 or 30 miles, and it eventually gets kind of boring, Bell says. Then you do 40 or 50 miles and that gets boring. The circle just keeps getting bigger.

Sacramento native Michael Sayers is a professional cyclist who has made a nice living from the sport. Sayers understands cycling’s more insidious appeals: the desire to stretch your limits, the infatuation with high-tech equipment, the fact that you can do it alone or in a group.

I don’t know what it is about cycling that people love, but it’s such an addiction when you get hooked, Sayers says. It’s a drug worse than crack.

Our region certainly enables the addiction. Davis, the first city in the country to paint bike lanes on its streets, is one of the nation’s most bike-friendly communities. Sacramento has the 32-mile American River Bike Trail. The foothills offer a variety of challenging rides. And the weather is conducive to year-round riding.

It’s a great place to live if you’re a cyclist, says Nussbaum, a Land Park resident.

Nussbaum was a 195-pound runner with sore joints. When he retired at age 62, he started cycling to relieve stress on his knees and feet. He leads a number of Wheelmen rides, but when he couldn’t drum up any takers on a recent 600-miler through the state of Washington, he went by himself.

I enjoy riding alone, Nussbaum says. It’s like reading a book. It doesn’t bore me in the least.

While some cyclists take vitamins and watch their diets closely, others do just the opposite.

You can eat and drink all you want and not gain weight, Nussbaum says. In the summer, I actually have to work to keep my weight up. When I finish a breakfast ride, I go home and drink beer.

The Wheelmen offer up to 40 organized rides every month. The slower-paced jaunts are known as breakfast rides, where as many as 50 or 60 cyclists gather for an out-and-back morning trip to a high-carbohydrate eatery.

Tom Goodwin, 81, leads a number of breakfast rides. The ride leader is responsible for calling ahead to make sure the bowlegged group is welcome where they plan to eat.

We’ve been thrown out of the IHOP on Sunrise, Goodwin says. I guess they feel like we’re too much of a hassle. Everyone asks for separate checks.

They can really smell up a place, he says.

The serious cyclist’s wardrobe includes tight-fitting spandex shorts, lightweight jerseys that dry and wick quickly, specialized shoes and high-performance socks. Some jerseys advertise a local club or bike shop, others a particular ride or race. Some amateurs wear replicas of the jerseys worn by Lance Armstrong and other world-class racers.

Clothing is a major enterprise, Nussbaum says. Jerseys sell for $35 to $60. Fortunately, they last a long time. I must have 15 or 20 of them.

Yet even the brightest jerseys pale in comparison to the cost of a high-performance bicycle. A high-tech carbon frame runs about $1,500. And that doesn’t include components such as wheels, tires, pedals, cranks and handlebars.

For the guys, the tech part is huge, Sayers says. It’s like cars and car parts but on a smaller scale.

Despite all his travels, Bell says he’s never actually worn a bike out. He spends about $2,000 on a frame and another $2,000 on components.

New stuff comes out and you think, â€˜Gee, I wish I had one of those,’ Bell says. Oftentimes, you’re just buying the same bike in a different color. A guy can buy a faster car than you have and beat you, but it’s really hard to buy a faster bike. A $2,000 bike with a good â€˜motor’ will beat a $10,000 bike with a weaker â€˜motor.’

Ralph LeMeur, 66, and his wife, Kris, 60, ride a titanium tandem that cost $10,000. Last year, the Rancho Murieta residents rode 8,500 miles together, including a 55-day transcontinental ride from San Diego to Virginia.

Riding with Ralph has really helped my fitness, says Kris. I’ve dropped about 20 or 30 pounds and feel really good. We work really well together. We don’t fight on the bike very often.

Crashes are an accepted part of the game. Nussbaum suffered a broken leg and shattered hip when a dog darted in front of his bike. Bell’s injuries include two broken collarbones and a broken leg. But that’s in 350,000 miles, Bell says.

Rather than make hard-core cyclists think twice about navigating narrow two-lane roads, injuries seem to have the opposite effect. Sandy Yarrow, a recently retired nurse who rides about 600 miles every month during the summer, remembers an excruciating layoff after breaking her leg on the ski slopes.

I was miserable and feeling sorry for myself, says the 63-year-old Granite Bay resident. I had to read The Grapes of Wrath to put it in perspective. When I could finally cycle again, it was pure tonic.

Larry Robinson is something of an minence grise in the local cycling community, known for encouraging cyclists of all ages and levels. The longtime owner of the now closed Rest Stop cycling shop on Folsom Boulevard in East Sacramento now serves as the volunteer coordinator for the Sacramento Area Bicycle Advocates.

I’ve done a lot of the ultra stuff, but I’ve come to the point where I like to use the bike for anything: riding to the store, picking up a video, says Robinson, 60. There’s something unique about going to visit a friend on a bicycle.

Having been there and done that, Robinson understands the psyche of the long-distance cyclist.

You wake up one morning and think this is what you want to do, he says. You do a 50-mile ride and say, â€˜I feel pretty good. I’ll bet I can do more.’ It’s gotten to the point where the 200-miler has gotten pretty common. It’s hard to believe what some of these people will do to get their mileage.

Sitting in a Fair Oaks cafe, drinking a cup of coffee before setting off on a 75-miler through the foothills, Bell shrugs when asked if he takes pride in being the mileage king. Several days removed from his last shave, with a gray Fu Manchu mustache, he could double as a college professor.

When a couple of other guys started doing more miles, it became kind of a competition, he says.

Bell says his greatest satisfaction comes from riding into a small town and having the locals greet him with open arms.

They look at you like you dropped down out of nowhere, he says. I think they appreciate the effort you made to come through their town. You get to meet people on their own terms. You don’t get that when you pass through a place in a car.
So he keeps pedaling.

There are a few roads out there that are new, Bell explains. I just have to go farther and farther to find them.