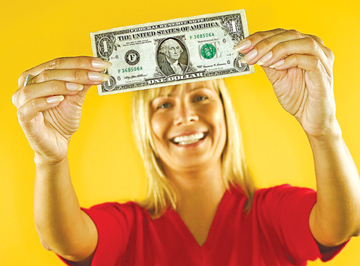 A Dollar and a Dream

Looking for $1 food bargains is a little like playing Lotto: You know you’ll never win, but it’s still fun to try.

And so it was for The Dollar-Wise Gourmet, whose mission was to skulk around town in search of cheap eats&emdash;as in really cheap, as in dirt cheap, as in starving-student cheap. Flash back to the days of top ramen and flour tortillas slathered with peanut butter&emdash;my two favorite food groups (not counting free beer at keg parties, of course) when I was a student at Sac State.

But that was long ago (don’t ask) and, considering the rate of inflation, buying food for a buck today seems even more impossible than, well, winning Lotto. When my editor told me Wendy’s 99-cent menu was off-limits&emdash;and to generally avoid places like that&emdash;it was clear that The Dollar-Wise Gourmet was going to have to get very creative, very fast.

With little confidence (and even less money), the search began. What, other than greasy doughnuts and fast-food fries, could be bought for a dollar?

The unsurprising answer: not much. But there are always exceptions to the rule. Here are a few . . .

Tuesday tacos: At Rubio’s Fresh Mexican Grill (locations throughout Sacramento), the World Famous Fish Taco is $1 after 4 p.m. on Tuesdays&emdash;and it’s a good one, with a generous piece of crispy beer-battered fish, shredded cabbage, mild salsa and a tangy white sauce. The Carnitas Street Taco, tasty pork topped with fresh guacamole and chopped cilantro and onion, is also a bargain any day of the week at $1.19.

More Mexican: Unbelievable deals can be found at Los Jarritos at 2509 Broadway, where fresh, lovingly prepared tacos and flautas are $1.25 and other staples, such as enchiladas and tamales, are $1.50. (OK, so I went over budget&emdash;it’s still a steal.) And don’t miss the colorful paletas (Mexican ice pops) for dessert: only $1.

Doughnuts and coffee at Marie’s: This institution at 2950 Freeport Blvd. probably hasn’t changed its prices much since it opened in the ’60s; even the most lavish pastries, such as cinnamon rolls and apple fritters, roll in at 85 and 90 cents, respectively. But the coffee may be Marie’s best-kept secret: At 65 cents for a small and 85 cents for a medium, it was the cheapest cup o’ joe I found&emdash;rich and robust-tasting, too.

Beignets for a buck: The most surprising find of this culinary adventure was the $1 New Orleans-style beignets on the breakfast menu at Willie’s Burgers (2415 16th St.). These fluffy, square pieces of dough, fried and sprinkled with powdered sugar, are cheaper by the dozen ($6); get ’em early, while they’re fresh.

Mini-Strudels at La Bou: Can’t cough up the required $1.45 for a croissant? Then try the next best thing: the 95-cent mini-strudel. The filling (apple or cherry) is nondescript, but all is forgiven when you bite into La Bou’s famously flaky pastry.

Spring for some spring rolls: At Panda Express, two Veggie Spring Rolls are $1.29, bringing them way under budget at around 65 cents each. While not exactly gourmet, these crispy brown bundles of shredded mixed vegetables are satisfying enough for a quick snack on the run. (You also can get a chicken egg roll for $1.29 at the Panda.)

Scones at Starbucks: While a buck won’t buy you a cup of the ubiquitous coffee&emdash;the cheapest is the solo espresso at $1.35&emdash;75 cents will score a petite vanilla scone, a tiny, triangular, cute-as-a-button treat. (A friend also has spotted little brownie bites at Starbucks for the same low price.)

Well, so much for this month’s experiment. While it was fun reprising the role of starving student for a while, it’s time to get back to my real, grown-up life . . . as a starving writer.