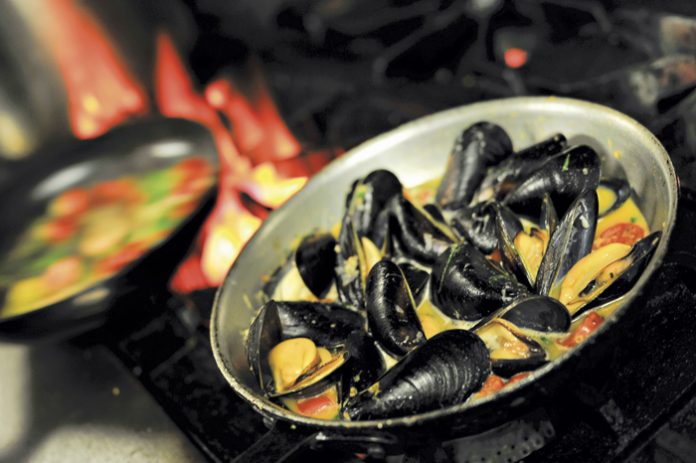 While it’s always fun for a food writer to cover high-profile restaurants, I have a special place in my heart for the one-man shops where a chef-owner in a small, obscure location concentrates earnestly on the quality of his (or her) food.
Such a chef is Mark Helms, whose tiny Ravenous Cafe is located in Greenhaven. His wife, Susan, gamely darts between tables serving up Helms’ generously portioned, Mediterranean-inspired food as he cranks it out, mostly alone, in his snug kitchen, separated from diners by a curtain. The day I obnoxiously stuck my head behind the curtain to thank him for a stellar lunch, he rewarded me with an expression of shock, followed by one of gratification.
On a recent Wednesday night, I watched as a constant stream of beautifully plated dishes appeared from behind that curtain. Helms was solo and the restaurant was packed, yet our food came out like clockwork. When I expressed my astonishment to Helms later, he said he needs to be personally involved in every dish that leaves the kitchen. No wonder he chose a restaurant space that can seat only 24 diners.
Helms is focused, as many chefs are, on sourcing locally grown and produced ingredients. His menu is very compact, and the dominant offerings are mussels (offered three ways) and pasta. There are  steak and a fresh fish of the day, as well as some great sandwiches at lunch. On the day I surprised Helms in the kitchen, I had just devoured a simple sandwich of grilled chicken and bacon, which came stacked on a just-baked roll with basil aioli and a thick, juicy slice of perfectly ripe heirloom tomato. The other dish I tried that day was a knockout: pasta tossed with fat shrimp, roasted tomatoes, whisper-soft caramelized onions and red chili flakes, blanketed with a layer of crunchy garlic bread crumbs. The sauce, which I mopped up—ravenously, of course—was wildly flavorful, with a captivating, lingering heat from the chili flakes. Helms’ food wasn’t overly fancy, but it was real and honest, and the flavors were, as my husband pointed out, “right there.”

Since mussels are clearly a big deal at Ravenous, one evening I ordered up a bowl of them sautéed with minced garlic, ginger, diced tomato and basil. I loved the electrifying broth, with its gingery, lilting brightness, and the mussels were the plumpest pumpkin-colored bivalves I think I have ever seen. Other outstanding dishes included a tender rib-eye steak (the steak of the day), plunked in a delicious pool of red wine demi-glace and served with smoky, pencil-thin grilled asparagus and lumpy mashed potatoes; and an earthy pappardelle pasta tossed with chunks of roasted chicken, sautéed arugula and preserved lemon.
Everyone has his limits, even Mark Helms. His may be that he’s overextending himself by trying to produce his own desserts in addition to making his own pasta—and everything else on the menu. The two desserts I tried were underwhelming. A cheesecake with a thick graham cracker crust offered the faintest whisper of lemon, and a mousse-like slab of chocolate pâté left me feeling curiously vexed. Both were served with swirled mango and raspberry sauces, a pouf of whipped cream and a perky cluster of mint leaves—a tired 1980s default plate presentation you often see at big chain restaurants.
When dining at Ravenous Cafe, you have the choice of sitting in the cramped dining space or the bar. There are several small tables crammed against the wall next to the bar, but the narrow space also serves as the cafe’s main thoroughfare, robbing diners of their privacy. I liked sitting at the bar, which gives you an elevated view of the restaurant’s goings-on. A bright image of a raven is projected onto one wall, and ravens also appear on a series of stark prints lining a wall. Intriguing, twiggy light fixtures give the feeling that a flock of birds may swoop in to roost late at night—no doubt looking for a bite or two of Helms’ neighborhood-friendly fare. Stop by and experience this charming Greenhaven cafe—but make reservations first.