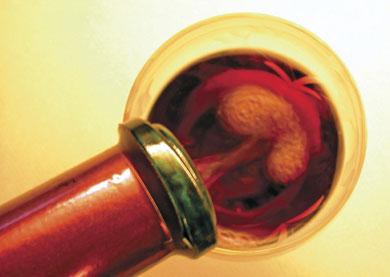 A big wine moment: I recently was treated to a bottle of 2002 Screaming Eagle by my colleague and new fairy godfather, Michael Chandler. “How many people have worn the Hope Diamond?” said Chandler when asked why he collects “cult Cabernets” like this one. “It’s not the very best wine in the world. But it’s very rare.”

Chandler, who oversees a premier cellar as wine director of Enotria restaurant, can easily pick the cult Cabs out of a lineup of premium California competitors, saying it’s the long finish that sets them apart. “Screaming Eagle is probably No. 1 when it comes to the finish,” he said. “Ageability? Nah. Too much alcohol, not enough balance. Every time I’ve tasted them blind, though, they stand up.” With Screaming Eagle commanding a street price of between $1,200 and $2,200 per bottle, I was amazed he was willing to share with me. But, grateful and excited as I was as we prepared to open the bottle, I couldn’t help but think about how many homeless kids it could feed.

We tasted the wine “blind” at first, wrapped in a paper bag (classy!), along with a few high-end Napa Cabernets from 2002. The undercover Screaming Eagle didn’t wow us, despite the fact that it had been decanted two hours earlier. Michael said it was “closed.” That sounds like wine geek for “isn’t as good as I thought it would be,” but it refers to an actual adolescentlike stage, when a wine shuts down for a while.

In the nose, I was overwhelmed with the burn of high alcohol. Even after this blew off, I didn’t get much more than syrupy fruit aromas. On the palate, it was a typical cult Cab: mega-ripe fruit flavor, as if you’d stirred some raspberry sauce into prune juice. I could taste that the wine had been aged in pricey new French oak barrels; the oak dominated the hot finish.

The best part was the way it felt in the mouth. The structure was impressively elegant, with refined tannins unusual in a young Cabernet. It was a very nice wine.

Personally, though, I’d trade one bottle of Screaming Eagle for a half-case of glorious 2000 Chateau Margaux, and still have some cash left over to donate to the homeless shelter.

The Making of a Cult Wine

How did they get cult status? My top five guesses:

Want to be a Cult Wine Collector? Be Ready For: