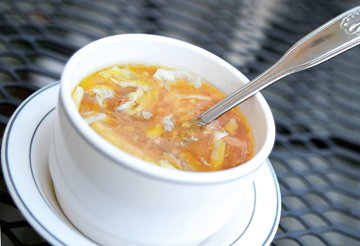 Hot-and-sour soup, sought by the well and the unwell for its reviving powers and the intrigue of its potentially repellant adjectives, springs from the capsicum-drunk region of Sichuan even as restaurants specializing in food from all Chinese regions live by its hot, not sour, profits.

The oppositional allure of hot and sour has no equal in curative qualities. By contrast, the putative cold-remedy powers of my own blessed Eastern European ancestry’s chicken soup, derived purely of chicken with maybe a beef bone tucked in, has all the excitement of salt and pepper.

Sniffling with a winter cold, I recently was in desperate need of restaurant-quality hot-and-sour soup made with restaurant-grade stock. Order takeout? Don’t be ridiculous.

Maybe it was the Theraflu talking, but I was determined to achieve at home the opaque, glistening base that holds so many Chinese soups in suspension. My hot-and-sour soup depended on it.

Five Bowls, One Pot&emdash;From my husband’s collection of nearly 400 Chinese cookbooks, I found inspiration in Chinese Regional Cooking, published in London and so old the price tag says Gemco. I began improvising immediately.

The recipe’s hand of pork (picnic shoulder) and duck became bone-in Boston butt and no duck. But I complied faithfully with the rest of the ingredients: a whole chicken and pork neck bones. They want me to strip the chicken and mince the breast and leg meat separately? I said to myself, getting out two bowls and grinding the meat, one after the other, in a food processor. I’d never had hot-and-sour soup with ground chicken in it. Where are they going with this?

Next, I was to break all the pork and chicken bones with a hacking cleaver. Ah, exposing the marrow. I slammed the bones and added them to a big soup pot with five quarts of cold water. The idea was to bring the water to a simmer s-l-o-w-l-y. The recipe warned me to skim the scum. I skimmed obediently for an hour.

The Magic Begins&emdash;I ladled four cups of this weak stock into a new bowl. (That’s Bowl No. 3.) I was told to add the ground dark meat, which gnarled into gritty pieces upon contact, and to sweeten this brew with long rods of green onion and a few knobs of peeled ginger, then leave it.

I replaced the missing liquid in the main pot with boiling water, which bubbled the bones 90 minutes more. Then I scooped out the bones, turned off the heat, cooled the stock 20 minutes, heated it up again, this time with salt and the addition of the poached ground dark meat, stirred, waited for the meat to float, then scooped it out (Bowl No. 4).

More Magic&emdash;I repeated the floating technique with the white meat. Bobbing before me was the Chinese equivalent of what classically trained French chefs call a raft. The protein in ground meat (or eggshells, onion skins or beaten egg whites) coagulates with unwanted material in the emerging stock. I scooped out the white meat and added it to Bowl No. 4. I looked at my dog. This was going to be one spent chicken.

Is It Soup Yet?&emdash;At last, flowing through the bottom of a fine sieve and into Bowl No. 5 was the famous Chinese white stock. I would need five cups of it for the hot-and-sour soup. The rest went into the refrigerator, where it jelled with only a thin pad of fat on top.

As for my hot-and-sour soup, I’d had plenty of time to assemble the other ingredients while I nursed the stock. It came to this:

Now that I know the secrets behind Chinese white stock, I’d definitely do it again. But next time I’ll plan on renting a good movie while I wait for the results.

Live Music at The Side Door