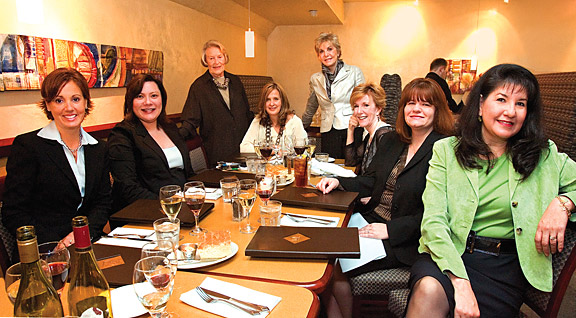 The Chops salad, made with romaine, bacon, blue cheese, avocado, tomatoes and white French dressing, was easy to consume, unlike salads with humongous leaves. Another winner (salad division): blackened king salmon niÃ§oise. Favorite appetizers: ahi poke and crab cakes with saffron aioli. The grilled crab and artichoke sandwich was a hit; less appealing were the pasta primavera and oversauced beef stroganoff. Desserts? Of course! Apple cobbler was best, but the chocolate cake was not bad and neither was the towering New York cheesecake.

Ambiance: Clubby; the booths have drapes, in case a lobbyist is making a point or a couple wants privacy. Food also is available in the effervescent bar, but if you’re squeamish, close your eyes and hurry past the meat-aging cooler to the right.

Chatter: Pat Lewis skipped the wine because Baby No. 1 was due in about a month. She revealed she is following her doctor’s orders when it comes to food, but the first thing on her list after delivery: carrot cake from Freeport Bakery. P. D. Asp commented on the women’s restroom&emdash;it’s worth a visit, whether you have to go or not. Also try to check out the private party room downstairs. It’s done up in bright, eye-boggling colors, unlike the leather-and-mahogany upstairs. Server Amelia Dennison performed like a jewel; her regular gig is at 4th Street Grille, whose owners also own Chops. In talking about the new trend&emdash;snoring rooms for noisy bed partners&emdash;all lunchers agreed on the need for separate bathrooms.

Quote of the day: It takes a village to fill in for Jeanne Reaves.&emdash;Peg Tomlinson-Poswall, commenting on the four attendees from River City Bank


The Dining Divas&emdash;Gloria Glyer, Paulette Bruce, Bernice Hagen, Joan Leineke, Gayla Mace and Peg Tomlinson-Poswall&emdash;have been wining and dining together since 1993. Every month, they lunch at an area restaurant, taking as their guests people who placed winning bids at charity events. To date, they have raised more than $268,000 for local charities and nonprofits.