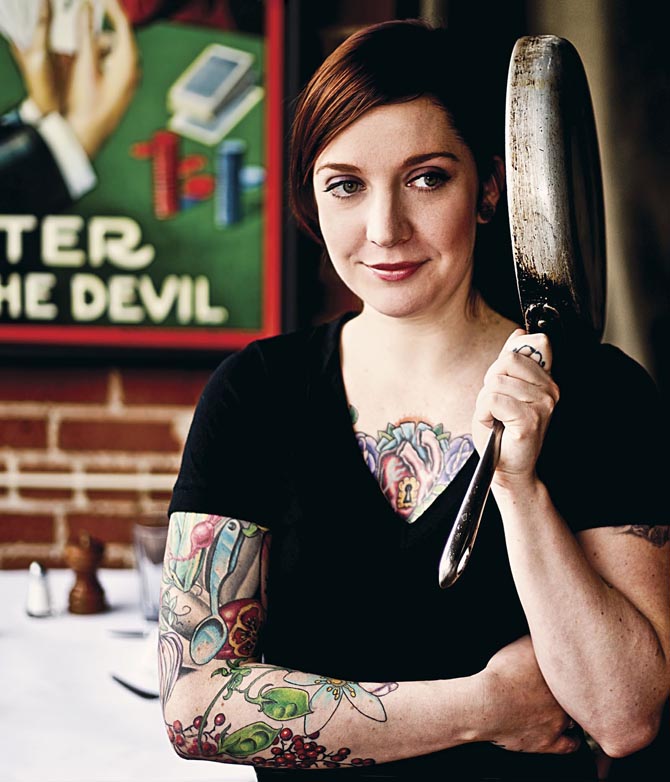 Duff Goldman, the Food Network’s famed “Ace of Cakes,” has the letters b-a-k-e c-a-k-e tattooed across his knuckles. Hunky Aarón Sanchez of “Chopped” has a ton of tats, including an Aztec god holding fruits and vegetables. But celebrity chefs aren’t the only ones getting inked. Local culinistas are, too. Here’s just a tip of the tattoo iceberg. Tattoo tales: “My first tattoo was a doughnut on my lower back. It’s like a Simpson cartoon doughnut, with sprinkles. I just wanted something really fun. There’s an underlying message about gluttony and indulgence, which is what doughnuts are to me.”

Other tats: A butcher’s cut diagram of a pig on her right bicep; molecule tattoos representing umami, the fifth taste, on her forearms. “I’ve got glutamic acid on my right, and guanylic and inosinic acid on the left. Science people love the molecules. The umami is a reminder to myself to make things as flavorful as I can.”

On the culinary tattoo trend: “I think chefs are kind of social misfits and rebels, working odd hours and doing hard labor. Maybe that explains it a bit.” Tattoo tales: “I got my first tattoo at 17. It’s a chef’s hat with two knives crossed behind it, similar to a skull and crossbones. It’s wrapped with text that says, ‘Live to cook, cook to live.’ I’m not thrilled with it cosmetically—it’s pretty crappy looking—but it takes me back somewhere. I was in high school, working at Masque at the time, and I was deciding that being a chef was going to be my path in life. It was a turning point.”

Other tats: A family crest, with a large oak tree and embroidered with Latin text, that starts on his shoulder and runs down to his forearm. “I’m a lot more proud of this one. My family’s really important to me—they’re what got me into cooking, really. My brother has the exact same tattoo.”

On the culinary tattoo trend: “Cheffing is one of those professions where it doesn’t matter if you have tats because most of the time, you’re in the kitchen and no one sees you.” Tattoo tales: “I hadn’t had any work done in a while, so I recently got a new one. I went to the tattoo artist and told her I wanted a knife, a pig and a fish head. I didn’t even know what I was going to get—just told her to go for it. It’s basically a sashimi knife, with a whole pig and a fish head lying on top of it. The pig is darker, the fish is lighter, and it’s going in circular motion. It’s a yin-yang kind of thing.”

Other tats: Ngo has several, including one inspired by a Japanese fable: an arm-length tattoo with a koi fish, struck by lightning, that turns into a dragon.

On the culinary tattoo trend: “I’ve been seeing it a lot more and more.” Tattoo tales: “I got my first tattoo when I graduated culinary school. It’s on my foot, and it’s an artichoke—one of my favorite vegetables.”

Other tats: A Japanese chef’s knife, a pig with primal cuts (“it’s a little pig, basically cut up and marked”) and a sleeve of vege-tables on her right arm. “I find vegetables really beautiful, so instead of flowers or whatever people get, that’s what I wanted. It’s a work in progress.”

On the culinary tattoo trend: “I definitely think tattoos are synonymous with cooks. In our industry, no one cares if you’re tattooed, whereas if you’re a banker or in the public eye, it’s frowned upon—there’s a negative connotation. In the culinary world, you’ve gotta be a little unconventional and think outside the box.”