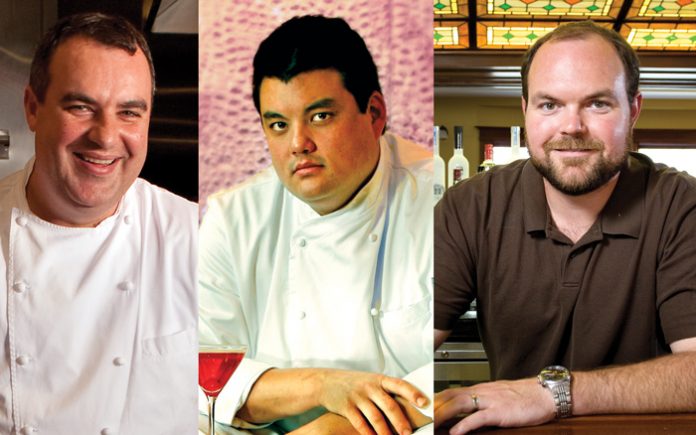 Chef: LUC DENDIEVEL
Former Digs: Restaurant 55 Degrees
Where he is now: Willard InterContinental hotel, Washington, D.C.
On the new gig: “I’m in my element here. It’s a beautiful hotel, extremely rich in history. I have 50 cooks working under me and we do lots of big events—it’s a big operation—so it’s very challenging.”
Side note: Dendievel, a native of Belgium, has cheffed all over the world, from Paris to New York City.
Miss Sacramento? “I do miss the lifestyle and the warm weather. But this is a great opportunity for me, and there’s room to grow.”
Photo by Terrence Duffy Chef: JOHN GURNEE
Former Digs: Mason’s, Kupros Bistro
Where he is now: Wayfare Tavern, San Francisco
On the new gig: “It’s very exciting—the busiest restaurant I’ve ever worked in. We’re doing higher-end food at incredible volume. Plus, I get to work with celebrity chef Tyler Florence.” (Florence owns Wayfare Tavern.)
Side note: Maybe it’s fate: Gurnee and his wife met in San Francisco some nine years ago.
Miss Sacramento? “It was a tough decision to leave. I like Sacramento.” (He’s a native.)
Photo by Mike Graffigna Chef: PHILIP WANG
Former Digs: Mason’s
Where he is now: En route to Chicago to open his own restaurant
On the new gig: Wang’s new restaurant—location and name TBD—will feature American cooking with European technique, “similar to what I did at Mason’s.”
Side note: Wang left Mason’s be-fore it closed and spent two years as executive chef at Merriman’s Kapalua in Maui, followed by a stint at San Francisco’s legendary Fog City Diner.
Miss Sacramento? “I’m giving up the [California] weather. But I grew up in Chicago, and my family is there. Plus, it’s not like I’m giving up culture. Chicago is a gigantic, fun city, with a ton of things to do.”
Photo by Terrence Duffy