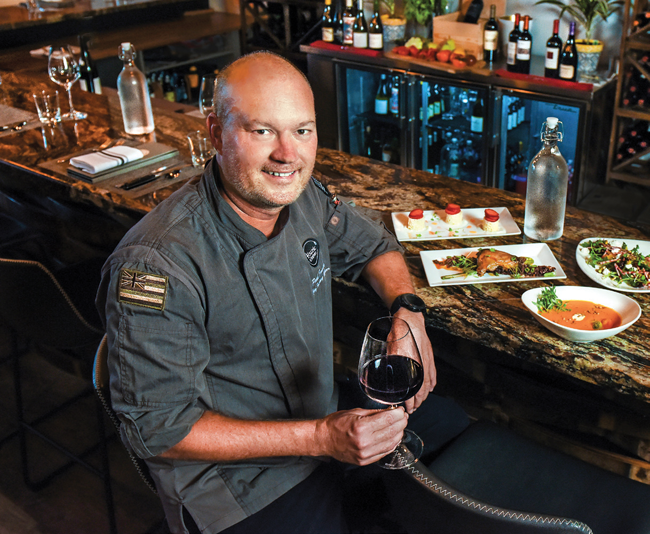 When chef Paul Jansen opened Fourk Kitchen in Lincoln last March, he had a clear vision of the concept: a reservations-only restaurant serving four courses four nights a week for $44. The compact eatery, which is run by a staff of four, seats 24 in the dining room and 14 at the bar. In fact, practically the only thing about Fourk that isn’t related to the number four is the number of Yelp stars it has earned: a perfect five.

Jansen, who also owns two Citizen Vine wine bars in Lincoln and Folsom, says Fourk’s prix-fixe concept was inspired by past wine club dinners he’d hosted. “They were really easy to execute and they always sold out, so I decided to create an entire restaurant around that model.”

At Fourk, the menu “is about good food that’s slightly elevated,” explains Jansen. “We’re not doing anything too fancy. Because we do just one seating a night with the same menu all month, I have the luxury and the time to really dial in those dishes and execute them well.”

Jansen, who learned to cook from his mother, says he had “zero former culinary experience” when he opened his first restaurant. “What I lack in culinary experience I make up for with hard work and a lot of detail.” Case in point: At Fourk, all of the place settings are outfitted with vintage forks from the late 1800s and early 1900s sourced from all over the country—a small but thoughtful touch.

Fourk’s doors open an hour before the 6:30 dinner service, giving guests a chance to mingle and nosh on white truffle Parmesan popcorn while taking advantage of happy hour prices on wine and beer. “People are always talking to one another at the bar. It’s a very casual, friendly environment,” says Jansen.

Before service begins, Jansen greets his guests, chats about the menu and warms up the crowd. “It’s kind of like The Kitchen lite,” says Jansen of the performative aspect of his work. “I like interacting with everyone. I didn’t open my restaurants for the money or to be well-known. Everything I do is for the experience of the guest.”