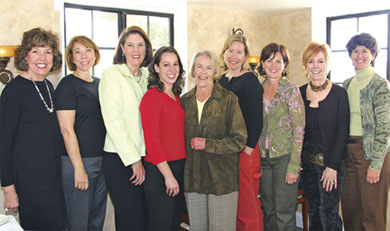 Whoops: What? A burger with no fries? The forgotten fries were delivered with haste.

Chatter: Runners agreed that the best place to get shoe advice is Fleet Feet in midtown. Designer and Sacramento legend Miles Treaster came by to say “hello” and that he wished he had joined us. Shrimp cocktail with a sauce described as zippy did not even come close to the shrimp cocktail at St. Elmo’s in Indianapolis. St. Elmo’s is the best, said Stephanie Ewing-an opinion I share. “Look at the orchid” was a phrase repeated again and again. Gayla Mace recalled that when Mace’s was still open with Mitch Davis as chef (he’s the chef at Bridges now), orchids were everywhere. One night, diners made a lei out of the orchids. On text messaging, Mace thinks even older people can do it. “But we don’t necessarily want to,” she said. Paulette Bruce-Miller pondered Elaine Smith’s advice to text message your significant other at work with suggestive and creative messages. Smith enjoyed hearing from Kathy Hill about Joan Leineke’s pig, Truffles, who vacations at a pig resort in Yuba City.

Quote: Katie Whitlow: “At 25, my dad took me out to dinner and told me I had to lower my dating standards or I would never find a husband.”

1-SECOND REVIEW: River style with class, not funk (and minutes from downtown)

*The Dining Divas-Gloria Glyer, Paulette Bruce-Miller, Bernice Hagen, Joan Leineke, Gayla Mace and Peg Tomlinson-Poswall-have been wining and dining together since 1993. Each month, they lunch at an area restaurant, taking as their guests people who placed winning bids at charity events. To date, they have raised more than $200,000 for local charities and nonprofits.