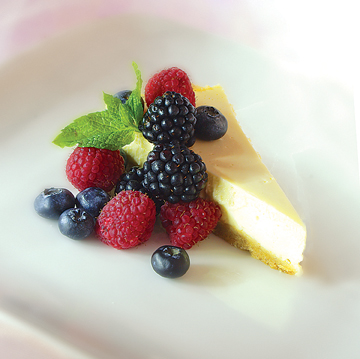 Talk of fine cuisine in the Sacramento region rarely includes Elk Grove. For years, this rapidly growing area has been dominated by chain restaurants, which sprout up like mushrooms at the same rate as the nearby housing developments. And while it’s comforting to know that this growing population is being served by a restaurant scene of sorts, it’s been mighty difficult to find distinctive, edgy, heartfelt cuisine in the area.

All this has changed with the return of Elk Grove’s prodigal chef, Bret Bohlmann, owner with his wife, Debora, of Boulevard Bistro. Fresh from the Bay Area, where Bohlmann honed his cooking chops at establishments such as San Francisco’s flamboyant and highly regarded Cypress Club, the couple decided to return to their hometown to introduce fresh, seasonal, innovative cuisine to a population starved for something new and different.

The Bohlmanns purchased a cute little turn-of-the-century bungalow on the city’s main drag and spent a year transforming it into a beautiful restaurant that still feels very much like a home. The interior is sparklingly clean, with tranquil dove-gray walls, a leafy copper-colored carpet and gorgeously upholstered chairs and benches. Tables are draped in crisp white tablecloths, and a dramatic floral arrangement sits atop the fireplace mantel. Out front, you’ll find an old-fashioned porch with chairs, for those who like to sit and watch the world go by.  And, my, does it go by quickly: Elk Grove Boulevard is a no-nonsense urban thoroughfare, dotted with strip malls and streaming with frustrated, speedy drivers. Yet amid the hustle and bustle, the Bohlmanns have managed to create a friendly, neighborhoody restaurant, one that strives to showcase the exceptional bounty of food and wine available in their own backyard.

The Bistro’s wine list is unique in that 45 of its 50 wines are from nearby wineries in Amador and El Dorado counties, Clarksburg and even Elk Grove. Bohlmann is determined to educate his customers about locally produced wines. (People don’t know how good they are! he says.) He also embraces locally grown produce, buying from small farms like Sacramento’s Del Rio Botanicals. Since he does much of the prep and cooking himself, he limits the menu to six or seven entres that he can execute successfully, in addition to a modest selection of appetizers and salads.

On a recent visit, I was dazzled by Bohlmann’s knockout cucumber soup. Served chilled, the gentle, refreshing liquid cradled several eye-wateringly spicy shrimp in the center, marinated, noted the menu, with Thai chilies and cilantro. The interplay between the fire of the shrimp and the soothing creaminess of the soup was marvelous and inspired. Another not-to-miss appetizer is the chef’s sweetbreads, sauted in a heavenly, meaty red-wine thyme sauce and punctuated with browned, intensely flavored shiitake mushroom chunks and bright-green fresh-shelled peas. We used up an entire loaf of bread greedily absorbing every last drop.

The salads are simple and fresh; I especially enjoyed the organic baby greens, tossed with crunchy candied walnuts and Gorgonzola cheese in a Champagne vinaigrette. Its only downfall was the oddly soggy pear slices that limply topped the salad. Another starter of note is Bohlmann’s housemade NeufchÃ¢tel cheese, which takes him three days&emdash;and lots of milk&emdash;to prepare. Tangy and smooth, the white cheese arrives like a pristine snowball, drizzled with a nubbly pesto sauce and surrounded by a scattering of kalamata olives and sweetly ripe cherry tomatoes. The cheese appears in a much sweeter guise in Bohlmann’s excellent cheesecake, garnished with a mouth-puckering plum sauce made from fruit grown on the property.

Lunchers will find a handful of entres not available at dinner, including a hefty and satisfying salmon club sandwich and a thin, chewy, flavorful grilled New York steak, served with handsome hand-cut fries that, sadly, became sodden only moments after arriving at the table. But the real lunch gem may be Bohlmann’s top-notch Angus beef burger, the juice-runs-down-your-arm variety topped with fragrant smoked mozzarella and embellished with the requisite lettuce, tomato and onion slices.

At dinner, however, there’s the rack of lamb, an indulgence you must allow yourself. In fact, I recommend you splurge&emdash;as I did&emdash;and order the full rack, so you can gnaw on leftovers at your leisure the following day. We oohed and ahhed when the rack arrived, browned bones curved protectively over the accompanying asparagus spears, roasted chanterelle mushrooms and softly appealing zucchini rounds. The meat, cooked to a perfect medium-rare, was moist and tender, delicious with the plate’s rich, rich mashed potatoes. If red meat isn’t your style, try a fish entre: The night I visited, Bohlmann served a fantastic pan-roasted opakapaka, Hawaiian pink snapper, floating seductively in an aromatic coconut lime broth and topped with a mango salsa whose mango dices were, unfortunately, jarringly unripe. The chef also employs a light hand with risotto, which was so delicate and abundant with fresh vegetables that I ordered it on two separate occasions.

If you’ve managed to save room for dessert, be adventurous and order Bohlmann’s cinnamon-raisin bread pudding, served with a caramelly Guinness (yes, the beer) crÃ¨me anglaise. Other selections include chocolate decadence cake, the cheesecake and a simple crÃ¨me brÃ»le.

Boulevard Bistro is a family affair: Daughter Lauren, 15, bused tables and worked the hot line with her dad this past summer to earn some extra cash, while her sister, Candice, 12, manned the pantry section, plating salads and desserts. It’s a way we can spend some time together, Bohlmann explains with a rueful laugh.

Wife Debora runs the front of the house, answering phones, pouring wine in the cozy bar area and checking on diners like a warm mother hen. I commend their efforts and can only hope that the success of this gutsy, independently owned restaurant will encourage others like it to open in Elk Grove.

What To Order: The veal sweetbreads&emdash;even if you’re convinced you don’t like sweetbreads.

When To Go: Early enough that you have time to lounge on the porch before heading home.