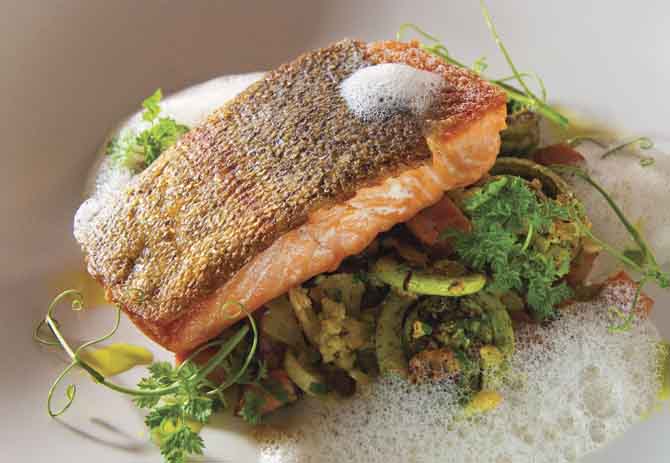 With the arrival of Blackbird Kitchen + Bar, downtown Sacramento now has a boutique seafood restaurant that is as deliciously urban, innovative and downright cool as the region’s foodies could hope for.

Located in a historic space on Ninth Street, Blackbird is the inspiration of chef Carina Lampkin. Young and intense, Lampkin spent close to a decade cooking in San Francisco at hot spots including Absinthe Brasserie & Bar in Hayes Valley, Range Restaurant in the Mission District and Bar Crudo, a North-of-the-Panhandle restaurant specializing in creative raw seafood that served as her template for Blackbird.

Lampkin offers a frequently changing lineup of dishes that will make adventurous seafood eaters grin from ear to ear. Before tucking into dinner, you’ll want to feast from Blackbird’s raw oyster bar. During happy hour, oysters are $1 each. I recently took advantage of the opportunity, wolfing down six plump, briny nuggets in short order, paired with a $6 glass of crisp, friendly French Muscadet.

The raw selections I tried were exciting and dazzlingly presented. Tender slices of dayboat scallop, perched prettily on a green pea purée, came with asparagus and a snappy drizzle of lemon oil. A beautifully composed raw Kona Kampachi was another winner: The fish, lightly dressed with lemon grass and kaffir lime-infused grapeseed oil, mingled delectably on the plate with juicy gems of Cara Cara orange and crunchy bits of fresh cucumber.

Never much of a chowder fan, I was stunned on two occasions by the lushly flavorful clam and seafood chowder. Lampkin applewood-smokes the clams daily, then steeps them in cream overnight to maximize the soup’s alluring, smoky flavor. The soup is velvety, aromatic, and filled with soft chunks of potato and fish. The entrée selections at Blackbird are limited, but each one I tried was impressive. The Maine lobster and roasted beet salad teemed with large, sweet chunks of lobster and was sprinkled with roasted pistachios and an intriguing Banyuls vinaigrette. The Arctic char had an irresistibly crispy skin and was served with tender fiddlehead ferns and romanesco broccoli—a delicious tumble of flavor and texture.

For people who don’t like seafood, Lampkin serves a fabulous burger topped with melted white cheddar and loaded with bacon, avocado and grilled spring onions. I also enjoyed a rustic bowl of handmade pappardelle, tossed with nettle pesto and soft clumps of aged goat cheese and sprinkled with crunchy pepitas.

Blackbird’s intriguing one-page wine list crams in a delightful variety of selections, offering far more European than California wines—a bold move, and one that will require Lampkin to consistently train the waitstaff so they can knowledgeably guide customers in making wine selections. There’s also a captivating lineup of bottled beers, including some 750-ml bottles such as Six, a spicy rye beer from Portland’s Upright Brewing, and The Lost Abbey’s Avant Garde.

The dining areas in this loud restaurant are located at the back of the lower level, behind the oyster bar, and perched upstairs, away from the crowds (but not the noise). Blackbird Kitchen + Bar doesn’t take reservations, so if you’re interested in nabbing a table upon arrival, plan to show up early in the evening. (Happy hour runs daily from 4 to 6 p.m., but dinner service doesn’t start until 6.) Otherwise, be prepared to wait in the crowded oyster bar area.