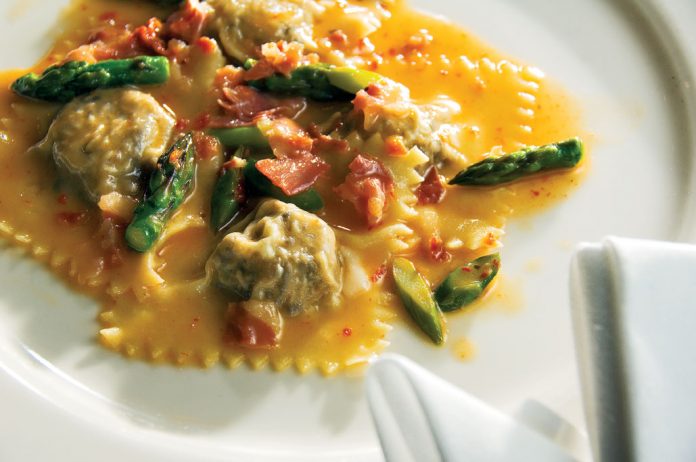 There aren’t many restaurants—or people, for that matter—that can convince me to yank on a pair of pantyhose. I recently discovered, however, that Biba—the restaurant, not necessarily the chef—is one of the select few influential enough to call my fashion shots. After years of visiting the region’s top upscale restaurants and eschewing the tyranny of those control-top nylon prisons, I found myself pulling a pair on in anticipation of a dinner reservation at Biba.

There is no arguing that Biba Caggiano is the doyenne of Italian cuisine in Sacramento. For many years, her restaurant has been a shrine to rustic, honest regional Italian fare in a town dominated until recently by chain restaurants. Caggiano, along with venerable grocer Darrell Corti of Corti Brothers, has spent the past 22 years defining for Sacramentans the taste of “real” Italian food. Gently spoken, hawk-eyed and passionate, she has devoted her career to educating the food-loving public about the cuisine of her beloved homeland. Not content with merely owning and running a restaurant, she has also written eight cookbooks and hosted 100 episodes of an internationally syndicated cooking show called “Biba’s Italian Kitchen.”

While acknowledging her status as a regional treasure, I recently wondered how well her restaurant and cuisine have stood the test of time. In 2006, Biba celebrated its 20th anniversary, and the dining landscape in which it was created has changed significantly. Italian-themed restaurants have sprung up in the region like mushrooms over the past decade. Restaurants like Piatti, Il Fornaio, Spataro, Romano’s Macaroni Grill and the recently closed Masque Ristorante have garnered their share of press and produced their own interpretations of Italian cuisine. Does Biba still give them a run for their money? It was time, I decided, to hike on the hose and revisit a Sacramento dining institution.

Exuding old-world graciousness, the restaurant was as I had remembered it. Elegant and hushed, the dining room was dappled with sunlight glinting flirtatiously through Colonial-style white shutters, and an eye-catching riot of sunflowers erupted out of a single vase. Tables were draped in white, and booths were upholstered with a striped fabric so soft I felt like snuggling in and closing my eyes. The menus were heavy and leather-bound, delivered by white-jacketed, black-bow-tied waiters who trod soundlessly on a rose-patterned carpet. This clearly is no place for a child, yet the staff adapted to my 6-year-old daughter with quiet humor and warmth. For those of us restaurant diners used to loud background music, saccharinely friendly waiters and oversize televisions in every available corner, this was a refreshing and genteel step back in time.

As we perused the menu, scads of well-dressed diners (like me) arrived, and by 6 p.m. the place was packed. A bread basket arrived in short order, and we were captivated by the long, skinny breadsticks, whose crispiness and delicate garlic flavor set a festive tone for the meal to come. The menu was restrained: I admired that the kitchen has set out to do a few things well, rather than offer up dozens of options.

For an appetizer, we settled on the animelle con pancetta funghi al Limoncello: tender chunks of sautéed sweetbreads bathed in a sweet lemon-liqueur sauce, dotted with nuggets of smoked pancetta and silky oyster mushrooms. Rich and fragrant, the modestly sized dish was a perfect portion and provided a wonderful bread-sop after the sweetbreads were gone.

A bouncy romaine salad, tossed in a sharply pleasing Gorgonzola-Parmigiano dressing, came speckled with roasted pine nuts and was a great palate cleanser after the sweetbreads. Our daughter then tucked into a bowl of buttered fettuccine noodles as my husband and I contemplated our entrées. The housemade pappardelle was ravishing in its simplicity—the slightly chewy noodles were immersed in a light cream sauce with crumbled sausage, tomato and peas. The juxtaposition between the humble, straightforward presentation of the dish, in its plain white bowl, and its luxurious surroundings was notable. The seared loin of tuna, encrusted with crushed black pepper, came with a “medley” of diced roasted eggplant, tomatoes, raisins and pine nuts, loosely bound by a bracing addition of balsamic vinegar. The garnish? A feathery mound of frisée. The flavors were clean and uncomplicated, and the portion—again—was what it should be: just enough.

Dinner was capped off by a hearty slab of tiramisu, that moist, creamy Italian thigh-thickener redolent of strong espresso and brandy. The balance of sweetness and bitterness was just right, and the piece managed to keep its shape as we dug in, even though the dessert’s ladyfingers were saturated. As a former tiramisu maker at one of Biba’s competitor restaurants, I know a deftly made version when I see one.

Evaluating our dining experience, I decided it simply isn’t right to compare Biba to those other Italian restaurants; it’s sort of like comparing biscotti and breadsticks (or maybe pantyhose and tube socks). After two decades of passionate cooking and public education, the lady knows her stuff, and you can taste it. Plus, a visit to this distinguished restaurant is a great opportunity to get really gussied up. Those are good enough reasons for me to return again.

Bar eats: The convivial bar is a great place for a drop-in meal
Try lunch: It’s the perfect way to sample the menu without paying dinner prices
Lasagna love: Biba’s lasagna verdi alla Bolognese (available Thursdays and Fridays only) will blow you away