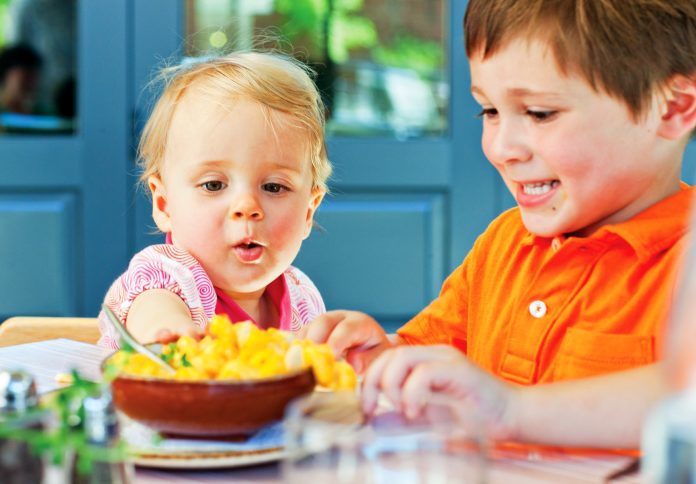 “Chicken tenders or mac ’n’ cheese?” If you’re the parent of young children, you’ve likely posed this question more times than you care to count. They are the safe bets, the dishes least likely to offend finicky palates and trigger a dining room meltdown. But for parents wishing to expand junior’s culinary horizons, a children’s menu can be a deep-fried disappointment. Even some of the most imaginative restaurants sate their youngest diners with the same old same old: uninspired grilled cheese or been-there pasta with red sauce. With two expert taste-testers in tow—my 6- and 4-year-old boys—our family sought out eateries where the kids’ offerings go beyond the usual suspects (and adults can eat well, too). Here are our delicious discoveries.

EATING INSIDE THE BOX

MIKUNI JAPANESE RESTAURANT AND SUSHI BAR has never been a destination for hushed, intimate dining, and what a relief that is to parents with young children. Between the thumping soundtrack and the adrenaline fueling the industrious sushi chefs, your boisterous young crew will fit right in.
We dined at the local chain’s midtown outpost, which on a Saturday evening was packed with a mix of families, trendy 20-somethings and out-of-towners. The staff was armed and ready for young diners: a highchair was quickly procured for our 1-year-old daughter, while our boys were promptly presented with crayons and spill-proof water cups.
Although tempted by the kids’ udon bowl ($6.50), our gang opted instead for the bento box ($6.50), which includes rice, salad and a choice of two items from a list of seven: chicken teriyaki, gyoza, shrimp tempura, California roll, edamame, inari (rice encased in a sweet tofu wrap) and french fries. Portions are sizable enough that kids can swap bites (“I’ll trade you one gyoza for five edamame!”) while trying their hand at chopsticks rigged for beginners.

Parents will appreciate: The sushi bars buzz with plenty of activity to keep impatient diners engrossed.
Good to know: Reservations are available only for parties of eight or more. 1
530 J St., Sacramento; (916) 447-2112; mikunisushi.com

What STAR GINGER ASIAN GRILL AND NOODLE BAR acks in variety for the school-age set (the official kids’ menu is one item long) it makes up for in quality and convenience. Simply put, this is tasty food served in a laid-back, kid-friendly setting.
It would be difficult to find a more healthful children’s meal than Star Ginger’s kids’ bowl ($5.95): fragrantly seasoned slices of grilled chicken with broccoli, peas and carrots atop a mound of white or brown rice. The fresh vegetables are steamed to perfection, bright and still slightly crisp, without any cloying sauce adulterating them.
The ample portion is substantial enough to feed two young children, especially if your diminutive dining companions also partake in a grown-up appetizer of, say, sweet-potato fries for those with more timid palates (though beware: the accompanying aïoli packs some heat) or salad rolls for the more adventuresome.

Parents will appreciate: Lightning-fast service. Even on a Friday evening, we were seated quickly and our food arrived within minutes of ordering.
Good to know: Dessert options include three flavors of Gunther’s ice cream: chunky ginger, coconut and vanilla.
3101 Folsom Blvd., Sacramento; (916) 231-8888; starginger.com

TEN22 is evidence that you needn’t sacrifice sophistication altogether in order to dine out with young children. At first glance, it doesn’t appear to be a terribly kid-friendly establishment: The dining room seems too elegant, the mood too subdued. But you’d be foolish to pass it up.
This is one of the few adult-centered restaurants in town where the kids’ menu is not a mere afterthought. On a recent visit, the choices included, among other things, beef brisket, grilled chicken with vegetables, fried prawns and beef sliders with white cheddar. The arrival of my son’s brisket—a tender, flavorful cut topped with a sweet-tangy barbecue sauce and served over a bed of sautéed green beans (which we substituted for french fries)—marked a rare instance when I actually longed to order from the kids’ menu. His plate was clean within minutes. The build-your-own pizza might seem like a tired concept, but in this case it was redeemed by a crispy handmade crust and quality toppings. All kids’ plates are $6.95 and include milk, juice or soda. For a buck more, they’ll throw in a scoop of vanilla or chocolate ice cream for dessert.

Finally, a word about service. For harried parents who dine out all too infrequently, the little touches mean so much. Like when our server kept my husband’s beer cold while he ran to the car to fetch our daughter’s bib. Or when he offered to bring out the kids’ meals first. When he presented our boys with balloon animals from a nearby sidewalk vendor, we practically felt like royalty.

Parents will appreciate: A wide-ranging selection of wines, cocktails and beers on tap plus a relaxing patio that feels worlds away from the Old Sac tourist scene.
Good to know: Bring your quarters—meters in these parts operate until 8 p.m.
1022 Second St., Old Sacramento; (916) 441-2211; ten22oldsac.com

GET JIGGY WITH IT

The junior fare at DE VERE’S IRISH PUB might be only an approximation of the Emerald Isle’s native cuisine, but it’s arguably the most authentic pub atmosphere a youngster can experience without hopping on a trans-Atlantic flight. Dark wood paneling? Check. Cozy dining nooks? Yep. Traditional Irish music? Indeed. (4 to 7 p.m. Sundays.)

We visited on a Sunday evening, when kids’ meals are just $2 with purchase of an adult entrée (they normally run $4.95 to $6.95), and were pleasantly surprised by the homey menu options. The perfunctory chicken strips and hamburgers were present, yes, but also on offer were a hearty shepherd’s pie (ground beef and vegetables—difficult to discern as they were—in a savory gravy topped with golden mashed potatoes), fish ’n’ chips, and something called “mashy smashy”: steamed veggies and—you guessed it—mashed potatoes.

The grazers in your family will like the “this and that” plate: Jack cheese and a sampling of fruits and vegetables served with Irish brown bread. I’m fairly certain that macaroni and cheese is not native to Ireland, but at least the de Vere’s version is made with real cheese. Soda is standard with kids’ meals. (Juice and milk are extra.)

Parents will appreciate: Getting your Irish on is still possible with kids in tow.
Good to know: It can be tricky to secure a table on Friday and Saturday evenings.
1521 L St., Sacramento; (916) 231-9947; deverespub.com