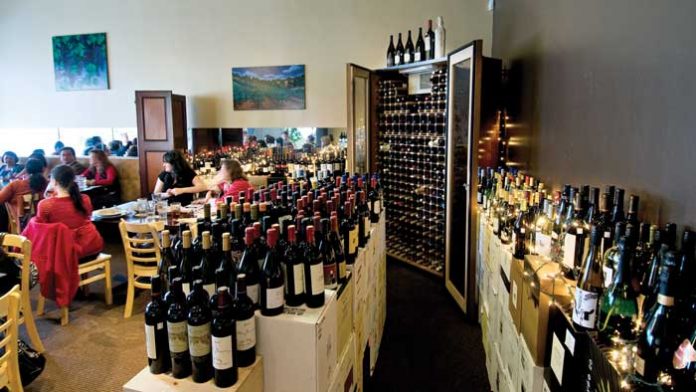 Wine lovers are an intrepid bunch, going to far-flung vineyards in the hope of unearthing something new and unusual to add to their cellars. But for those who don’t want to burn up a tank of gas just to find a good bottle of wine, a handful of local restaurants conveniently offer retail sales of unique vintages. Enotria in uptown Sacramento was one of the local pioneers of the wine-shop-within-a-restaurant model. Further up Del Paso Boulevard, at Supper Club, owner Matt Woolston has been doing what’s known as off-premise sales for years. “We’re not trying to be BevMo!,” says Woolston. “I just thought it might be nice for people to be able to purchase the wines and take them home with them.”
Woolston says diners at Supper Club often stock up on a wine they enjoyed with their meal that evening. But, he adds, there are plenty of customers who come in just for the wine. The off-premise concept has been successful enough that Woolston recently added a wine bar and retail sales component to his other restaurant, Matteo’s Pizza & Bistro in Carmichael. The Cellar at Matteo’s is overseen by sommelier Michael Chandler, former wine director of The Market at
Pavilions. Woolston believes the new endeavor will be a “nice feature” in a neighborhood that’s “really into wine.”
At Tucos Wine Market & Cafe in Davis, owner Pru Mendez says that while off-premise wine sales have declined at his restaurant over the years, he’ll continue to offer them. “We’re known for that,” explains Mendez. “I love going to wine tastings and finding new wines for our customers.” Just don’t come in expecting something ordinary. The stock at Tucos is “entirely hard-to-find wines,” he says.