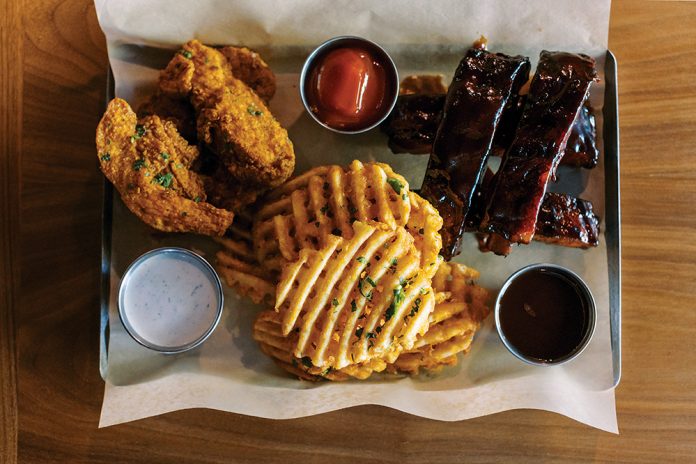 When Bandera on Fair Oaks Boulevard closed its doors in 2018, you could practically hear the wailing and gnashing of teeth all the way down at the state Capitol. For two decades, the popular restaurant and its even more popular bar had been the unofficial clubhouse of the Arden-Arcade set. How would they live without Bandera’s wood-oven roasted chicken and skillet cornbread?

Three-and-a-half years later, the answer is in: Just fine, thank you very much. Arden’s favorite hangout has a new tenant in Bennett’s American Cooking, which picked up where Bandera left off. It’s a lighter, brighter version of its predecessor, with an approachable menu seemingly designed not to scare off Bandera’s most loyal fans.

The man behind this newcomer is Brian Bennett, a lifelong restaurateur who got his start in the business at the age of 16, working at a mom-and-pop restaurant in the Bay Area. In the mid-’70s, he joined the Rusty Pelican restaurant group before landing at Chevy’s, which he helped build into a national restaurant chain. When the business was sold in 2005, he had tired of traveling and felt ready to put down roots. By that time, he was living with his wife and young daughter in Rocklin. It was a restaurant desert. “Back then, if you wanted to eat out, you had to drive into town to The Waterboy or Mace’s,” he recalls. So in 2008, he and partner Paul Fleming joined forces to give the ’burbs their own upscale restaurant in the form of Paul Martin’s American Bistro, modeled after the highly regarded Boulevard in San Francisco.

In 2019, he splashed out on his own, opening Bennett’s Kitchen Bar Market in Roseville. This time, his partner was his wife, Susan. The couple also wanted to open a second Bennett’s in the space recently vacated by Bandera. But, as Bennett says, “opening a first restaurant is difficult. The second is harder.” The pandemic, in particular, put a crimp in their plans, but they eventually succeeded, opening Bennett’s American Cooking in The UV shopping center last May.

After more than four decades in the food industry, Bennett is confident he knows what—and how—people like to eat. Food that tastes like homemade, only better: things like braised short rib with mashed potatoes, lasagna Bolognese and chicken enchiladas. And choices, lots and lots of choices. “Everyone has a food regimen, from vegan to keto,” he explains. At Bennett’s, there’s seemingly something for every taste and diet, from avocado toast, available all day long, to prime rib (weekends only). The lengthy menu features little notations for dishes that are vegetarian, heart healthy, nut-free or “gluten-free friendly.”

When Bennett walks into the restaurant, it’s clear he knows a thing or two about hospitality as well. On a recent visit, he greeted and shook hands with every single customer at the bar. A self-proclaimed “old-school restaurateur,” he works in the kitchen at least five days a week, casting a critical eye on the food as it heads out to the dining room. “I want to look at every plate,” he says.

At 68, Bennett also has an eye on the future. He thinks he might have one or two more restaurant openings in him. In the meantime, he’s happy to schmooze with his customers and bask in their pleasure at his hospitality. “It’s like having people come to my house for dinner,” he explains.