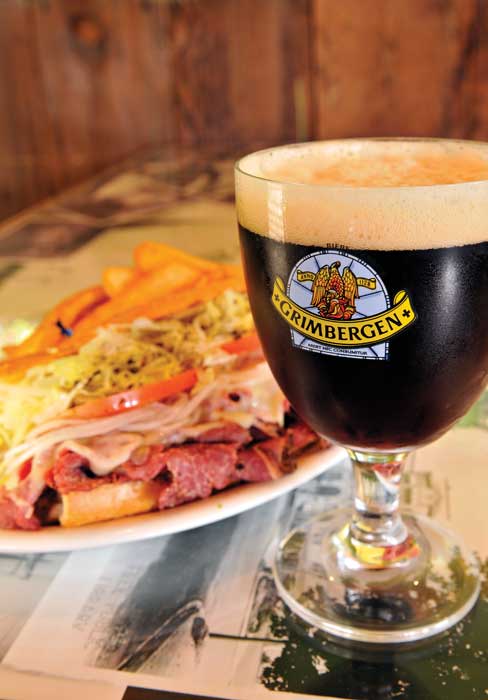 The Place: Pangaea Two Brews Cafe 2743 Franklin Blvd., Sacramento
The Vibe: An unpretentious oasis on the cusp of Curtis Park and Oak Park. The 15-foot brown marble bar is ideal for tastings. Chalked wall art, including a glass-hoisting Trappist monk and a pink-elephant homage to the Delirium Tremens label.
On Tap: 17 beers on tap and another 25 in bottles, nearly all Belgian. Can’t choose? Order a $9 flight.
Pair: The brie-and-asiago cheese plate with a Malheur 12°, a strong, dark ale to complement the salty creaminess of les fromages
Brew-HaHa: Owner Rob Archie modeled Pangaea after the cafes he frequented while playing basketball in Italy.

The Place: Burgers and Brew 1409 R St., Sacramento
The Vibe: Ample sidewalk seating on a relatively peaceful stretch between 14th and 15th streets. Red brick and warm wood paneling soften the once-industrial interior of this former bakery.
On Tap: While Belgian beers share billing with other global brews, three are on tap (including Stella Artois). Another 25 are bottled, both small format and ones suitable for sharing (750 ml). The latter includes the three-oat Tripel Karmeliet that’s been around since, oh, 1679.
Pair: The half-pound smoked bacon and jalapeño burger with Hoegaarden (wheat beer) on tap or the bottled Le Merle Belgian-style farmhouse ale, origination Fort Bragg
Brew-HaHa: Diners must order at the bar at lunchtime, so come early to avoid the long lines. This joint rocks the weekday-worker crowd.

The Place: Manderes 402 E. Bidwell St., Folsom
The Vibe: What this one-time fish-and-chip shop may lack in décor, it makes up for in conviviality. It prides itself on a “relaxed” ambiance and an intimate (read: crowded) space.
On Tap: Beers are rotated regularly through 20 taps, and the eatery’s Facebook page keeps fans constantly abreast of the changes. The 120-plus bottled varieties are heavy on Belgian or Belgian-style North American beers.
Pair: The Chimay Blanche-marinated Asian chicken salad and a glass of Chimay, brewed by Trappist monks in Belgium
Brew-HaHa: Manderes has received plenty of good press since opening in 2007, including a spot on Draft Magazine’s list of the 200 best beer spots in the country and robust coverage in the blogosphere.

The Place: The Shack 5201 Folsom Blvd., Sacramento
The Vibe: Don’t be fooled by the dense palms and beach-ball palette. Opened in 1931 as Doc’s Place (home of the 5-cent root beer), this East Sac brunch-and-burger landmark boasts a profusion of vintage photos and tin beer signs.
On Tap: Six of the seven breweries run by Trappist monks are on the menu, along with a good showing of fruity and other Lambic beers (distinguished by their “spontaneous” as opposed to carefully cultivated fermentation).
Pair: Pastrami sandwich with a Grimbergen
Brew-HaHa: Owner Gary Sleppy and Pangaea’s Ros Archie traveled to Belgium together last year, returning home with redoubled passion for the centuries-old drink. Attend a Tuesday-night beer tasting at The Shack and learn all about that wild and crazy Brettanomyces yeast.