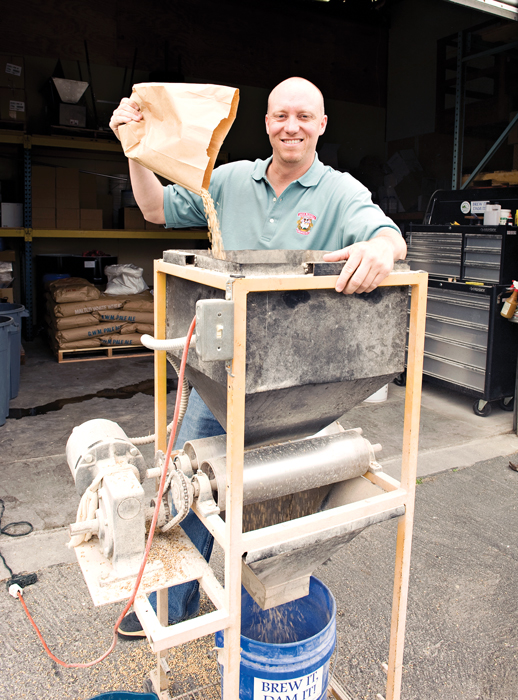 At 41, Erik Schmid has been brewing beer for more than half his life. He’s one of those enviable few whose livelihood also is his passion. Schmid owns The Brewmeister, a retailer of home-brewing and winemaking supplies in Folsom. When not minding the shop, he can be found brewing beer commercially for Jack Russell Brewing Co., the popular Apple Hill destination owned by David Coody.

On his beer epiphany
My dad was a home brewer way back when. I always enjoyed the process and all the smells in the house. I ended up taking his home-brew setup with me to college. I went to school in Chico and probably have a similar story to a lot of people in that Sierra Nevada [Brewing Co.] kind of blew me away.

On perfecting his craft
I’ve been working on a West Coast-style red ale pretty much my whole life as a home brewer. It’s the one beer I’ve been trying to nail for years. I’ve probably brewed it in five-gallon batches 80 times—and tweaked it every time. My inspiration was [the now-defunct] Sacramento Brewing Co.’s Red Horse Ale. It was an awesome beer, a perfect balance of malt and hops.

On the current home-brew phenomenon
We’ve seen a huge increase in the number of people taking up the hobby. Ironically, the down economy has definitely helped. I think with a lot of people being out of work, many of them have more free time. It’s a very cheap hobby to get into.

On beer converts
Belgian-style beers have opened the eyes of people who traditionally didn’t like beers because of the high amount of bitterness. You’d have a lot of people who would just pucker because they didn’t like the overwhelming hops. Then, all of a sudden, you had people coming out with Belgian beers that were a little sweeter, a little higher in alcohol content, with some cider or even white wine characteristics to them. I think it opened up the eyes of some wine drinkers.

On Sacramento’s microbrewery revival
I think the [microbreweries] that have survived, like Rubicon, have done so with a really loyal following. What’s really led to the current resurgence is breweries that are pushing the limits of different styles or even going way beyond them and creating new beer styles.