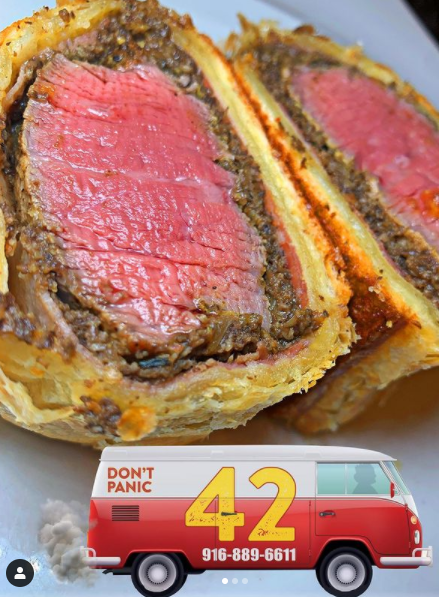 If you’ve ever watched “Hell’s Kitchen” on Fox or “The F Word” on Netflix, you know that British celebrity chef Gordon Ramsay is very . . . particular, shall we say, about beef Wellington. On those shows, he regularly screams, rants, curses and melts down at contestants who fail to reach his exacting standards for the old-school dish, a beef fillet wrapped in puff pastry.

J.D. Snead, a local chef who runs a food delivery business called 42, believes he has mastered the art of making Ramsay’s beef Wellington. He offers it in take-and-bake form to customers once a week, on Wednesdays—“Wellington Wednesdays,” he calls it.

For $42, you get a 7-ounce filet mignon, lightly seared, slathered with mustard, wrapped in prosciutto and mushroom duxelles and enclosed in puff pastry. Pop it in a 425-degree oven for 30 minutes and you end up with an entree, big enough to feed two, that presumably wouldn’t have Gordon Ramsay screaming “You donkey!” at you. For $55, Snead throws in Ramsay’s prescribed sides: creamy mashed potatoes, braised greens and pan-roasted carrots and turnips.

Snead, along with his wife, Amber Nunnally, has been running the business since the start of the pandemic. It was originally named The Michelin Minivan, but Snead had to rebrand his company after receiving a cease-and-desist letter from “a certain tire company.” He named it 42 in homage to “The Hitchhiker’s Guide to the Universe,” in which the number 42 is the answer to the ultimate question of life.

To avoid receiving another pesky cease-and-desist letter, Snead bills his beef Wellington as “Gordon Ramsay inspired.” But he tags Ramsay every time he promotes the dish in hopes of getting a TikTok shoutout from the famous chef. Last November, Ramsay appeared on the platform, excoriating an amateur cook’s attempt at making the dish with a tomahawk steak instead of a fillet. “That is not a Wellington,” Ramsay fumed. “You don’t wrap squares, you doughnut!”

Snead limits his production of Gordon Ramsay-inspired beef Wellingtons to 25 per week. The pastry-wrapped fillet can sit in the fridge, unbaked, for a couple of days, he says, making for “a really dope Friday night meal.” In addition to Wellington Wednesdays, Snead offers a “hitchhikers menu” that changes frequently. The current menu (available until the Super Bowl on Feb. 7) features hibachi-style grilled entrees: chicken, shrimp, filet mignon, lobster and portobello mushroom for $12–$30.