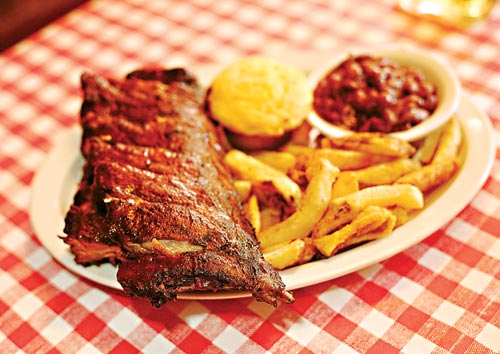 Grab a bunch of napkins. whether you’re after saucy Memphis-style ribs or smoky Texas brisket, here’s where to get the real deal without ever leaving town.

The soft, suggestive aroma of smoke finds your nose on the walk from your car to the doorway, setting off a rolling rumble in your stomach. You’ve come for barbecue, and it won’t be long before you are slurping, smacking and chewing to your heart’s content.

The place is simple: Checkered tablecloths and paper napkins in a metal dispenser lend authenticity, as do the friendly greeting and farm implements on the walls. It’s called a joint, a pit, a shack or just a ‘cue; rarely is a full-blown restaurant an indicator of a pit master’s chops.

Braggadocio is par for the course, with awards on every wall, but talk of what makes the best ‘cue can turn brunch into a brawl sooner than declarations of religion or politics. Rubs versus marinades. Sweet versus sour. Chili peppers versus more chili peppers. Hickory versus oak. Red oak versus white oak, for that matter. It’s obvious there are factions, mostly divided by regional traditions. Cowboys like their beef, natch, and pork ribs belong to soul food like red beans go with rice. The smart eater pleads agnostic and worships opportunistically at every small, sticky house of the holy he or she can find.

Barbecue&emdash;unlike grilling, a fast, high-heat proposition&emdash;is a slow process that uses indirect heat and/or hot smoke. Humans have used smoke to flavor and preserve meat for millennia, and stories flourish as to the origins of both the method and the very word barbecue. Was it from the West Indian barbacÃ²a for cooking over coals or the French barbe Ã  queue, indicating a spit from whiskers to tail? Theories abound, but it’s clear that the U.S. institution of barbecue drew much from the cooking fires of slaves and working poor in the Southern states. The master may have lived high on the hog, but his work force made magic with the tough cuts at hand.

Upscale restaurants may succeed in elevating lowly sweetbreads and pork belly to precious plates of haute cuisine, but barbecue remains a down-home slow food, eaten in good quantity with a deep memory of community around a fire. The fact that barbecue is affordable and travels well makes it especially palatable for catering special events of all stripes. (Most of the places listed below provide off-site catering, hauling their smoker to your place.)

What makes good ‘cue is highly subjective, and we’d be crazy if we dared to rate the bushels of barbecue restaurants in these parts. We’ve got both traditional Texas- and Memphis-style joints, plus plenty of renegades that describe themselves as California style, my style or unique. So jump in and get some sauce on your shirt with the following guide to barbecue in the Greater Sacramento area.

Menus and recipes are the same, but each individually owned location varies in size and ambiance. For example, the Roseville location has an Old West faÃ§ade with a mannequin cowboy stuck in BBQ Jail. No one could tell me his crime, but wouldn’t Mannequin Cowboy be a great name for a band?
Meat: Ribs, beef brisket and exceptionally moist smoked turkey
Sides: Bull’s Eyes (baked sweet-potato chips) and Texas Toothpicks (battered onions and jalapeÃ±o peppers seasoned with cayenne and black pepper)
Good to know: Great country music while you hold for phone orders
Off-site catering: Yes; online order form available
1201 Orlando Ave., Roseville; (916) 721-7427
3977 Durock Road, Suite 205, Shingle Springs; (530) 676-4040; backforty.us

Located in midtown’s gourmet gulch, this place has a cute dine-in area with art on the walls. But the ‘cue is authentically Sweet Georgia Brown.
Meat: Carolina-style pulled pork, superior chicken and ribs served with Sonny’s Bar-B-Q Sauce flown in from Georgia
Sides: Molasses-kissed mix of pinto and black beans, fresh-tasting sweet potatoes
Good to know: Pecan pralines fly out the door faster than they can make them
Off-site catering: Yes
1226 20th St., Sacramento; (916) 441-0622

Eli and Belle Miller have been serving it up D’miller style at this location for a lucky 13 years.
Meat: Pork sandwiches, St. Louis ribs
Sides: Housemade potato salad, coleslaw and baked beans
Good to know: The sauce is boss, says Eli Miller. Once you try it, it’s in your diet, and a little dab will never do you.
Off-site catering: Yes
7305 Fair Oaks Blvd., Carmichael; (916) 974-1881

The House calls its method Southern-style: The meats are marinated, then smoked for 11 hours. The sauce goes on when the customer gives the order.
Meat: Chicken and ribs, of course, but tri-tip is actually its claim to fame
Sides: Sweet-potato fries
Good to know: Discount coupons on website
Off-site catering: Yes
3535 Elverta Road, Suite C, Antelope; (916) 332-7041

Sure, JR’s caters lots of community events, but those who eat in get to play pool and watch the large-screen TV.
Meat: Texas-style brisket, pork shoulder, beef and pork ribs
Sides: Coleslaw is crisp with a sweet dressing
Good to know: In November and December, JR and crew smoke hundreds of turkeys for holiday tables
Off-site catering: Yes
180 Otto Circle, Sacramento; (916) 424-3520; jrtexasbbq.com

Enjoy the peaceful patio out back or the eclectically rustic dcor inside this personable restaurant next to the historic Woodland Opera House.
Meat: Pork spareribs and baby back ribs are dry-rubbed, smoked for six hours, then glazed with sauce
Sides: Hand-cut taters are an order unto themselves, served with barbecue sauce or ranch dressing
Good to know: Free two-hour parking in back; kids eat free on Mondays; live bands Fridays and Saturdays
Off-site catering: Yes
667 Main St., Woodland; (530) 666-4400

The folks at Memphis Bar-B-Q Company tend their two smokers right inside the restaurant, stoking them with hickory wood from Arizona.
Meat: Memphis-style pulled pork, ribs
Sides: Mustard coleslaw that’s hot and sweet
Good to know: We’re not in Memphis anymore, Toto: The slaw is served as a side, since Californians aren’t used to putting it on the bun, says owner/manager Amal Mabham
Off-site catering: Yes
455 Bercut Drive, Sacramento; (916) 441-0603

The long wait in the bar seems to require a round of creamy Gold Cadillac cocktails, but the real treat is the people-watching on Friday and Saturday evenings at this biker bar/local hangout just outside of Placerville.
Meat: Assertively seasoned ribs and chicken smoked Texas-style
Sides: Baked potato and green salad with a slice of pickled beet
Good to know: An extra plate for sharesies will cost you a buck
Off-site catering: No
6221 Pleasant Valley Road, El Dorado; (530) 622-2901

This family-run restaurant does Memphis-style ‘cue with white oak in the smoker. Appetizers, and prices, are on the fancy side.
Meat: Beef and pork ribs, brisket, pulled-pork sandwich
Sides: Collard greens, Velveeta-esque mac ‘n’ cheese, steak fries
Good to know: While the barbecue is traditional American, the family’s Korean heritage is evident in dishes such as sweet glazed beef served with kimchi
Off-site catering: Yes
9657 Folsom Blvd., Sacramento; (916) 361-2014

Kansas City-style: In this barbecue-obsessed town, the meat is dry-rubbed with salt and spices, then smoked over hickory for hours. The sauce is served on the side: Vinegary, spicy and sweet all at once, it’s often thick and dark with the addition of molasses. Local source: ‘taint none. You’ll have to go to Arthur Bryant’s on Brooklyn Avenue in K.C.

Memphis-style: Wet ribs are brushed with sauce before and after smoking; dry ribs are rubbed only with spices and salt before smoking. Pulled- or chopped-pork sandwiches are slathered with sauce and served with coleslaw on generic hamburger rolls. Local source: Everett and Jones

Oklahoma-style: Takes influences from both Texas and Memphis, but has a wider range of proteins in the smoker, including bologna. Local source: none

Texas-style: Meats, particularly beef brisket and ribs, are slow-cooked in a smoker with low heat and heavy smoke. No sauce is used in the cooking, but it may be used to dip the meat into during the meal. A telltale pink ring is an important sign of this slow, dry style, caused by long contact between the myoglobin in the meat and the carbon monoxide in smoke. Local source: Texas West

How to Speak Barbecue Like a Southerner&emdash;I lived in Athens, Ga., for a year when my husband was in grad school at the University of Georgia. We spent our weekends sampling roadside joints all over the countryside. Here’s what I learned from living in the South:
â€¢ Barbecue is used more often as a noun than as a verb.
â€¢ Barbecue means tender, smoked meat, not something with grill marks on it.
â€¢ That thing you cook your hamburgers on is a grill, not a barbecue.
â€¢ Tea is iced and already sweet.
â€¢ Sides are sometimes called vegetables. Mac ‘n’ cheese is a vegetable; Jell-O mold is not. (It’s a salad.)