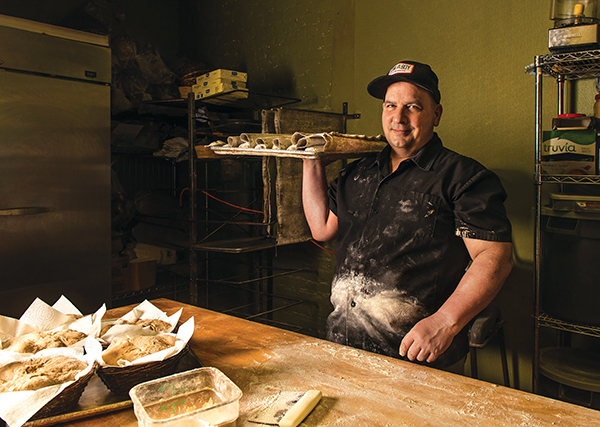 Bread bakers tend to be an obsessive bunch, and Mark Helms is no exception. He personally bakes every loaf of bread served at Juno’s Kitchen, an East Sacramento lunch spot known for its outstanding sandwiches.

The perfectly crusty rounds of sourdough that Helms turns out in his small kitchen are the result of late-night visits to the restaurant to feed the starter so that the dough will be ready for baking the following morning. It’s a job he entrusts to no one but himself.

“Every day of my life is consumed by this,” says Helms, a creature of habit with seemingly little desire to take a vacation. “Trying to hire someone to do this would be really hard. I know that’s how other bakeries do it, but trusting someone to feed that starter at the end of the night, I would be up wondering about it.”

Some days, Helms is on-site from 8 a.m. until 3 the next morning. On other occasions, he will go home for a bit to eat dinner (he and his wife live a short distance from Juno’s), maybe fool around on his drum set (he has played in several bands, from punk to big band), then return at midnight to tend to the starter. “I listen to TED Talks while I’m working,” he says. “I have no problem spending my time that way.”

Helms, who has cooked in some of California’s poshest kitchens, discovered true contentment baking bread. “At one point, I wanted to go up high in the restaurant world, but I grew tired of trying to find that obscure type of produce or cut of meat that customers had never heard of before,” he explains. “Bread is just super interesting to me.”

And, true to his punk rock roots, Helms bakes it his way, with an unabashedly yeasty tang (“The aroma is the most important part for me,” he says) and a crumb that is sturdy enough for his sandwich creations. “You have to do stuff for yourself rather than to impress everybody. I want to be me. I don’t want to sound like somebody else as a musician, and I don’t want to be somebody else’s baker, either.”