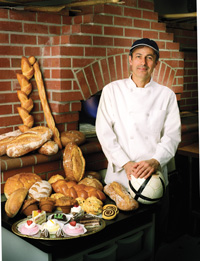 Among all the peculiarities of American culture he encountered, there was one thing Aziz Fattahi couldn’t abide.

It was squarish, preternaturally white, machine-made and so Charmin-squeezable that you could ball it up and bounce it on the floor. It came in plastic bags secured with yellow twist-ties and stamped with words like “Hearth,” “Pride,” “Home” and “Wonder.” It was injected with substances that did indeed make you wonder, with names only a chemistry major could decipher: ethoxylated mono- and diglycerides, calcium and sodium stearoyl lactylates and ammonium sulfate. It was boring, flavorless and, worst of all, ubiquitous.
And they called this bread?

Understandably, Fattahi, who hails from Iran, was disheartened (probably doubly so when he discovered that Americans called Velveeta cheese, too). What would he eat with his feta cheese in the morning? Why could he find nothing resembling his native country’s barbari or sangak, a thin, flat sourdough baked on hot pebbles and eaten just about “any way you can get your hands on it”? Why did Americans have to get their so-called bread from numbered aisles in the same place they bought bananas and toothpaste?

“We didn’t have supermarkets in Iran. I think there were only two when I was growing up in the whole city of Tehran,” says Fattahi, 48, who came to the United States in 1976 to study international agricultural development at the University of California, Davis—and never left.

“In Iran,” he says, “you go to your local store—either your butcher for meat or your bakery for bread. Each bakery makes only one kind of bread. You stand in line and wait for it to come out of the oven. Basically, it’s very fresh and it has a lot of flavor compared to something that is mass-produced and packaged and then sits on the shelf for a couple of days before you eat it. We had sliced bread in Iran, too, but only people with stomach problems or digestion problems would eat that.”

Not one to pine, Fattahi vowed to compensate for this woeful dearth of quality carbs in his adopted homeland: He decided to open a bakery.

Never mind that as the son of an Iranian government worker, Fattahi had missed out on the generational passing of the bread-crafting baton common among the great baking families of Europe and the Middle East, whose recipes are hundreds of years old. Never mind that he hadn’t any formal education in bread making.
It was enough that he knew from his childhood how good bread is supposed to look and taste. He’d even baked a couple of loaves in his lifetime. And he owned an auto shop in Davis, so he was adept at running a business and working with his hands. All of these things, in his mind, qualified him to be a baker.

“I was getting burned out from automotive repair. I started losing interest and I knew it,” Fattahi says. “I always liked the food business for some reason. I think I have a good palate, and I enjoy cooking and serving food to friends. I used to brew my own beer at home. I’m just comfortable in the kitchen. So I knew that I wanted to do another business, and I thought bread making is simple enough that I could probably get it started, and if it grew enough and I could be successful enough at it, it’s something I could pass on to my children.”

While still operating his auto repair shop, Fattahi set about familiarizing himself with bread-making techniques during his off hours.

“I got some books and baked a lot at home for, like, two years,” says the father of three, ages 10, 7 and 1. “There was all this flour all over my kitchen; my wife was happy that I started a bakery, finally. At first, my bread was pretty bad. I didn’t know what I was doing at all. But I was persistent, like I am with everything. I kept going and I was pretty close to making decent bread, and then I took a class and saw it made by professionals. I’m a very visual person, and that was it—after that, I was on my own. I took another class just to reaffirm what I knew and then I said, ‘OK, I’m ready to start.’

“I had the garage at the same time, and I was hoping that would support my (bakery) business and my household in the beginning. It didn’t work out that way. The moment I started the bakery . . . I didn’t have a good manager, and the garage went to hell in a matter of a month. I kept it for a year and finally I just got rid of it, sold the equipment. Luckily, the bakery started showing a profit in the third month, which was amazing.

“I really had to work hard at this business to show some profit and pay my bills. My first year, I was working probably 14 to 19 hours a day, seven days a week for the first six months. It was all a haze; I don’t remember it. I was living on coffee and it was not a healthy time for me. But that’s what it took to make this business successful.”

Ideally situated next to the Davis Transit Depot—Amtrak commuters by the score devour Village Bakery’s cinnamon snails on their way to work—Fattahi’s shop is small but neat, and redolent with the scent of fresh-baked goods just begging to be borne away in bicycle baskets and backpacks (well, this is Davis) and savored at the first opportunity, preferably with a jug of wine and a thou.

Stacked on shelves behind the counter is a tantalizing array of earthy breads—some round, some oblong, some twisted, no two the same—monklike in their coarse and humble demeanor, but somehow transcendent. Pain au levain, baguette, ciabatta, seeded batard, barbari, pugliese, foccacia, challah—bite into any one of these and you are instantly transported back through the ages, bound with all other civilizations for whom bread (real bread, like this) was the staff of life. Chewing artisan bread is a mandibular workout like no other, a satisfying paradox of sturdy, crunchy crust and delicate, lacy interior.

But just what is artisan bread? According to the Bread Bakers Guild of America, it has no exact meaning. “Artisan” does not apply to any one style of bread product or any one method of baking; rather, it has more to do with the individual baker. All traditional breads contain just four ingredients: flour, water, salt and yeast. Distinction, then, is a matter of timing, philosophy and the standards of the baker.

And boy, does Fattahi have standards. Commercial yeast? Perish the thought! For most of his breads, Fattahi uses starter or “sour,” a partial dough that is begun before the bread itself is mixed. Starter contains wild yeast spores—living, breathing organisms that produce carbon dioxide when they eat, forming the characteristic large, uneven holes in the finished product.

“Commercial yeast over the years has been used to make the baking process shorter,” says Fattahi, a watchful, wiry type who never sits still long enough for his bread to go to his waistline. (Playing for the Davis United World Soccer Club doesn’t hurt, either.) “With artisan bread like ours, we’re doing it the way it used to be. It’s a slower process, but it brings out more of the characteristics of the flour and basically gives it a lot more flavor; it allows the production of acids in the process of fermentation.”

Village Bakery’s doughs are mixed, in the dead of night, by machines (“Nobody can do it by hand anymore because it’ll break your back”), shaped by hand, loaded into hearth ovens, packed by hand and delivered to their destinations before most people even hit the snooze button. In February, when he was interviewed, Fattahi was in the process of moving his baking operation to a new 4,500-square-foot facility in Davis, which will enable his crew to increase production (right now they make about 3,000 loaves on a busy night) and deliver the bread fresher.

Artisan bread is at its finest right out of the oven. After the first two hours, it goes south faster than carefully applied lipstick at a cocktail party, but rigor mortis doesn’t set in until about the 48-hour mark. Good bread is never at a loss for aficionados, Atkins diet craze notwithstanding.

“We didn’t see any drop in sales because of [the low-carb craze],” Fattahi says. “I think the reason is, people who are attracted to artisan breads probably watch more what they eat [so they don’t have to diet]. A lot of my customers say they can’t eat other bread anymore.”

Contributing to this snobbery are local restaurants and gourmet shops that buy Village Bakery’s breads. Their customer-satisfaction report: a floury thumbs up.

“Customers really seem to like the dinner bread, the levain,” says Frederick Reyes, executive chef at Zinfandel Grille in Folsom. “We also offer the ciabatta, which is very airy and soft, the baguettes and the olive bread, which is excellent.”

Lori Friedli, grocery merchandiser at the Sacramento Natural Foods Co-op, adds, “Their bread is just amazing. They use good ingredients like organic flour, so the product is clean. And customers love it. Village Bakery is one of our top-selling breads. It’s baked fresh every day, so we are able to provide our customers with fresh-baked artisan bread on a daily basis.”

In the Village Bakery retail shop, loaves are priced from $1.25 to $3.25. Village Bakery also sells 12 varieties of brick-oven, New York-style pizza, whole or by the slice. A favorite among UC Davis college students is the veggie pizza, topped with roasted onions, bell peppers, zucchini and a sprinkling of feta cheese.

“It’s very light on sauce and cheese. We’ll put on more cheese if somebody asks for it, but I think too much cheese and sauce takes away from the flavor of the crust and toppings,” Fattahi says. “Ingredients are the most important thing—what quality you use and how fresh it is. We use a lot more expensive cheese. There are cheaper ones with additives that are probably a lot easier to handle, but I didn’t make money on pizza when I started, so I set out to make something that people would appreciate. That was my philosophy with bread, too. It’s not just about money.

“My growth will probably be in the pizza part of the business. I’ve had a lot of people ask me when am I going to open up a shop in Sacramento. That may be the next thing. There’s always a market for good food.”

By the way, Fattahi won’t be washing down his own pizza with a Budweiser. Give him India Pale Ale or give him death.

“Oh, yeah, I’m picky,” he says with a smile. “Life is too short to settle for mediocre or mundane. You have to get the best of what you can, when you can.”