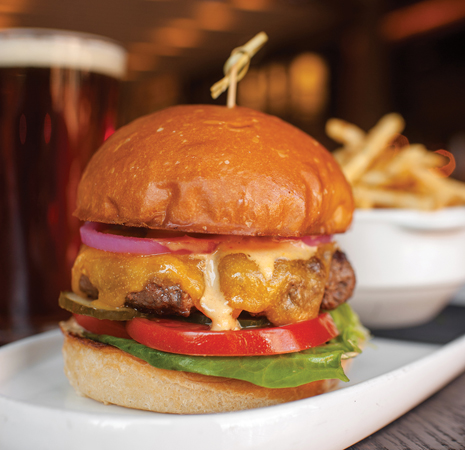 A QUARTER-CENTURY IN BUSINESS is nothing to scoff at these days. With restaurants closing right and left, one that remains open and successful (not to mention relevant) for more than two decades is close to amazing.

This year, 33rd Street Bistro in East Sacramento will mark its 25th anniversary. When brothers Fred and Matt Haines debuted the business in 1995, they faced a very different restaurant environment than today’s. There were far fewer restaurants and much less competition. Fred, who had worked as a chef in Oregon and Washington state, brought with him a distinct Pacific Northwest sensibility—salmon roasted in a wood oven, for instance— that was new to Sacramento.

With Fred in the kitchen and Matt handling the business, the pair went on an amazing run, opening eateries in Davis, El Dorado Hills, Land Park and midtown. Some worked; others worked for a while, then closed. But 33rd Street Bistro is still going strong. The brothers’ most recent venture, Wildwood Kitchen & Bar in the upscale Pavilions shopping center, had a bumpy beginning. Opening in late 2017, it was popular with the well-heeled Sierra Oaks and Arden Arcade crowd. But only a year in, a kitchen fire forced the restaurant to close for six months. The timing was terrible: Bandera had just gone out of business, and its regulars were transferring their loyalty to other restaurants in the area—places like Ruth’s Chris, Cafe Bernardo and Piatti. Wildwood missed out on that opportunity.

Now reopened since November 2018, Wildwood has found its footing. Fortunately, the fire didn’t touch the sleek dining room, which was designed by the highly regarded interior designer Bruce Benning. It still has its original cozy booths and bar-height community tables. The rectangular bar, with its beautiful backlit wall of whiskeys, is still there, as is the glassed-in wine cellar. There’s local art on the walls, and a curtain of braided rope that partially obscures a mirrored wall. A large, modern light fixture that looks like illuminated branches hangs over the space, giving it a sexy glow. One of Wildwood’s biggest draws is the 125-seat patio, a buzzing spot with outdoor sofas, fire pits and live music four days a week.

With three other restaurants to run, Matt and Fred handed over day-to-day operations to chef Victor Cruz and general manager Sikha Das. The menu features Fred’s trademark fusion of New American and global cuisines. There’s naan and ahi poke, pancetta prawns and barbecued salmon salad, rock shrimp risotto and a wood-grilled burger. Wildwood was the first restaurant in Sacramento to serve the Impossible Burger, a plant-based burger substitute that took the world by storm. (Even Burger King sells them now.) The kitchen also serves cavatappi pasta with Impossible Bolognese sauce.

Matt, now 57, and Fred, 62, have ridden a restaurant roller coaster over the past 25 years. Yelp and social media changed the game. Now, everyone’s a restaurant critic. A rising minimum wage has also been a challenge. Yet they’re still here. “I used to hope we’d still be around in 20 years,” says Fred. “There are a lot of ups and downs in life and in business.” One thing that hasn’t changed, says Matt: “We’re still brothers.”