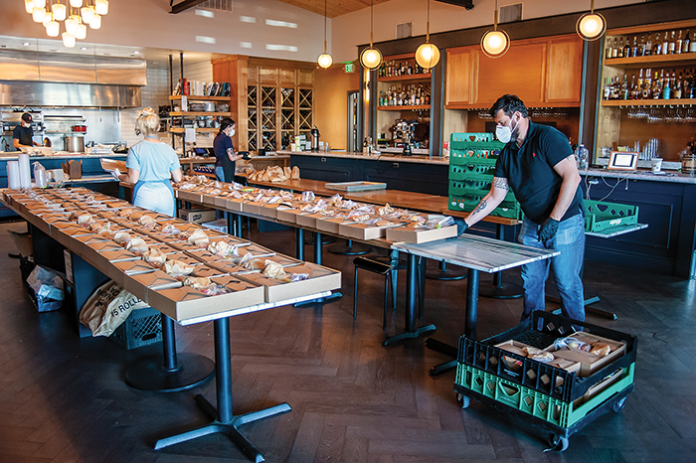 It’s 10 o’clock on a Tuesday morning, and Canon restaurant in East Sacramento is bustling with workers. But they’re not setting the tables with gleaming silverware or prepping the high-concept food that earned the restaurant a Michelin Bib Gourmand award last year. Instead, they’re loading cartons of potato salad, baked beans, grilled chicken and freshly baked bread into boxes for delivery to economically fragile residents of low-income housing. This is what a restaurant looks like in the pandemic era.

After COVID-19 shut down dine-in service in the spring, Canon turned to a philanthropic model to help keep its doors open, pay its employees and feed people—the kind who normally wouldn’t be able to eat at Canon, where dinner and cocktails for two, pre-pandemic, could easily run $100 or more. In mid-March, Canon owners Brad Cecchi and Clay Nutting teamed up with Patrick Mulvaney of Mulvaney’s B&L to start Family Meal Sacramento, a seat-of-the-pants operation in which a handful of restaurants made and distributed meal boxes to local schools and community centers. Each acted autonomously as a micro commissary, creating its own menu and preparing its own food. Money to operate the program came from crowdfunding and corporate matches.

Soon, the city stepped in with funding, and within six weeks, Family Meal served about 100,000 meals. After dropping by Mulvaney’s for a tour and a photo op, Gov. Gavin Newsom announced plans to create a statewide program based on Family Meal that would pay restaurants to feed senior citizens three nutritious meals a day, a coronavirus version of Meals on Wheels.

The program, called Great Plates Delivered, kicked off in Sacramento in early May with 30 local restaurants. Each restaurant receives $60 to prepare a day’s worth of meals—breakfast, lunch and dinner—for one person. At full participation, a restaurant can make up to $3,000 per day—money that goes toward ingredients, salaries, rent and overhead. Funding comes from FEMA, the Federal Emergency Management Agency.

You can trace Great Plates’ DNA to the wildly successful nonprofit World Central Kitchen, founded by celebrity D.C. chef José Andrés to feed Haitian residents after the devastating 2010 earthquake. In the years since, WCK has fed millions of people: in Puerto Rico after Hurricane Maria, in California during the wildfires, in D.C. when the government shut down in 2018. Andrés has become the patron saint of food relief work, and in 2018 he was nominated for a Nobel Peace Prize. “He’s definitely the model when it comes to this kind of feeding,” Cecchi says. “Without World Central Kitchen, we wouldn’t have been able to bring our model to the city or the state and say, “Hey, look at this. It works.’”

As paid mentor chefs for Great Plates, Cecchi and Mulvaney have held Zoom meetings and phone calls with restaurateurs all over the state, explaining how to pivot from a traditional restaurant operation to producing delivery meal boxes. The program—the nation’s first of its kind—targets multiple beneficiaries. Seniors, who are especially vulnerable to COVID-19, get healthful meals without leaving their homes. Restaurant employees get a paycheck. Landlords receive rent. Local farmers sell their crops. And restaurateurs end up with enough operating capital to keep the ball rolling until dine-in service resumes at full force and the restaurant industry returns to normal.

That is, if it returns to normal. Some industry experts believe as many as 75 percent of restaurants nationally may close permanently as a result of the pandemic. Cecchi doesn’t know how it will all shake out, for him or his industry colleagues. “Restaurants will have to adapt,” he says. “Curbside and to-go business is here to stay, at least for the foreseeable future. People are still going to need to eat. Whether they want to go out to eat, that’s to be seen.” Which means programs like Family Meal Sacramento and Great Plates Delivered could play a key role in saving restaurants for all of us.