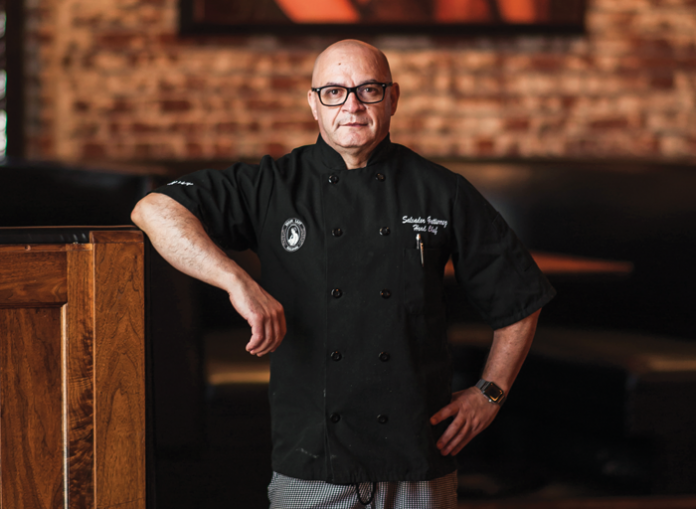 How Sal Gutierrez discovered that his place is in the kitchen.

You’ve gotta start somewhere. So says chef Sal Gutierrez, whose career can be traced to a humble dishwashing position at Carrows Restaurant in 1997. He had recently relocated to the United States from Mexico City, where he’d lived with his parents and 23 siblings and cooked from an early age.

“I was 11 or 12 when I started taking care of my little brothers, cooking for them,” recalls Gutierrez. “I would make little appetizers, soups, tomato salads, things they could eat fast. And every day I would tell them that if they eat their course they can eat dessert, so I would always have some sort of little sweet for them.”

The dishwasher job lasted just four days: When one of the line cooks quit unexpectedly, Gutierrez was assigned to replace him. It was baptism by fire, literally. “The first day cooking, the general manager says to me, ‘Tomorrow, you open by yourself.’ But I wasn’t afraid. When you are used to living in Mexico City, anywhere is easy for you.”

After several years of cooking basic diner food, Gutierrez yearned to develop his own recipes, but he had little platform for experimentation aside from doctoring prepackaged Alfredo sauce. He seasoned food intuitively, the way his mother had. “She never measured anything,” Gutierrez says.

Although Carrows didn’t exactly expand his culinary repertoire, it did teach him to cook with speed and efficiency, skills that served him well when he was later hired at 33rd Street Bistro and Riverside Clubhouse. “They wanted to know, ‘Can you prep? Can you run a sauté station?’ I knew I could.” Later, his friend Fidel Lopez, now chef de cuisine at Centro, helped Gutierrez secure a position at Cafe Bernardo. There, he met Jason Boggs, who was sous chef at the time.

“From Jason, I really learned hard work. When you’re sous chef, it’s like you’re everybody’s bitch, you know? So I worked fast, trying to get everything that everybody wanted,” says Gutierrez. In turn, he taught Boggs some of the time-saving tricks he’d perfected at Carrows.

Boggs, who co-owns Shady Lady Saloon, eventually tapped Gutierrez to serve as executive chef there. After two decades playing supporting roles, he was finally in charge. Gutierrez revamped the brunch menu as a way of proving himself. “I knew I needed a menu that appealed to regular customers, hung-over people and kids, so that’s what I came up with.” His signature chilaquiles are a particular source of pride, as is his handmade ranchero salsa. “It’s made with five different chilies, some roasted, some boiled, some raw, and it takes five days to make.”

All these years later, Gutierrez is gratified to be running his own kitchen at last. “I waited so long to do my own thing,” says Gutierrez. “Every time I see the customers leaving, it’s with a smile on their faces, and that makes me proud of my food.”