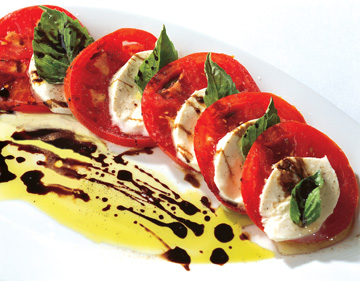 What’s the correct temperature to store wine? Clearly, there’s some debate&emdash;evidenced by the fact that two Sacramento restaurants named in honor of that temperature have, er, different names. There’s Restaurant 55 Degrees on Capitol Mall. And now, located in the culinary heart of midtown, there’s 58 Degrees & Holding Co., which shares a ZIP code with the likes of ZÃ³calo, The Waterboy, Dragonfly and Aioli.

58 Degrees is not just a restaurant; it’s also a wine store and wine-storage facility, offering temperature-controlled lockers for rent. An intimate, dimly lit wine bar is adjacent to the well-appointed retail space, and showcases a surprising array of wines by the glass&emdash;58, to be exact. Chef David Feldman has devised an abbreviated menu of mostly small plates, designed to complement and enhance a diner’s wine experience. It would be easy to assume, with the heavy emphasis on wine at 58 Degrees, that food might get lost in the shuffle, but that’s not the case. Everything is beautifully and thoughtfully presented, and the freshness of ingredients is evident. And while the kitchen still has some kinks to work out, it’s clear staffers are paying attention to detail and taking pride in their craft.

The menu is divided into small plates and salads, panini and signature dishes. Portions, for the most part, are tidy and neat, encouraging diners to try several dishes while sipping wine. However, if noshing is not your style, the signature dishes such as the herb-marinated chicken breast with a goat cheese potato gratin ($14) are entre-sized.

The kitchen’s charcuterie plate&emdash;whisper-thin slices of fat-speckled salami and rosy-tinted lomo (dry-cured pork loin) garnished with feathery shards of Parmesan cheese&emdash;is the perfect accompaniment to one of the cafe’s pink wines, such as the lovely Kosta Browne Pinot Noir Ros. I also enjoyed the artisanal cheese plate, which included a hunk of Shaft’s blue cheese, a soft, nutty Queso de Cabra and a Marin County triple-cream brie. The cheeses were served with a pile of toasted, salty nuts and a marvelous, richly flavored dried-fruit compote.

I was a bit baffled by the country pÃ¢t, whose ultra-smooth texture and subtle taste lacked a resemblance to the nubbly composition and robust flavors of traditional country pÃ¢ts. But the dish is worth ordering simply for its accompanying apricot fig chutney, a sweet/tart mixture of sticky, glorious, sunshiny flavors. Sadly, the dish was served with insipid toasted bread that looked suspiciously like the bread I use for my kids’ peanut butter and jelly sandwiches. I found that strange, as other dishes came with sliced baguette rounds that would have made a more appropriate partner for the pÃ¢t.

The arresting ahi tartare was composed of tiny, dusky-pink dices of fish packed together into a perfect, squat cylinder, then topped with a creamy avocado relish and a crisp thatch of daikon sprouts. The ahi, unfortunately, was extremely salty, detracting from the fish’s silky texture and what should have been its robust, clean flavor. Another small plate, the trio of bruschetta, was an entertaining dish: From a list of six toppings, you choose three. The spicy, tangy olive tapenade that blanketed one of the bruschetta toasts was gentled by a smear of creamy fromage blanc (similar to cream cheese), while the rustic artichoke pesto topping added a garlicky punch.

My foray into larger plates was mostly successful. Chef Feldman’s excellent spring vegetable risotto was dotted with corn kernels and haricots verts and flanked by a sweet tangle of deep-fried grated carrot. Its fresh, liltingly clean flavor shone with a glass of the bar’s crisp, complex Core White Blend 613. On another visit, an exquisitely cooked New York strip steak was drizzled with an intense, buttery red-wine reduction and surrounded by a ruffled forest of perfectly dressed oak leaf lettuce. The grilled steak panini, however, ordered medium-rare, came out so rare that there was some speculation at the table as to whether parts of it actually had been cooked. I sent it back, only to have the overly salty meat strips returned so leathery and well-done that, after several minutes of futile chewing, I finally gave up.

The desserts were somewhat disappointing: A warm chocolate lava cake was overbaked and dry, and the lemon tart (since removed from the menu), though pleasantly flavored, had an underbaked, doughy crust. I recommend the creamy, satisfying gelato trio, which includes a terrific espresso-flavored selection.

58 Degrees’ very international wine list is broken down into easy-to-understand categories, from bubbles & sparkles and bright fruit & light bodied to bold & spicy. And while some wine-knowledgeable patrons may find the list patronizing (I hate when they put wine menus together like that, sniffed a friend who works in the industry), I applaud the attempt to make wine friendly and accessible. You can order a 3-ounce taste, a 6-ounce glass or a bottle, and servers do their best to guide you.

The wine cafe is narrow and small, with a lengthy, interesting crushed-glass bar. Beautiful old brick walls add character, while the pitted concrete floors and pea-green back wall snaked with shiny HVAC tubes contribute a gritty, modern edge. There are no traditional dining tables, just bar tables and a snug lounge with sofas and chairs. The ambiance is loud and festive, not conducive to romantic, private dining&emdash;but it is unabashedly fun.

What Makes It Special The dizzying lineup of wines by the glass and the wine bar’s eclectic, upbeat crowd.
What To Order The artisanal cheese plate&emdash;ask for extra dried-fruit compote.
When To Go If you want to dine at a table, not the bar, get there before 6 p.m.