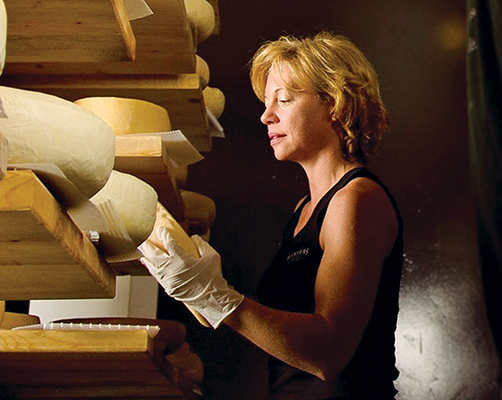 When did your love of cheese begin?
I lived in New Zealand and Australia before moving to the Brie region of France when I was 22. That’s where I fell in love with eating cheese. I wouldn’t be the person I am today if I hadn’t lived in France for nearly 15 years and seen the incredible amount of cheese that is made there and how important it is to the culture. Before that, it was Kraft cheddar for me. The hardest thing about leaving France was leaving the cheese.

Did you think then that you wanted to be a cheesemaker?
At that point, I still didn’t know I could make cheese. It just became an interest of mine to learn everything I could about it. I was a flight attendant for United based in Paris. In the golden era of the ‘friendly skies,’ I worked first class and would learn about all these amazing cheeses while working the cheese cart back when it was silver service. And because cheese is relatively cheap in France, even as a pretty poor flight attendant I could have 20 cheeses in my fridge and it wouldn’t break my bank.

Is there a cheese from France that you miss?
We’re really lucky that we get a lot of really good cheese in the United States now, especially in the last 15 years. The one thing that I really miss, though, is the fresh French goat cheeses. They’re made with raw milk and are soft with a bloomy, brie-like rind. The minute my husband and I get off the plane in France, we run to a market to buy some watercress and some of that cheese and a baguette and some lardons and make a sort of sandwich out of it. That is our most favorite meal in the whole world.

How have you put your stamp on the cheeses at Winters Cheese Co.?
They have given me amazing leeway to be creative and do what I would like. They let me do any kind of rind I like on the cheeses. I think I have a sort of French flair that I bring to things.

Where do you find inspiration for your cheesemaking?
Having been a flight attendant, I’ve still got wings, if you will, and I’ve used cheese as my launchpad for travel. My favorite trip so far was to Italy. I went to five different creameries in Tuscany. I got to know all of the cheesemakers. It was one of the most inspiring trips I ever did. I learned so much from them. They are so old world and are such intuitive cheesemakers. They do everything that we’re taught not to do in the United States.