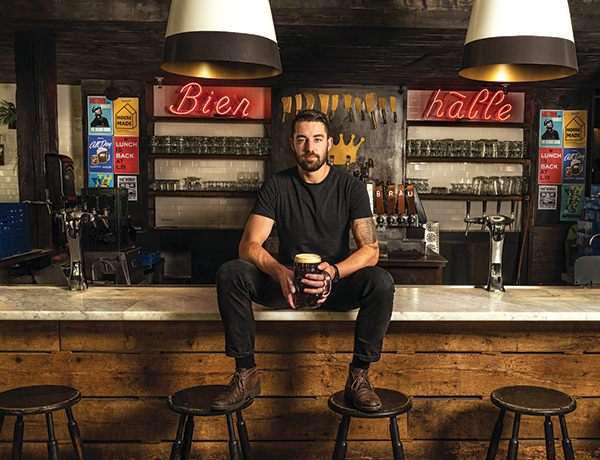 Day job: General manager and ale curator at LowBrau Bierhalle
Age: 26
Claim to fame: At age 22 ½, Dierdorff was one of the youngest people to become a certified cicerone, the beer equivalent of a sommelier. He is currently studying for the Advanced Cicerone Certification.

When was your interest in beer born?
It all started in San Diego, where I was born and raised. I was 21 years old and attending a business program at San Diego State University while working at a job where I had to learn about the beers I was serving. I became super interested in knowing about the process of brewing and how sophisticated it was. So I signed up for the Business of Craft Beer certification program at SDSU. The purpose of it is to prepare for the cicerone exam. When I found that out, I became even more interested and was determined to become a cicerone. It all took off from there.

How would you rate Sacramento’s beer scene?
I think Sacramento is up-and-coming in multiple areas, not just beer. I keep telling people that I think Sacramento is about five years behind San Diego, which is a good thing. In the coming years, Sacramento is going to be a spot that is booming and flourishing, not only its brewery scene but restaurants, hospitality, the cultural scene, everything.

So you don’t see any risk of the market becoming oversaturated?
Not at all. Anybody who says that hasn’t been to Los Angeles or San Diego or New York or Chicago. Those scenes are still flourishing. Breweries are still popping up everywhere. We have a soccer stadium coming in the next few years, which will provide a big landscape for the food and beverage industry to grow.

Where do you see yourself in that future?
I would love to own my own business in the beer and food industry one day. I already have my plan all figured out. I would love for it to be here in Sacramento if the time is right and the opportunity presents itself.

What are some of your favorite local breweries?
I think we have a great brewing company scene here in Sacramento. There are a ton of people still learning and growing. Some of my favorite breweries are Urban Roots and Big Stump in Sacramento, Moksa in Rocklin, Moonraker in Auburn, Bike Dog in West Sacramento and Knee Deep in Auburn.

What’s your favorite beer style?
If I had to pick a desert island beer, it would be a saison. It’s a great daytime beer. It goes well with so many foods. It’s a Belgian-style ale, which means it has a ton of history behind it. And they’re delicious, with tons of flavor and yeast as a focal point.

On the road to becoming a cicerone, did you discover any styles of beer you just plain didn’t like?
Before I started studying for the program, there were definitely styles I stayed away from, particularly red ales and blonde ales. But as you develop your knowledge of these beers and how they’re made and the history behind them, you really grow to appreciate them all in their own way.