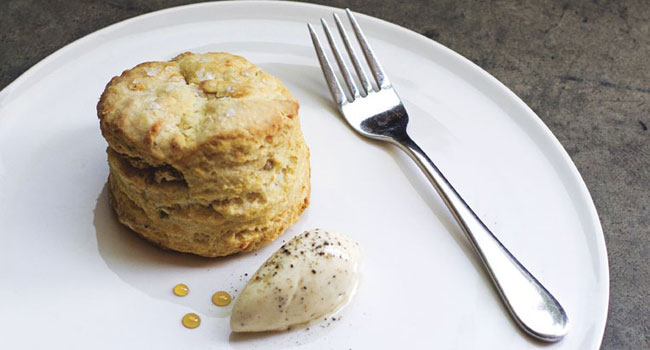 With all the restaurants and bars opening Sacramento these days, how does a new place stand out from the pack? The folks behind Saddle Rock think they have the answer: While farm-to-fork restaurants are a dime a dozen, they’re betting that local diners will be intrigued by food inspired by Sacramento’s gold rush era.

It’s an unusual concept, to say the least. Owned by Broderick Roadhouse’s Chris Jarosz, Saddle Rock is an homage to Sacramento’s first restaurant. Located on 2nd Street in Old Sac, the original Saddle Rock opened soon after the 49ers arrived, using Sacramento as a pit stop on their way to and from the gold fields. With a saloon in front and a dining hall in back, it was a place where lucky miners went to spend their gold. It had a colorful history of murders, floods and fires; once, one of its owners tried to sell his wife for $40 to pay off a debt. This Saddle Rock is on L Street in midtown, in the sleek space that once housed Capital Dime and L Wine Lounge. Heading up the kitchen: Matt Masera, a talented 31-year-old who worked at Tyler Florence’s Wayfare Tavern in San Francisco before moving to Mother and, later, Empress Tavern.

At vegetarian Mother, he worked under Michael Thiemann, first as pastry chef and later as co-executive chef at both Mother and meat-centric Empress. It was like a master class in cheffing: At Mother, he was often tasked to come up with the Chef’s 10 fixed-price menu, a nightly offering of 10 unique dishes that he says pushed him to his creative limits. But he yearned to run his own show, so earlier this year he left Thiemann’s employ without a plan. Meanwhile, Jarosz found himself without an executive chef for Saddle Rock when Kevin O’Connor left the project. Masera was getting job feelers both here and in the Bay Area, but he liked the idea of a history-focused restaurant. “I thought it would be an interesting way to look at food in a different light,” he says. Plus, “I’m a history nerd.”

After signing on with Saddle Rock, Masera plunged into research, reading books on the gold rush and talking with local food historian Maryellen Burns. He learned that bacon, eggs and oysters were the luxury products of their day. Saddle Rock was known for its oyster bread: a hollowed-out Pullman loaf, filled with oyster stew. According to Masera, the restaurant was the original Postmates food messenger service, delivering oyster bread to travelers boarding the train for San Francisco. Masera put together a menu that tips its hat to Sacramento history. Starters are categorized as “snacks, salads and hardtack”—hardtack being the rock-hard, saltless biscuits that served as provisions for miners when they traveled by ship to California. His tasty version of hardtack is Chicken Skin N Biscuit, a flaky biscuit with crispy chicken skin baked into its layers. He serves it with butter flavored with syrup extracted from pine cones—a spread designed to evoke the fragrant foothills pine trees. For his ode to Saddle Rock’s famed oyster bread, Masera created popovers filled with chopped oysters and served with dill butter. Flapjacks, another staple of 49er cuisine, got a Maserian makeover. One iteration is made with sunflower sprouts, seeds and browned butter.

Entrees have strong historical precedents. Masera’s Sacramento cioppino is a localized take on the fish stew that originated in San Francisco. This one takes advantage of Sacramento’s amazing bounty of tomatoes and river fish, with an heirloom tomato broth and an assortment of local fish, including sturgeon, crayfish and catfish. Masera’s take on Hangtown Fry—the bacon-and-oyster omelet that originated in Placerville during the Gold Rush—gets a modern infusion of goat cheese. And in a nod to the Chinese immigrants who built the railroad, there’s chop suey, updated for the 21st century with soba noodles, a tangle of stir-fried vegetables and a spicy ginger-soy-mirin sauce created by sous chef Noah Mansfield. The desserts are sophisticated. There’s Bay Chocolate, a deconstructed cake with devil’s food, cremeux, sable cookie and shaved chocolate topped with fresh sorrel. (It looks like a pile of dirt.) There’s Peach Duff, a steamed cake made with fresh and dehydrated peaches and peach compote. And then there’s something simple: Masera’s browned butter and sea salt cookies.

Masera aimed to make historic food using modern techniques. “We’re doing something very special and different,” he says. “You have to cook for a sense of place. I think we’ve found that.”