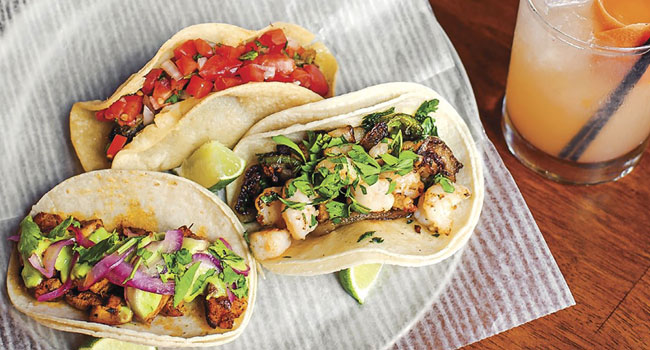 There was plenty of buzz surrounding the May opening of La Venadita, the colorful Oak Park taqueria owned by Tom Schnetz and his brother, David. Schnetz had already launched a handful of restaurants in Oakland and Berkeley—among them Doña Tomas, Flora, Xolo and Tacubaya. Now Sacramento was getting in on the action.

La Venadita’s concise menu, which Schnetz describes as “a coming together” of dishes from his other Mexican eateries, includes inventive street tacos, a brightly flavored ceviche and an enchilada with rich mole sauce. Unlike most taquerias, La Venadita boasts a full bar and an enticing menu of craft cocktails. Word to the wise: Start your evening off right by ordering the spicy Paloma (made with Cimarron tequila, elderflower, grapefruit and lemon juices and a chile tincture).

Schnetz designed the restaurant’s interior (including a vivid pink wall), although much of the place’s character comes from the building itself, a classic brick structure with expansive windows and high ceilings. The patio, with its oilcloth-covered tables, is an ideal spot for whiling away an afternoon sipping Track 7’s Panic IPA and noshing on fresh chips and guacamole.

La Venadita marks a return to Sacramento for Schnetz, who grew up in Land Park. He says Oak Park was a natural fit for his new venture. “The thing that drew me back to the neighborhood is that it feels like Oakland, where I’ve been half my life now,” he says.

The path to opening the restaurant did have some bumps, however. For starters, some diners didn’t find what they were looking for on the menu. “People have their idea of what a taqueria should be,” says Schnetz. “I don’t necessarily meet those expectations, so you’ll always get some pushback. But I try to stay true to what I want and I do try to accommodate people.”

The Schnetz brothers got slammed early on by a few detractors concerned about gentrification of the neighborhood. “I think a lot of what’s happened is that the press was mostly about me, this guy coming from Oakland,” says Tom. “Maybe people felt like I was intruding, that I had no business being there. They didn’t know about my brother, who’s been in Sacramento all his life, or that I grew up here.”

The criticism seems to have subsided. “As we opened our doors and people could talk to us and see what this means to us, I think that’s made a huge difference,” Schnetz says. “We’ve gotten so much positive feedback from people, and that’s kind of why you do it.”

The feedback has been so positive, in fact, that the brothers intend to open a second restaurant together in Oak Park, this time with a German-inspired menu a la Sam’s Hof Brau, a Sacramento institution that Schnetz speaks of with fondness. Stay tuned for an opening in early 2017.