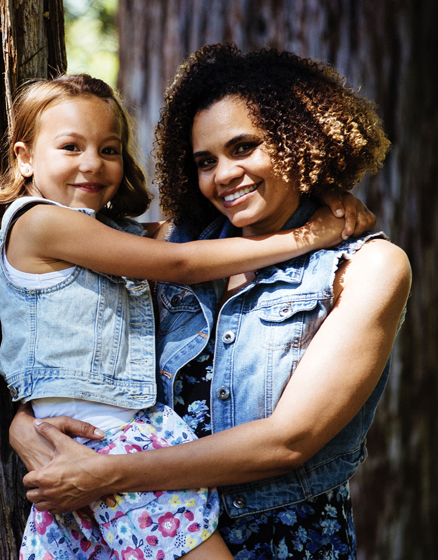 When Rayne McKenzie found herself unexpectedly pregnant in 2011, she knew circumstances weren’t perfect, but she hoped to make the best of things. At the age of 39, she hadn’t been planning on having any children—something she had in common with her then-boyfriend. She had recently gone back to school to obtain her paralegal certificate at American River College and was finally on the other side of her struggles with a bipolar disorder diagnosis from years earlier. Without any family in town, she knew caring for a baby would be challenging, but she charged ahead, determined to do her best.

While she was in the hospital following the birth of her daughter, Lyric, she was referred to the Sacramento Nurse-Family Partnership, a nonprofit program that provides regular home visits to first-time mothers to assist with their transition to motherhood. During one of her visits, the nurse who was working with McKenzie gave her a business card for the Sacramento Crisis Nursery run by Sacramento Children’s Home. “Thanks but no thanks,” McKenzie said, rebuffing her nurse’s suggestion to contact the crisis nursery should she find herself needing a break.

“I absolutely had preconceived negative ideas” about utilizing a crisis nursery, she says. “I thought at the very least it would be admitting defeat at motherhood or, at most, that I might be reported to CPS for being a bad or neglectful mother. I was very scared because I just had no point of reference for what to expect, nor did I know anyone who had used their services.” She tossed the card aside and didn’t think about it again.

Lyric was a colicky baby, though, and McKenzie was on her own during those first months. McKenzie and the baby’s father had taken a break from their relationship while he worked through the grief of having recently lost his mother, only to be laid off from his job not long after. “It was just a really hard time for both of us,” McKenzie says of those first few months.

Things seemed to hit rock bottom one night when Lyric cried inconsolably for hours. McKenzie paced the courtyard of her apartment complex and bounced the baby on her hip, exhausted and desperate. Hearing the baby’s wails, a neighbor came out to check on them. As it turns out, the neighbor was a former crisis nursery volunteer, having chosen to help new moms following her own struggle with postpartum depression. When she heard McKenzie’s story and saw the exhaustion on her face, she suggested contacting the crisis nursery to get some help. McKenzie remembered receiving the business card from her nurse and immediately retrieved it from a neglected pile of papers in her apartment. “I didn’t even call ahead,” she recalls with a chuckle. “I drove straight to the address on the card and just showed up on the doorstep with my screaming baby. Desperation brought me to the front steps of the Sacramento South nursery, but that decision ended up saving and changing my life.”

McKenzie was relieved to be welcomed with open arms that night. “Within minutes of my arrival, they reassured me that my daughter and I were in a safe place and commended me for being such a responsible mother in reaching out for help,” she remembers of her initial introduction to the crisis nursery. “Those words soothed my aching soul! And then when I saw how lovingly they attended to my baby, I knew she would be in good hands. They also provided resources to make sure I was taking care of myself so I, in turn, could be a better mother to my child.”

Lyric was just shy of 2 months old at the time, and McKenzie went back home and slept for close to 48 hours. When she woke, she felt like she was “starting to come back to life again” for the first time since giving birth.

While Lyric remained at the crisis nursery for three or four days, the nursery workers encouraged McKenzie to come in and visit during that time. She confessed that she wasn’t feeling the overwhelming love and connection she saw in moms on TV, who seemed to be so enamored with their babies, and the staff assured her that her feelings were normal. “They encouraged me to go through the motions, to play with her and sing to her. They told me that’s all she would remember, that she wouldn’t know exactly what was going on in my heart. I finally felt like I wasn’t alone. They were rooting for me.”

Over the next two years, McKenzie utilized the crisis nursery once a month or every other month when she needed extra help. When Lyric was still an infant, McKenzie suffered a serious relapse in her mental health, for example, and relied on help from the crisis nursery while she sought medical attention and adjusted to new medications. She and Lyric’s father began to work out their relationship, with the nursery staff encouraging both parents to come in and visit, as well as attend parenting classes offered through Birth and Beyond, another nonprofit in town. McKenzie also relied on the crisis nursery when her father fell seriously ill and she had to travel to the Bay Area to care for him for a few days.

“It wasn’t until Lyric was 1 or 2 that I really started to feel confident as a mom,” she says. “The crisis nursery was really involved in that whole process. They were there for our entire family, and they continually asked me what I was doing to take care of myself.”

Any guilt she felt about leaving her daughter with other caregivers was always assuaged by the fact that Lyric seemed to love the time she spent there. “As moms, we’re always feeling like we’re not doing enough,” she says, “but Lyric was always talking about the projects they’d do there and the fun she had. They have really low turnover, so she was seeing familiar faces. It was really such a positive place for her during a difficult time in my life.”

Today, Lyric is a vibrant kindergartner who has fond memories of the time she spent at the crisis nursery. McKenzie graduated from American River College with honors, and Lyric’s father works as a county probation officer. McKenzie gushes that “he is the most loving, doting father,” and the two are discussing the possibility of a summer wedding.

Perhaps nothing underscores just how far McKenzie has come since that night she showed up on the crisis nursery doorstep like the fact that she now serves on the board for Sacramento Children’s Home. She proudly serves on the philanthropy and quality improvement committees, as well as on a subcommittee focused on crisis-nursery sustainability—a cause close to her heart. “When the CEO (of Sacramento Children’s Home) approached me about joining the board, I was blown away,” she

says. “I didn’t feel like I had anything to offer. He assured me that my story mattered and that I was in a unique position to help others because of it.”

“Rayne has had a tremendous growth in self-confidence since she used the crisis nurseries,” says Roy Alexander, CEO of Sacramento Children’s Home. “Her ability to tackle obstacles and remain positive as she works to achieve successful outcomes is inspiring. Rayne often talks about how it ‘takes a village’ to raise a family, and Rayne is an integral part of our village.” Sacramento Children’s Home celebrates its 150th anniversary this year, and McKenzie’s is just one success story of thousands the organization has seen throughout the years. Since it was founded in 1867 as an orphanage, SCH has served more than 6,900 children and 4,600 families through a comprehensive spectrum of residential, community-based, mental health and educational programs.

Last year, the crisis nursery alone cared for more than 650 children like Lyric, whose parents likely had nowhere else to turn. The ultimate goal of the crisis nursery program is to keep families together and reduce the number of young children who enter the foster-care system. The program provides a safe and supportive environment, crisis-intervention services and case-management support for the entire family. The nursery staff encourages family engagement and involves caregivers in the problem-solving process. McKenzie credits the support she received during her use of crisis-nursery services with much more than just getting a much-needed break. “A lot of the healing we needed in our relationship began with the support of the crisis nursery,” she says of how she and Lyric’s father were ultimately able to come together as a family. Approximately 60 percent of the families that use SCH’s crisis nurseries use the organization’s family resource centers as a parallel service, and many receive direct referrals to mental health and other resource agencies.

As McKenzie learned firsthand, Sacramento Children’s Home operates the county’s only crisis-nursery program. The two crisis nurseries, located in south and north Sacramento, provide family-strengthening programs where caregivers can bring children newborn through age 5 for emergency child care or overnight care during stressful or difficult times for up to 30 days at a time if necessary. The program provides voluntary, confidential and free emergency child care 24 hours a day, 365 days a year.

“They say it takes a village to raise a child, and it certainly does,” says McKenzie. “Not everyone has family support or available friends, so the crisis nursery was my village. It changed my life in that they allowed me to focus on self-care. They gave me hope and helped me find my confidence in being a mother. My newfound self-esteem also motivated me to continue and graduate college by the time Lyric was 2. That’s something I doubt I could have achieved without their encouragement and support.” McKenzie hopes her role on SCH’s board of directors and her continued involvement with the crisis nursery in particular will help other mothers who find themselves alone and overwhelmed. “I was so inspired by the help I received that I made it a point

to give back by contributing items I could and to tell every new mom I met about the wonderful support provided if they ever had the need,” she says. “Now, whenever Lyric has outgrown a toy or an article of clothing, she knows we can set it aside and take into the nursery so another little girl who needs it can have it. ‘Let’s take it to the nursery!’ she says!”

“I don’t think I would have made it if not for the crisis nursery,” says McKenzie. “When I found out I was pregnant, part of me just wanted to give up on my relationship and drop out of school. If you would have told me then that this is how my life would look six years later, I never would have believed you in a million years. They gave me the support I needed to turn motherhood into my motivating force instead of an obstacle to success.”