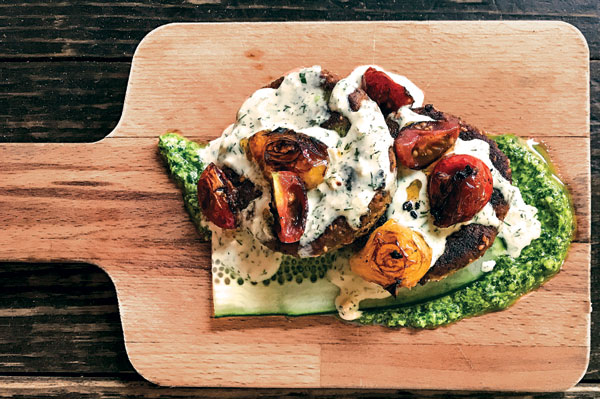 It wasn’t all that long ago that the only places diners could enjoy a full-fledged vegan menu were at some offbeat cafe or maybe a college coffeehouse. Oh, how times have changed. These days, vegan options are popping up at mainstream restaurants where carnivores and vegans alike can dine in delicious harmony.

At Federalist, a pizza, beer and bocce joint in midtown, owners Marvin and Bridgette Maldonado were inspired to create a vegan menu in part because Bridgette discovered that she is lactose intolerant. “When my wife couldn’t eat in our own restaurant, we had to reassess what we were doing and come up with something that we thought was not just good for being vegan but just flat-out good,” says Maldonado.

The vegan menu has been a hit with customers across the board, says Maldonado. “We have definitely seen a large segment of diners who either are vegan or are ordering off the vegan menu or subbing vegan options to create healthier meals.”

At Hook & Ladder, chef Anthony Scuderi is inspired by the opportunity to prepare vegan options for diners. “When you’re forced to take out some of those easy go-tos like cheese and butter and cream, you really have to push the boundaries of how you cook,” says Scuderi. “It’s something that helps push our creativity.”

Whereas vegans are still an afterthought at many restaurants, with chefs throwing together whatever veggies might be in the walk-in, “we are more planned out and methodical in our approach to thinking about how can we give someone a great full meal,” explains Scuderi.

Hook & Ladder’s vegan menu includes regular menu items that have been modified to accommodate vegans as well as inventive dishes like their take on a classic piccata, in this instance made with grilled treviso (a milder type of radicchio) in place of chicken, and a chickpea fritter accompanied by an Italian-style salsa verde.

“It’s really cool that the vegan push is getting into mainstream restaurants and into the hands of professional chefs,” says Scuderi, who established his vegetarian credentials as a chef at Mother. “You’re getting food prepared by pros who are developing dishes with flavor and complexity. I think people are really yearning for that.”