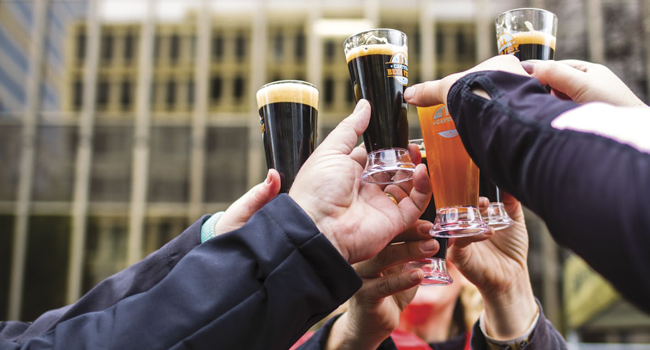 On the surface, a beer festival seems like an ideal place for craft beer rookies to get up to speed in a single afternoon. After all, even the most mediocre beer festivals generally offer dozens of breweries pouring small samples of flagship brews and occasional rarities. It’s a great way to try new beers and new breweries. But the festival experience also presents a number of pitfalls.

As a seasoned beer festivalgoer, I’ve learned to navigate these pitfalls, and I can move through lines with a terse efficiency that would wow the Soup Nazi from “Seinfeld.” For any craft beer beginners ready to separate themselves from the herd, I’ve assembled this list of ways that you can attend a beer festival like a beer geek.

SPLURGE FOR THE VIP PASSES.

Beer geeks don’t go to a beer festival to get hammered on Trumer Pils with their college buddies; they go because they want to try new and rare beers. To that end, the VIP pass is almost always a necessity, leaving you with shorter lines, occasional special pours and a more intimate festival experience. Remember: The binge-drink rowdies aren’t going to pay for a VIP experience. They’re going to get loaded in the parking lot, then spend the next three hours looking for a Redd’s Apple Ale booth.

It’s a bummer to go to one of these things alone, but it’s also possible to roll too deep. A large crowd of diverse palates becomes cumbersome in tight spaces and untenable in decision-making situations. Any more than three or four people in your group and you’re probably going to miss out on something special.

This is the keystone tenet of my beer festival strategy, and the best way to keep from getting hammered in the opening hour. If a brewery doesn’t bring a beer that I can’t find within a few miles of my house, I probably won’t visit their booth. Gravitate toward bottles and growlers over tap pours—breweries generally bring kegs of their readily available flagship beers, but the special stuff comes out of glass.

TRUST YOUR EYES AND EARS MORE THAN YOU TRUST MAPS AND BROCHURES.

Last-second no-shows occur at pretty much every beer festival, and tap lists can switch up long after a festival’s maps and brochures go to print. Value your senses over any printed material: Keep an eye out for scheduled special pours, prick up your ears when you hear someone raving about a must-try beer, and most importantly in terms of efficiency, window-shop tap lists while you sample.

IF THERE’S A LONG LINE, IT’S PROBABLY FOR A GOOD REASON.

Last September’s California Craft Brewers Showcase offered a compelling argument for putting your faith in numbers. With nearly every California brewery in town for the California Craft Beer Summit, the showcase presented an embarrassment of riches, to the point that only a few booths found themselves with long lines, including Russian River, Sante Adairius, Mraz and The Rare Barrel. Now that’s crowdsourcing you can believe in.