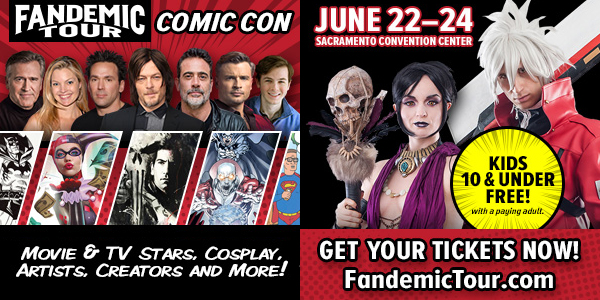 Walking Dead, This is Us, Guardians of the Galaxy Celebrity Panels Lead Programming for Inaugural Fandemic Tour Comic Con in Sacramento June 22-24

Tickets on sale now for a weekend of fun with major celebrities, artists and cosplayers

(Los Angeles, Calif.) – Just three weeks until the inaugural Fandemic Tour, a new touring comic con, will debut at the Sacramento Convention Center June 22-24, 2018. Fandemic Tour is produced by the former CEO of Wizard World, John Macaluso, is now bringing that experience back to Sacramento and a new show in Houston, rescheduled from 2017 due to Hurricane Harvey. Fandemic Tour will stop in Houston Sept. 14-16, 2018. Many of the celebrities and notable artists and authors are featured in interactive programming throughout the weekend. A key feature of any great comic con, programming is where the fans get a chance to really get to know their favorite stars, hear breaking news about their current and future projects, meet like-minded fans of the content and maybe learn something new about pop culture, fandom and how their peers are using their passions to create social change.

“Sacramento has always been a great city for my shows and I can’t wait to bring the celebrities, creators and fans together for a great first event!”, explained John Macaluso, Fandemic Tour comic con CEO. “We have an solid celebrity and creator lineup that fans are excited about but we always want their input on how to make it better. We’ve been very impressed with the support we’ve already received from the city and the fans who have helped spread the word about our new show.”

Fan connections will be made at these panels and demos featuring some of the best:

Programming will also include socially-focused topics: Fandemic Tour will offer attendees the opportunity to purchase autographs and photo opportunities with their favorite celebrity talent and artists.

Fandemic Tour will feature celebrities including: Norman Reedus (The Walking Dead, The Boondock Saints), Jeffrey Dean Morgan (The Walking Dead, Magic City), Michael Rooker (Guardians of the Galaxy, The Walking Dead, Tombstone, Cliffhanger, Days of Thunder), Chandler Riggs (The Walking Dead), Steven Yuen (The Walking Dead), .Sean Gunn (Guardians of the Galaxy, Gilmore Girls), Chris Sullivan, native of Sacramento, (“This is Us”, “Guardians of the Galaxy”), Milo Ventimiglia (This is Us, Heroes, Gilmore Girls), Chris Sullivan (This is Us, Guardians of the Galaxy), Tom Welling (Smallville, Lucifer), John Schneider (Smallville, The Dukes of Hazzard), Sean Patrick Flanery (The Boondock Saints, Powder, Young Indiana Jones), Jason David Frank (Mighty Morphin Power Rangers), Robert Englund (A Nightmare on Elm Street, Freddy vs. Jason), Christian Kane (The Librarians, Leverage), James Marsters (Buffy the Vampire Slayer, Angel), Bruce Campbell (“Ash vs. Evil Dead”), Robert England (“Nightmare on Elm Street”), David Della Rocca (“Boondock Saints”) and Clare Kramer (Buffy the Vampire Slayer, Bring it On). Fandemic Tour is a brand new experiential convention weekend that will bring together celebrities, well-known and emerging comic artists, cosplayers of all shapes and sizes, and exhibitors with merchandise designed to offer something for every type of pop culture fan. All confirmed talent will make appearances on at least two days of the weekend, and many will appear on all three days. All guest appearance dates are listed at http://www.FandemicTour.com.

General Admission tickets are available at the following price points:

Fandemic Tour is a new comic con bringing fandom, fun and family together to celebrate pop culture. Fandemic Tour will provide programming open to all who attend throughout the weekend. Throughout the three-day event, attendees can purchase autographs and photo ops with Fandemic Tour celebrities. Photo opportunities come in the form of a photo of you and the celebrity guest taken on a professional camera under ideal lighting conditions. Photos are printed on 8×10” paper on dye-sublimation photo printers. Most guests are available for at least two of the three days of the event, and all details are available at www.FandemicTour.com.

Laugh at B Street