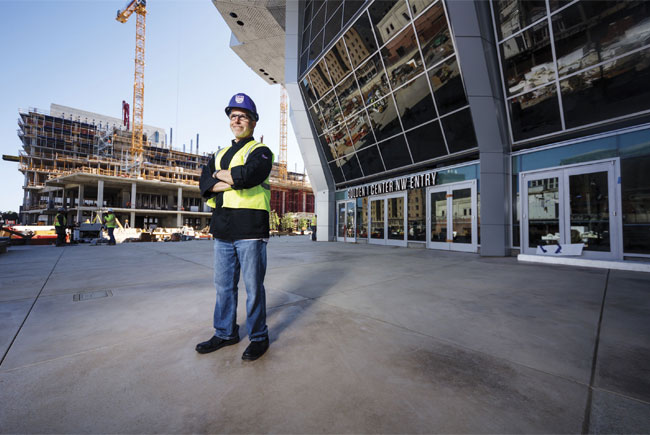 This story starts in 2014. Michael Tuohy was meeting with his bosses at midtown’s Block Butcher Bar, reporting on his efforts to improve the sausages at LowBrau Bierhall, Block’s sister restaurant next door. Get them up to snuff, he told them, and perhaps they could strike a deal to serve the sausages at the airport, maybe even at the city’s hotly anticipated downtown sports and entertainment arena.

The next day, Tuohy got a call from Randy Paragary. Legends Hospitality, the New York-based company hoping to win the contract to run food operations at the arena, was looking for a chef to lead its effort, said Paragary. Would Tuohy be interested? Tuohy said he was flattered but wasn’t an arena chef. That’s OK, he was told: Legends didn’t want an arena chef.

What it wanted was somebody who understood Sacramento’s unique farm-to-fork ethos and could integrate it into arena food. Tuohy, who’d put Sacramento’s Grange restaurant on the map several years earlier with his farm-focused cuisine, was intrigued.

Within weeks, Tuohy had left Block and joined Legends. Today, he’s gearing up for the biggest game of his life: overseeing the massive food-and-beverage operation for Golden 1 Center. His purview? Everything from the hot dogs sold at the concession stands to the caviar served in the arena’s corporate suites and private dining rooms.

Tuohy is an interesting person to be the highly public face of Sacramento food. Raised in the Bay Area, he spent most of his career in Atlanta, where he owned several highly regarded restaurants and was known for his farm-to-table cuisine. By 2008, he was at a crossroads. Wanting to return to the Golden State, he considered buying a restaurant in Sonoma and interviewed for a job as culinary director at Copia, the now-defunct food and wine center in Napa. Then he heard that a Bay Area hotel firm needed an executive chef for a boutique hotel it was opening in Sacramento. The company was looking for somebody to create a farm-to-table restaurant, working closely with local farmers. Tuohy got the job. At The Citizen Hotel, he ran catering, private dining and room service in addition to the restaurant. Kevin Johnson, the city’s new mayor, was a regular at Grange. So was then-Gov. Arnold Schwarzenegger. Tuohy befriended local growers and led weekly chef’s tours of the Wednesday farmers market in Cesar Chavez Plaza across the street from the hotel.

In 2011, with the hotel under new owners, Tuohy left Grange and decamped for Napa. For a while, he worked for Dean & DeLuca in St. Helena. Later, he did some food consulting, including a brief stint at Google headquarters in Mountain View.

But Sacramento had worked its quiet charms on him. He loved the city and had friends in the restaurant and farm communities here. Tuohy was at Cesar Chavez Plaza when Johnson announced Sacramento’s rebranding as America’s Farm-to-Fork Capital. Many of his chef friends were there. “It was like I’d never left,” he recalls.

Back in Sacramento, Tuohy made plans to open a charcuterie-focused restaurant. Then he learned that LowBrau owners Michael Hargis and Clay Nutting were doing the same thing. So instead he went to work for the pair, helping to open Block Butcher Bar in 2014.

So when Paragary called, Tuohy was ready for a new challenge. The Kings organization had partnered with the city to build the $500 million arena and put out a request for proposal, seeking a company to run the arena’s food operations. Big institutional food players like Aramark and Sodexo were bidding for the job.

The Kings made it clear to the bidders that they weren’t interested in serving mediocre-tasting, low-quality stadium fare. No crummy hot dogs, no frozen pizza. The Sacramento Bee’s food critic, Blair Anthony Robertson, had recently blasted the food at Sleep Train Arena as “mostly lackluster, sometimes inedible and always overpriced.” With the new arena, the Kings saw an opportunity to piggyback on Sacramento’s farm-to-fork reputation to provide top-notch, locally sourced cuisine.

Legends is a relative newcomer to the food services and facilities management industry. It was started eight years ago by two powerhouse sports families: the Steinbrenners of NY Yankees fame and the Joneses, whose patriarch, Jerry, owns the Dallas Cowboys. Privately held rather than publicly traded, the company is considered to be more nimble and entrepreneurial than many of its competitors. It services teams in five major professional sports leagues and operates at some of the biggest sports and entertainment facilities in the country: Yankee Stadium; AT&T Stadium in Arlington, Texas, the Cowboys’ home turf; Los Angeles Memorial Coliseum, home to the Rams and USC’s Trojans; the Rose Bowl in Pasadena.

Legends has a reputation for its “farm-to-fan” food. In 2014, the company overhauled the concession stands at Newark’s Prudential Center, focusing on locally sourced ingredients and partnerships with big-name chefs like Mike Isabella and David Burke—both New Jersey natives. It did the same thing for Angel Stadium in Anaheim.

In its winning proposal for Golden 1, Legends promised to source 90 percent of the arena’s food and beverages from within 150 miles and to work with some of Sacramento’s top chefs to come up with concepts for the concession stands. (Legends doesn’t like the word “concession,” preferring the term “local eats.”) Legends put on an impressive show of culinary firepower, touting its local food partners: Paragary’s Restaurant Group, Block Butcher Bar and LowBrau, Mulvaney’s B&L, Selland Family Restaurants and Mikuni. (Star Ginger’s Mai Pham and Petra Greek were added later for culinary diversity.)

When the arena opens Oct. 4, Golden 1 Center will have 16 food stands located on the main and upper concourses. Each restaurant partner will have one or more branded kiosks within the arena. Paragary’s, for instance, will have two Cafe Bernardo stands serving burgers and shakes, plus two Paragary’s pizza stands and a Centro taco stand. Each stand will be a distilled, quick-food version of the original restaurant on which it’s based. Mulvaney’s stand, for example, will offer red chili pulled pork sandwiches and Central Valley slaw. There will also be a few original-concept stands, such as Porchetta House, inspired by the charcuterie business Tuohy had once hoped to open in Sacramento. On the upper concourse, a balcony overlooking the basketball court will house a large craft beer bar, sponsored by Sierra Nevada Brewing Company

Randy Paragary, Patrick Mulvaney and the other restaurant partners had input into their stands’ menus, recipes and ingredients. But their involvement ends there. Tuohy will oversee everything related to the food served within the arena: sourcing ingredients, prepping and cooking in the arena’s massive basement kitchens, staffing, serving, cleaning up. On game and event days, he’ll have as many as 600 employees working for him.

Most of the 19,000 people who pass through Golden 1’s doors will eat at the food kiosks or at the 32 portable food and beverage carts scattered throughout the concourses. A much smaller slice of ticketholders will get to experience Tuohy’s “premium” food offerings. There are four club lounges open only to people with seats in the first 13 rows, and another club lounge for people in the arena suites. There, Tuohy will lay on a gratis spread of passed hors d’oeuvres and small bites. Within the lounges are private dining rooms with their own menus, serving luxury items like Passmore Ranch caviar.

For the past year and a half, Tuohy has spent much of his time working on local sourcing. Originally, Kings president Chris Granger asked if everything could be grown or produced within 25 miles of Sacramento. Not possible, said Tuohy, who considers 150 miles a more realistic figure. He’s sourcing natural-casing hot dogs from the Bay Area’s Schwarz Sausage Co. (Just for the record, they’re delicious.) He selected organic tortilla chips from Casa Sanchez in San Francisco for the nachos and Petaluma Creamery cheese for the house-made cheese sauce. Meats will come from Mary’s Chickens in Fresno and Llano Seco Rancho in Chico. Local farmers like Rich Collins of California Endive will supply produce. LowBrau will provide sausages. Beer will rotate from some of the region’s 50-plus craft breweries, including Ruhstaller and Track 7. The coffee is roasted locally. Tuohy didn’t want to play favorites, so he’ll buy beans from Temple, Chocolate Fish and Old Soul.

Local food, chef partnerships: It’s all part of the changing nature of food at sports and entertainment venues. At Golden 1 Center, you may find yourself cheering the Kings with a LowBrau bratwurst in one hand, a Left Eye Right Eye double IPA from Track 7 in the other. Who knows? By this time next year, Sacramento may be known as the country’s farm-to-fan capital.