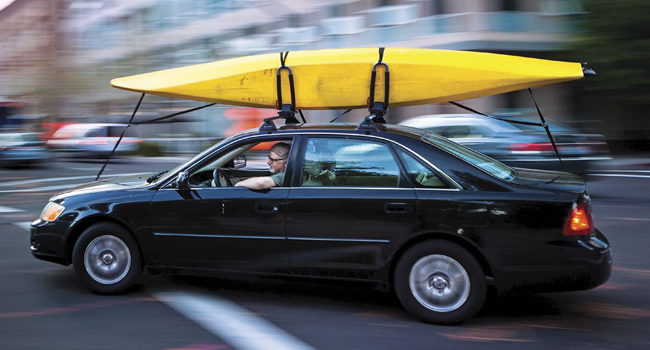 A couple of years ago, my friend Cy got me interested in kayaking. On our first few voyages together, I used a spare kayak of Cy’s, but eventually I began looking for a kayak of my own. In January 2014, I acquired an Oru kayak, a 12-foot-long craft that, when not in use, could be folded up like a giant piece of origami into a square box not much larger than a standard suitcase. I bought the Oru because it allowed me to forgo purchasing a roof rack for my car. A conventional kayak can be transported only on the roof of a car or (less commonly) via a trailer. The Oru slipped easily into my car’s trunk, which was good, because after spending $850 on the kayak, I didn’t want to buy a roof rack, too. So whenever Cy and I went kayaking, he would roof-rack his boat and I’d toss mine into the back of his SUV. I felt slightly guilty about the fact that, for our trips to Tomales Bay or Emerald Bay or even the nearby Cosumnes River, we always had to take Cy’s vehicle. But, hey, was it my fault that Cy had an unfoldable boat? If he had purchased an Oru like mine, we could have shared the driving duties. My rackless car could easily have carried two Orus: one in the trunk and the other in the back seat.

I got along fine until my wife, Julie, got interested in kayaking. Now Cy had to rooftop two boats on his SUV, his own and his spare, in order to accommodate the needs of all three of us. Primitive as it is, my sense of right and wrong began to tell me that I was taking advantage of Cy’s generosity. Eventually, I was forced to conclude that both the conventions of friendship and plain old common decency dictated that I should not only buy another kayak, but that I should buy a roof rack for my car so that I could bear my fair share of the transportation duties.

I put out the word to everyone I knew that if they should hear of a used kayak for sale at a bargain price, I wanted to know about it. Whenever a customer at the bookstore where I work purchased a book or a magazine dealing with outdoor recreation, I would ask if he or she knew anyone who might be looking to sell a used kayak. One evening, I found myself assisting a customer who was a struggling artist and was looking for a guide to selling one’s artwork. He mentioned that he was originally from Detroit. I suggested that now might be the time to return to Detroit. To help revitalize the city’s dying urban core, a nonprofit group there is giving away houses to struggling artists and writers.

“I could never leave California, man,” the artist, who looked and sounded like a laid-back surfer dude, told me. “I love it here: the sunlight, the mountains, the beaches, the kayaking.”

Bingo. It turned out the surfer dude owned two kayaks and was looking to sell one. A few days later, we stood outside an art studio on S Street and he showed me a battered 14-foot kayak that had been moldering in the sun for years because the girlfriend he bought it for was never able to develop an interest in water sports. A heavy old ladder and a bunch of other junk lay on top of the kayak, apparently to discourage theft. I paid the struggling artist $200, and he car-topped the boat over to my house and deposited it in the driveway. Now that I owned an unfoldable boat, I was resigned to the fact that I would have to buy a rack for my car.

Some kayakers transport their boats atop the roof of a car using only a couple of Styrofoam pool noodles and bunch of bungee cords. But, cheap as I am, I was unwilling to follow their example. A kayak that is improperly car-topped can become a deadly flying object on the freeway. I did some pricing research on the Internet, but eventually I found myself at a local shop that specializes in roof racks, where I purchased a good but not-quite-top-of-the-line model that cost more than three times what I had paid for the kayak. This seemed absurd to me, like buying a $1,000 TV stand for a $200 TV. I suffered from a bad case of sticker shock for days, until it dawned on me that Julie and I were now free to go kayaking whenever we wanted. We were no longer dependent upon Cy. I realized that my new roof rack represented freedom. Who can put a price on freedom?

Alas, Julie’s work schedule pretty much precludes her from doing any weekday kayaking. And I didn’t have much desire to go kayaking alone. Thus, the roof rack didn’t really create any more kayaking opportunities for me. Nonetheless, every few days, I’d haul my new kayak out of the garage, hoist it onto the rack atop my car, fasten it with four different security ropes (two in the middle and one at each end), and then leave it there until I could summon the energy to take it back down and stow it in the garage again. I did this for practice, so that I wouldn’t look like an idiot when I actually had to strap the boat to the roof of the car in some public place where real kayakers might be watching me. Sometimes I’d drive to the grocery store or the post office with the boat strapped to the top of my car. I told myself I was testing the security of my racking system, but in reality I just liked the idea of driving around town with a kayak on my car. The one drawback of the Oru was that it was always hidden away in the trunk of my car. I envied those kayakers who could drive through town with a 15- or 16-foot boat atop their vehicle, announcing to all the world just how rugged and outdoorsy they were. As a kid in chilly Portland, Ore., I used to moon over photos of old woodie station wagons with three surfboards stacked side by side on the roof and a California coastline in the background, populated by bikini-clad beauties. That’s the spirit I was trying to capture every time I hoisted that boat to the top of my car.

So if you should see a gray-headed old guy driving around town with a big yellow kayak strapped to the roof of his old Toyota sedan, don’t automatically assume that he’s on his way to a whitewater adventure. It may just be me, driving to the grocery store to pick up some salad dressing for tonight’s dinner.