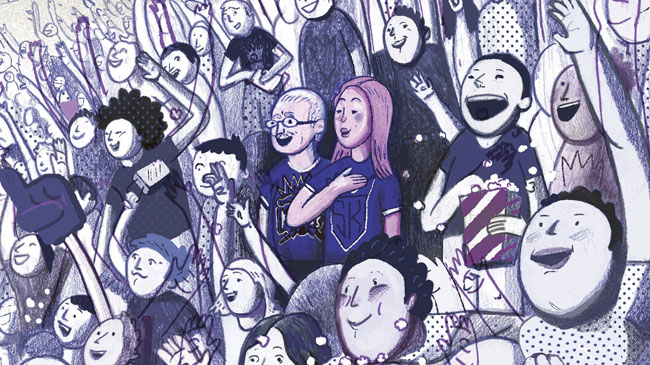 I knew that I’d cry. The national anthem gets me every time, and I knew heading into the final Kings game at Sleep Train Arena there was zero chance I was making it to tipoff with dry eyes. The game marked the end of an era and the beginning of another one, a celebration of all the memories we’d made in that old barn and a wonder of fandom in the face of so many losing seasons. Everything about it was charged with nostalgia and emotion, and I wanted to brace myself for just what I should expect for “The Star-Spangled Banner,” how much tissue I should bring. I pressed a friend who happens to be a higher-up in the Kings marketing department, but she refused to tell me. Were they going all-out? Was Adele performing?! Or would it be someone more connected to Sacramento? She wouldn’t budge.

When the lights finally dimmed and announcer Scott Moak told us to rise one last time to pay tribute to the American flag hanging from the catwalk, I looked out to center court and saw . . . the Sign Lady. And a couple Sacramento Kings Dancers. And Slamson. And a handful of fans and Kings staffers, and one guy with an acoustic guitar. “Tonight’s national anthem will be sung by you, by the Kings’ sixth man,” Moak announced. So with my hand over my heart and a lump in my throat, I did my part. In the absence of a celebrity singer and a prerecorded instrumental soundtrack, the voice that I heard most clearly was the voice right next to me: my dad’s. It was as perfect a Sacramento Kings moment as they come.

My dad has been taking me to Kings games at Arco/Sleep Train Arena for 28 years, and the time we’ve spent together in that building has given me some of the most valuable education of my life.

My dad taught me how to root in that building. There is cheering, which is loud and showy, the thing that comes naturally for most kids by the time they are presented with their first piñata or pined-for birthday gift. But cheering is not rooting. To root is to pin a bit of your own well-being to the trajectory of this basketball team, to desire their success from a place so deep that it defies reason. “It’s only basketball” is the consolation of the reasonable, the guarded, the fan who may know how to cheer but doesn’t root from the heart. It wasn’t just a basketball team that played in that building—it was our hometown team. In the early years, in the Section 225, Row W years, I understood that we were united with anyone within high-fiving distance from our seats. Nobody high-fives like fans in the nosebleed seats when their not-great team is actually doing well. Nobody. And when our team didn’t do well, we drove home in silence. We watched as, year by year, cow fields turned into tract homes, and the Kings went from bad to great to bad again. But none of that had any impact on how hard we’d root at the next game. That’s not the kind of fan my dad taught me to be.

I learned about teamwork in that building. When I was very young, my dad taught me the terms: assist, alley-oop, ball movement, passing game. And as I got older, he made sure I understood that life is best played as a team sport as well. He talked with me about players’ roles, about the value of an unselfish point guard and how the big guy isn’t the whole story. When the Kings were good, in the midst of the Bibby-Peja-Vlade-Webber-Christie hype, he told me we could beat the Lakers not in spite of our lack of star power, but precisely because, in the absence of a Kobe or a Shaq, we had the thing every coach dreams of: a team that played like a team. We watched some exciting wins and too many losses together in that building, and no matter which way the final scoreboard went, it went that way for all of us. We were the sixth man; we were a team.

My dad taught me about loyalty in that building. In all of the marketing material that surrounded that final game, the video montages and heartfelt speeches and flashy tributes, the loyalty of the fans was paramount. The thing that the Kings organization isn’t allowed to say out loud is why that fan loyalty is so special: For a majority of the 28 years that Kings fans have been attending games out in Natomas, the Kings have kind of sucked. They sucked in 1988 when Arco Arena was christened by a sold-out crowd and an ownership group in tuxedos. They were just so-so in 2011 when we faced the first panic that they might leave Sacramento. And in 2012, when the move to Seattle seemed all but imminent, they lost nearly twice as many games as they won. But we never loved them more. We never cheered louder. We never fought harder. We wanted the wins—God, how we longed for the glory years—but we were Kings fans no matter what. You didn’t buy a ticket because you expected a victory; you bought a ticket because it’s what loyal fans do. We showed up for what we loved.

And that’s really the most important thing that my dad taught me in that building: that lesson about showing up for what you love. Because in all of it, in all of the teachable moments and the popcorn and the wins and the losses and the high-fives and the heartbreaks, what my dad showed me again and again was that he loved me and wanted to spend time with me. He invited me to share in his interests and come into his world. He used his extra ticket on me, and it meant everything to me.

As a parent now, I hope to carry on the tradition at Golden 1 Center that began at Arco. I hope to show my kids what it means to root for a hometown team, and how, “Will you come to this game with me?” is just another way to say, “I love you.”