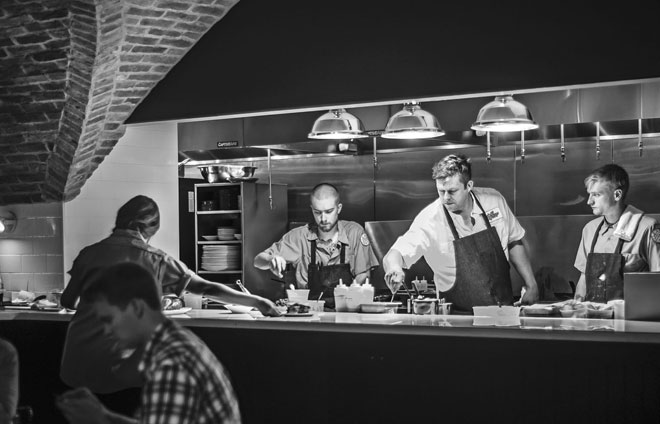 After an almost three-year wait, Empress Tavern finally opened in early September in the basement of K Street’s Crest Theatre. If its predecessor Mother is anything to go by, Empress could be Sacramento’s blockbuster restaurant of the year.

Bob Emerick bought the Crest several years ago intending to turn two below-ground movie theaters into a restaurant. In need of a chef, he turned to Ryan Donahue, a food photographer and journalist with tons of friends in the restaurant business. Donahue connected him with Michael Thiemann, a former Ella headliner who was running Tyler Florence’s restaurant empire in San Francisco. While remodeling the underground theaters (a lengthy undertaking), the three opened Mother, a casual vegetarian restaurant that immediately caught fire with its wildly inventive approach to plant-centric cuisine. Meat plays the starring role at Empress Tavern. The concept: old-world carvery. “We’re somewhere between a barbecue place, a steakhouse and a Boston Market,” says Thiemann before finally settling on hofbrau as the best descriptor. Whole chickens, prime rib roasts, legs of lamb and hams roast low and slow on a massive, gleaming rotisserie at center stage in the open kitchen. Everything is served a la carte, a fact that’s reflected in the price: A half chicken is $16; sides are $6 and meant to be shared—things like whipped potatoes with pork gravy, buttered steamed vegetables and black-eyed peas with burnt ends. The menu also features dishes such as beef cheek stroganoff and the classic French dip sandwich, made with prime rib, chicken or porchetta. “Family dinner” for four includes a self-serve bowl of salad, two sides and a main such as cote de boeuf, a 32-ounce bone-in rib-eye that’s carved tableside. Masera oversees desserts. “He’s so good with sweets,” says Thiemann. “His ice creams make you tear up.” Lauren De Vine, a national bar consultant who’s known Thiemann for years, created the gin-focused cocktail program. It’s designed to be food friendly and feminine, with fresh and wild-foraged ingredients and subtle flavors to balance the protein-heavy menu. Instead of names, the 15 cocktails are listed on the menu by ingredients. One drink reads like this: Artichoke/Thai Basil/Fennel Soda/Fords Gin. “It’s a culinary, flavor-building point of view,” says De Vine. A couple of cocktails are served out of teapots for a whimsical bit of theatricality. The 45-bottle beer list was curated by Bay Area distributor Marie Davenport, another friend of Thiemann’s. Wine broker Jonathan Klonecke selected the wines, many of them served on draft by the glass or carafe.

Starting with Mother, the Empress team has shown a talent for what they call “programming”—things that bring diners in the door, like dinner-and-movie tie-ins at the Crest, videos on social media, and 86’d, a friendly local-chef competition similar to TV’s “Knife Fight.” “Mother is the incubator,” Thiemann says. “We have other things up our sleeve.”

All the reviews aren’t in yet, but Thiemann et al. are already looking to future projects: There’s Maiden, Masera’s line of organic ice creams, which may be spun off into an ice cream cart or a brick-and-mortar shop. Now that he’s conquered meat and vegetables, Thiemann is talking about opening a seafood-focused restaurant.