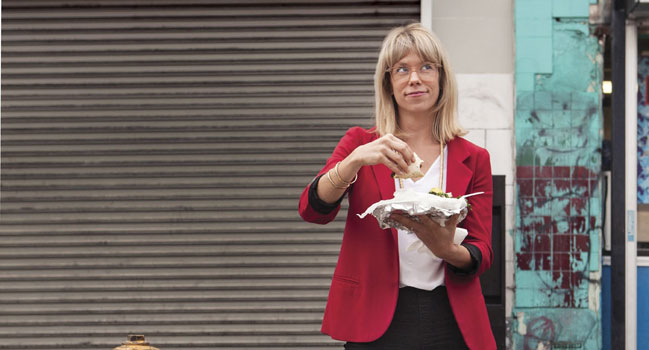 Lesley Bargar Suter, the Fair Oaks native who won a James Beard Award in 2012 for her food reporting for Los Angeles magazine, traces her journalism roots back to her days as a teenage music fan. “It all started in Sacramento when I would go see punk bands at the Cattle Club as a 13-year-old,” says Suter, who parlayed her love of music into a job as associate editor at the now-defunct music magazine Filter after graduating from UCLA. Now 34, she oversees food coverage for Los Angeles mag, a high-powered position that has landed her numerous radio and television gigs, including appearances on “Hell’s Kitchen” and “Top Chef Masters.” We recently caught up with Suter to dish on her Sacramento origins, LA’s food culture and the local spot that won her over.

HOMETOWN INFLUENCES—Suter grew up in a family that loved to dine out. “Our house is really close to the original branch of Mikuni, so that was where my understanding of sushi was founded. In the ’90s, it was the pinnacle of over-the-top, crazy rolls with wild sauces. To me, it was the coolest place. For a fancy night out, we would go to Biba. She [Biba Caggiano] was my first idea of a celebrity chef.”

HOW ANGELENOS ARE EATING—When Suter took the food-editing reigns at the magazine six years ago, “the emphasis was on a handful of fine-dining restaurants.” Since then, “the entire scene has exploded” across Los Angeles, with ethnic foods and street foods leading the way. “People are getting hyper-regional,” she adds. “It’s no longer just Mexican food. It’s Oaxacan food, or food from Puebla, or it’s Mexico City-style.”

A LITTLE STALE—What trends have run their course? “I’m tired of small plates. I like the way it’s sort of opened up the style of dining, but there are times when you’re a table of two and you don’t want to order 17 things. Or it’s not paced well: It all comes out of the kitchen at once, and you’re rushing to eat it before it gets cold.”

WHY THE WORD ‘FOODIE’ IS VERBOTEN—“As an editor, it’s on my Do Not Use list as much as possible. If someone tells me they’re a foodie, I always ask, ‘In what way?’ I’d rather hear what they’re passionate about—maybe they’re really into farmers markets or fine dining or sushi.”

ON THE AIR—Perhaps it was inevitable that Suter would land regular TV and radio gigs. “My high school Academic Decathlon coach will remember that I won a bronze at state for public speaking,” she recalls with a laugh. Suter says she’s “much more comfortable in radio,” but doing TV has its perks. “It’s a day when you get to put on a cute dress and somebody does your makeup and you get to sit next to kind of famous people and talk about food. So in that way, it’s fun and totally surreal.”

THE RESTAURANT RACE—It’s a calorie-intense grind keeping tabs on LA’s dynamic food scene. “There’s so much going on, which makes it endlessly exciting and you never get bored, but it’s really hard to keep up with,” says Suter. “Blogs have been the secret to my success from day one. I definitely rely on other people in the city to tell me what’s happening.” She eats out three or four nights a week and keeps a spreadsheet on restaurants she needs to visit, “but even then I’m playing constant catch-up.”

ON THE MAP—So is word of Sacramento’s burgeoning food scene making its way south? “My perspective is skewed a little bit because my mother happens to be the city’s most enthusiastic unofficial booster. She is constantly sending me emails about what’s new there,” says Suter, who visits at least twice a year. “I went to the Tower Bridge dinner two years ago and it was wonderful. And I had a wonderful, wonderful meal at Mother. That was one of the best meals I had last year. It was just great.