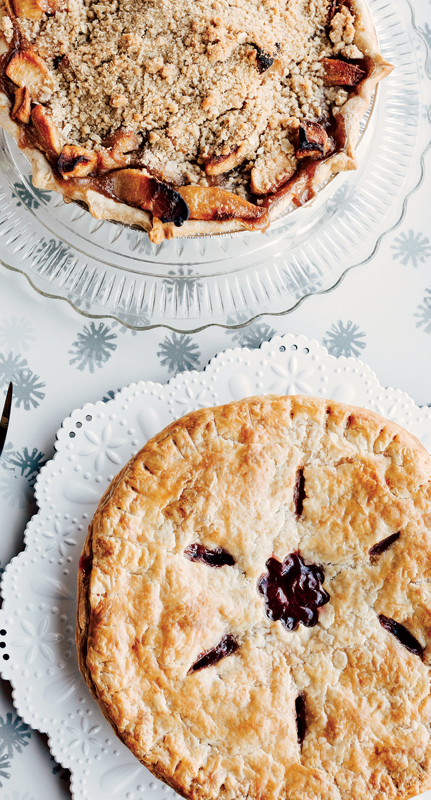 I’m enchanted by movies that center around food. “Chocolat.” “Babette’s Feast.” “Like Water for Chocolate.” In each of these films, food is a stand-in for something mysterious and magical—love, friendship, human connection.

I couldn’t stop thinking about these movies after visiting Real Pie Company, which opened in mid-April on 24th Street near Broadway. The story of how it came to be reads like a movie plot. Young woman opens pie shop, then closes it to tend to family. Woman gets divorced. Kids grow up. Woman finds love again and reopens pie shop with new partner.

Kira O’Donnell Babich opened the first Real Pie Company in 2007 in a gritty part of midtown. People went crazy for her handmade, all-butter-crust, seasonal fruit pies, and the shop was a success. But her young family was suffering. “Mommy doesn’t live at home anymore,” her daughter told a teacher. “She lives at a pie shop.” Number one on her son’s Christmas list that year: “Mommy.”

O’Donnell Babich forged a unique, almost mystical bond with her customers. When she closed in 2008, people started lining up outside the shop at 5 a.m. for one last pie. In the decade that followed, she kept in touch through newsletters, emails and periodic offerings of pies. And she never stopped dreaming of restarting the business. But she needed the right partner. Then she met and fell in love with Fred Babich, a commercial helicopter pilot with an entrepreneurial bent and a lifelong dream of owning a dessert shop. When a shoulder injury put him out of commission for eight months, Babich spent his recuperation writing a business plan. She would be in charge of the pies; he would handle the business. Together, they drew designs for the shop’s interior on their honeymoon. “I wanted it to feel cozy and welcoming,” says O’Donnell Babich.

Located in an old computer parts warehouse, the new shop is bigger and better capitalized than the original. The homey yellow dining room is decorated with blown-up photos of produce from local farmers markets. There’s plenty of seating, including a handmade wood community table. A window into the kitchen displays staffers at work. The all-butter crusts are made and rolled out in a large, temperature-controlled dough room, kept a chilly 64 degrees. Says O’Donnell Babich, “This place feels like what I always hoped it would be.” Lining up for pie

On opening day, dozens of people lined up on the sidewalk—a mirror image of the shop’s sad last day in 2008. Favorite offerings from the old shop are back: jumbleberry pie, with juicy marionberries, cherries, wild blueberries and raspberries peeking through a star-shaped cutout in the top crust; butterscotch-banana cream pie; rustic fruit galette of the day. There are tarts, hand pies, quiches, savory pot pies and shepherd’s pies. For the “pie milkshake,” a slice of pie is whizzed in a blender with Gunther’s ice cream. (Smooth or chunky: your choice.) There are also a few non-pie items, like meatloaf sandwich and mac-and-cheese with broccoli.

The pie crust is as buttery and flaky as ever—more like puff pastry than pie dough. While O’Donnell Babich doesn’t personally make each pie by hand anymore, she still has her hand in every aspect of production. She can tell by feel if the dough is the right texture and moisture. She originally planned an ambitious menu of pies with unusual ingredients like kabocha squash or roasted beets. But customers told her they wanted the classics: apple, pumpkin, Key lime. “Maybe it’s a sign of the times,” she says. “I think people want comfort right now.” The shop has a box labeled “Wish you made . . . ,” where customers can write down what pies they want on slips of paper. Once a week, the Babiches sit down with a glass of wine, open the box and review the suggestions. “It’s a wonderful road map for us,” says O’Donnell Babich. In one of my favorite food movies, “It’s Complicated,” Meryl Streep plays a bakery owner who falls in love with an architect played by Steve Martin. In a memorable scene, they make chocolate croissants together late one night in her bakery kitchen. It’s funny and sweet and sexy. It gives me an idea for a movie about a former pie shop owner who falls in love with a helicopter pilot . . .