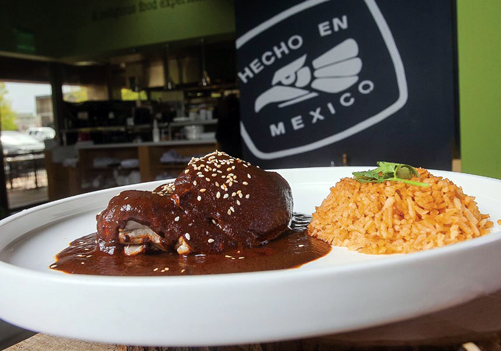 PICK YOUR POISON. Coffee or whiskey? Cake or gelato? Japanese or Mexican food? Burgers or brew? You can have it all at Carmichael’s culinary one-stop shop, Milagro Centre. To fill the nearly 50,000-square-foot center, part owner Allan Davis chose tenants with strong ties to Sacramento. Says Davis, “I wanted to create a gathering space where people can just come and hang out and mingle.” He also admits that Milagro Centre has probably doubled Carmichael’s culinary options in one fell swoop. “At least,” he says.

The center’s final tenant, a restaurant and whiskey bar called Patriot, is expected to open in the coming months. Founded by Broderick Roadhouse owner Chris Jarosz, Patriot will have a deli counter and pizza bar. Sharing a building with Patriot is an 8,500-square-foot event center with a demonstration kitchen. While Jarosz is excited about the performance aspect of the event center, he was also drawn by the communal aspect at Milagro. “It’s a different type of brick-and-mortar for me. Somebody can get a plate from my restaurant and then go over to Ernesto’s or Billy’s. Everything is there, and that’s a pretty cool thing.”