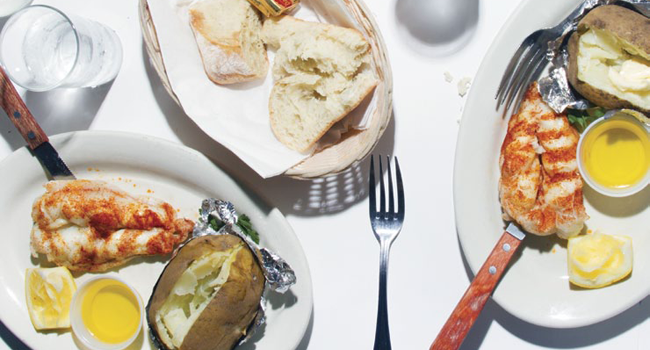 I recently befriended a young man from Boston who’d just moved to Sacramento. He’d thoroughly investigated every craft cocktail-stained nook and cranny of midtown, but he still hadn’t found a sense of place or community here. Wanting to show him the region’s character, I took him to Giusti’s in Walnut Grove. A rickety wooden building built right up against the water, Giusti’s is a fisherman’s stop, as easily accessible by boat as it is by car. The floors are canted and creaking; the building looks like it would take only a strong gust of Delta wind to topple it over. The rooms are claustrophobic, the servers gruff, the food no-frills.

The Bostonian and I tucked ourselves into a dark, cozy corner of the dining room with a bottle of red wine between us and ordered the Wednesday-night special: lobster tail for two. For $30.50, we got bread and butter, minestrone soup, a mixed greens salad, bean salad, baked potatoes and a thick lobster tail with lemon. “The meat’s a little chewy,” my partner said. New England seafood snob. (He ate the whole thing, of course.)

After dinner, intoxicated on wine and silty river water, we wandered over to the bar to chat with the remaining few patrons sipping their Coors. With the jukebox singing softly behind us, we told the other barflies that we were on a date (a lie), that it was our four-year anniversary (another lie), and that I had brought him here to teach him about California’s past (a truth). Something about Giusti’s, dilapidated and aggressively uncool as it is, made us both feel like spinning a yarn about our lives being a little less lonely and a little more connected than maybe we had felt before we’d driven up the gravel driveway earlier that evening. If only for a few hours in this strange river hideaway, full on lobster and melted butter, we were able to fabricate a new—if fleeting—sense of belonging.

I’m not sure my friend from Boston was dazzled by Giusti’s. But I didn’t take him to this Delta shack to show him the heights of Sacramento culinary culture. I wanted to show him California history, and I wanted him to know that even though he has yet to find his tribe out here, there are places that are welcoming, warm and without pretension. I think I succeeded. 14743 Walnut Grove-Thornton Road, Walnut Grove; (916) 776-1808; giustis.com