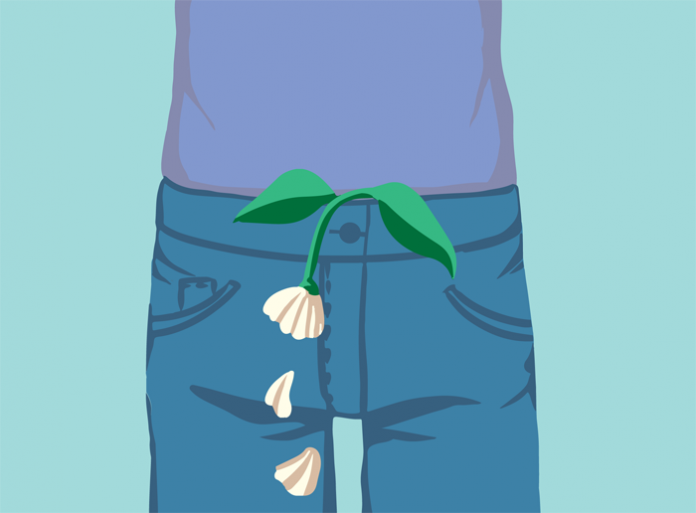 You’ve probably heard the notion that men think of sex every seven seconds. Preposterous. (Also unprovable.) Still, this myth is rooted in one basic truth: Sex is a helluva drug. Its rewards go well beyond mere pleasure. It buoys confidence and maintains the bonds of a relationship. Regular sex is correlated with a healthy immune function and better sleep. One study found men who had more frequent orgasms were less likely to receive a prostate cancer diagnosis. Another reported such men had a 50 percent lower mortality risk.

Of course, I don’t need to sell you on erection benefits. You’ve seen the ads. Remember the couple watching the sunset from separate outdoor bathtubs? It didn’t even say what the drug treated, but you got the idea. Maybe you had a good laugh about it.

But then the day of erectile reckoning finally arrives. You say for the first, second or third time, “This has never happened before.” It could just be an isolated incident, perhaps the result of alcohol or less licit diversions. But once it becomes “a thing,” it’s time to see a doctor.

One doctor who sees a lot of ED patients is Michael Novotny, M.D., Ph.D. Early on in his career, he had intended to pursue pathology, but that changed during a rotation at a VA hospital. The urology patients were so appreciative of the care they received, he decided to make that his focus. Today, he is a urologist with Kaiser Permanente Sacramento, and he gets a lot of ED referrals.

Novotny says erectile dysfunction is characterized by “the inability to either get or sustain an erection to have sexual intercourse.” Just over half of all men experience it at some point, more so with age. It affects roughly 40 percent of men age 40, and 70 percent of men age 70.

Medically speaking, what causes an erection to fail? There is often no simple answer. Erections are complex events that require several biological systems to work together. The cardiovascular system provides the plumbing. The endocrine system provides the chemical instructions. The nervous system delivers mail from the brain. And the psyche sits precariously on top, trying not to overthink it. Novotny says, “It’s multifactorial. It’s often a combination of things that occurs over years before men see declining erections.”

One of the most common problems is atherosclerosis—hardening of the arteries, which prevents them from expanding and swelling up as needed. Diabetes, high blood pressure, smoking and high cholesterol are all common causes of atherosclerosis. In fact, just this past June, a four-year study published in the medical journal Circulation concluded men whose impotence is vascular-related are twice as likely to suffer a heart attack, stroke or sudden cardiac death. This was true even without other heart risk factors such as high blood pressure, high cholesterol or a history of smoking.

Another cause of ED, though less common, is hypogonadism. That means diminished function of the testes, which normally produce testosterone, the very fuel of sex drive. Certain types of cancer or cancer treatment can result in hypogonadism, as can use of anabolic steroids. However, low testosterone in absence of other health problems accounts for a small minority of men with erectile dysfunction.

Many drugs are known to cause ED as a side effect. Common culprits include alpha blockers and beta blockers for high blood pressure, chemotherapy, depressants like Xanax or Valium, stimulants like cocaine or amphetamines, Prozac or Paxil, and synthetic hormones.

A number of neurological conditions are known to cause erectile dysfunction, including Alzheimer’s or Parkinson’s disease, brain tumors, multiple sclerosis and stroke.

And then there’s neuroticism. Consider the curse of performance anxiety. After one failure, obsessing and worrying can cause subsequent failure. Conquering the enemy means first putting it out of your mind!

ED can also be a symptom of chronic stress or depression, which can cause aches and pains, chronic fatigue, loss of appetite and insomnia—all of which lead to decreased interest in sex.

It’s also possible that some lifestyle choices can affect performance. One seemingly innocuous perpetrator is bicycling. Riding long periods of time (on a seat that doesn’t have one of those grooves down the middle) can damage the nerves and vasculature related to erectile function.

One thing recent studies do show, however, is that ED rates seem to be on the rise among men under 40. A 2013 Italian study reported that one in four patients who sought help for new-onset ED were younger than 40, with rates of severe ED nearly 10 percent higher than in men over 40. In 2012, Swiss researchers found ED rates of 30 percent in a cross-section of Swiss men aged 18 to 24. What’s causing this generational anomaly? It may be related to a rise in steroid use. In July 2017, The Telegraph reported a dramatic increase in steroid use in Britain, mostly among men 16 to 24. A few years earlier, a report in the journal Pediatrics pointed to similar trends in the United States.

Whatever the cause, it is important to determine and address it, says Novotny. Getting problems like diabetes or high blood pressure under control can extend quality and quantity of life. “There is some evidence that if the patient actually gets those things under control,” says Novotny, “they might get some function back.” However, regardless of cause, treatment options are the same for most men.

First, there are those familiar pills, the PDE5 inhibitors. Viagra was the first to get FDA approval in 1998. (Funny story: It was originally developed for use as a high blood pressure medication. It was not deemed suitable for that purpose, but researchers noticed many test subjects weren’t turning their meds back in.) All the drugs in this class work in a similar fashion, the main difference among them being how long they take to kick in and how long they work. Viagra and Levitra take about 30 minutes to work and the effects last for about four hours. Cialis requires at least two hours of lead time, but the effects may last for up to 36 hours.

They’re now all available as generics (aka sildenafil, vardenafil, tadalafil, plus others). Unless the patient expresses a preference, Novotny generally prescribes Viagra/sildenafil because it’s the cheapest.

To enhance the drug’s efficacy, Novotny sometimes recommends a nonpharmacologic aid known colloquially as a cock ring—preferably one that’s adjustable like a bolo tie. “If a man can get an erection with medications, it helps by trapping the blood in the penis.” Novotny does not, however, recommend that perennial punchline, the penis pump. “The vacuum erection device is really not satisfactory.” He has heard it compared to “putting a twist tie on your finger until it turns purple.”

Oh, did those visualizations make you uncomfortable? You may wish to stop reading now. The remaining options are not for the squeamish.

One pharma product is called Muse (ingredient name: alprostadil). It looks like grain of rice and is inserted directly into the urethra using an applicator. Sound unpleasant? It is. “It tends to scratch the urethra, which causes urethritis. Not fun,” says Novotny. “Few men find it satisfactory.” Also, no insurance covers it and it’s prohibitively expensive. Anyone want to try it now? Didn’t think so.

Still no luck? You now graduate to medication by injection. And no, not in your arm. While the idea of needling your manhood may make you wince, guys apparently get used to it quickly—especially the diabetics in the crowd, who are already familiar with the practice.

“And if that doesn’t work, I pump you up,” says Novotny in his best Schwarzenegger. He means surgical implants: hydraulic devices that include a cylinder, pump and reservoir. He performs this 45-minute procedure fairly often and says that, with expectations properly set, “most men find implants satisfactory.” With the necessary arousal, the implant makes sensation and climax possible. Novotny told me about one patient who got his implant at age 74. After 15 years, the device finally stopped working. At 89, he got his second one and reported himself “the happiest guy in the world.” Also, Medicare covers implants, which is nice.

If you want to avoid doctors and/or pharmaceuticals, there is a gigantic industry eager to sell you “herbal supplements” with names like Rhino 7 and vague promises like “TIME | SIZE | STAMINA.” They sometimes contain substances, such as panax ginseng or an amino acid called L-arginine, that have even been studied with some promising (if not conclusive) results. Novotny recommends only medications “backed by science,” but when patients ask him about supplements, he says if it doesn’t cost a lot and it seems to work, that’s fine.

For all the science that’s been applied to this problem, there’s one key aspect of sex we have left out. The partner (and the relationship between the two). Emotional and physical health are inseparable. We’ve covered the medical part here, but don’t treat one and neglect the other. Keep open lines of communication. Be understanding and giving. Maybe even consider counseling. It might help with any problems that science can’t fix for you.