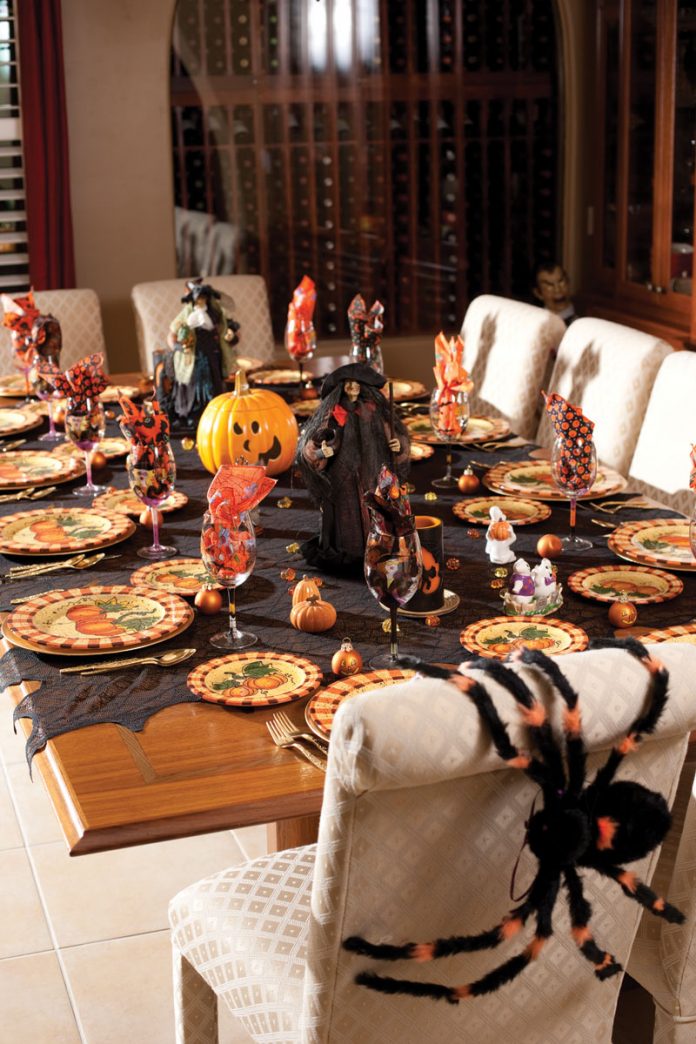 The big, fat stuffed spider hanging from a dining room chair is a dead giveaway. Halloween is one special day at Debbie and Steve Hammond’s El Dorado Hills home. No, wait a second. Scratch that. Make it: Halloween is one special couple of months.  Debbie typically starts spooking up the house in August. “It takes a while to get it all out,” she says about her stash of ghosts and witches, pumpkins and spiders, skulls and skeletons and a really big, really creepy figure she calls “the angel of death.” The Hammonds go all out for All Hallow’s Eve. Debbie wouldn’t have it any other way. No bones about it.

“Maybe I’m just an adult in a kid’s body,” she says about her Halloween fascination. Other than that, if she had to make a guess, she’d say it was the 25-plus years she spent owning and running retail gift shops in major hotels. During the course of her career, she had 14 shops in California, including six in Sacramento. “I guess it was just that I saw all of this cute stuff and I just became immersed.” When she sold the last of the shops four years ago, she was in way too deep to surrender her Halloween obsession. She was having too much fun.

The Hammonds love to play host any time of year, but Halloween dishes up the perfect excuse for a monster party. “I do most of the heavy lifting and hang the lights,” says Steve, “but Debbie manages all the decorations and the party, which is fine by me. She has a knack for that sort of thing, and I get excited each year just waiting to see what the final design will look like.” Last year, 50 to 100 friends, friends of friends and their children were invited to an open house. “Instead of trick-or-treating all over the valley, they come here,” says Debbie, admitting that, as a child, she wasn’t all that crazy about Oct. 31. “Oh, no, no. I was a little scared. So my Halloween is more cutesy and fun rather than scary.” Except for the angel of death and “Chucky.” Yes, Chucky: 3 feet of doll dressed for terror. The Hammonds named him after the Chucky of horror-movie fame, and there he is, clutching a bloody (rubber) butcher knife, lurking in the shadows behind the china cabinet. He doesn’t have a cute bone in his body, so exactly how did he get into the house? “I was trying to bid on the angel of death (also not so cute) at a silent auction, a fundraiser for Old Sacramento,” Debbie says. “But I kept signing the wrong sheet, so I ended up with Chucky. He was an accident, but he’s sure been fun.” With some exception. When she noticed children wouldn’t go near the dining room, she started moving Chucky into the bedroom when they were around.

Best haunting begins at home
Weeks before most of us think about tricks or treats, Debbie has the jack-o’-lanterns fired up, her dining table set, orange lights strung and piles of gift bags bulging with Toe Jam Cotton Candy, Witchy Warts, Minty Maggots and Scary Skeletons (a mini make-your-own-edible-Mr. Bones kit). The spindly branches of the Halloween tree are ornamented, and Debbie’s gearing up to bake her signature Halloween cupcakes and meringue ghosts. When it’s all over, is she sad to see the wicked fun die down? Not on your life.

“After Oct. 31,” she says, smiling, “the Halloween comes down and all the Christmas comes out.”