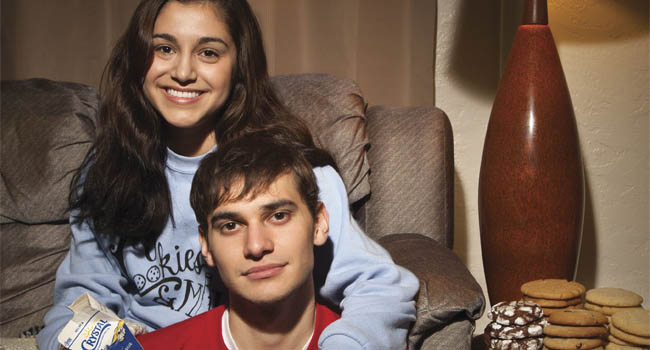 If your idea of the perfect midnight snack is warm-from-the-oven chocolate chip cookies and a cold glass of milk, there’s a new startup in town you might want to put on speed dial. Cookies & Milk, Sacramento’s first late-night cookie delivery service, will bring the classic dessert duo to your doorstep three nights a week (Thursday through Saturday) from 8 p.m. till 2:30 a.m.

I gave Cookies & Milk a call on a recent Friday night, not realizing until it was too late that this could be the start of a very dangerous habit. My dozen cookies—six chocolate chip, six peanut butter—and two small cartons of ice-cold Crystal milk were delivered by the company’s affable and punctual driver. The cookies, tucked into a small cardboard box with checkered tissue paper, had traveled in a thermal bag, the oversized chocolate chips still gooey when they arrived. In a word: heaven.

Cookies & Milk was launched this past February by business and romantic partners Will Countryman, a UC Davis philosophy major, and Amelia Medeiros, a recent UC Davis grad. “We both really liked the idea and had enough money in our bank accounts to get things rolling, so we did it,” says Countryman.

The cookies are baked from scratch at a downtown commercial kitchen. Countryman says the short menu—which also includes chocolate crinkle, sugar and oatmeal raisin cookies—will eventually feature a flavor of the month. A dozen cookies and two milks cost $16; individual cookies are $1.40, with an $8 minimum.

Business has been ticking up, especially as news spreads through word of mouth and social media, says Countryman. “We’ve never had a dull night. Even the first night, we got three or four calls.”