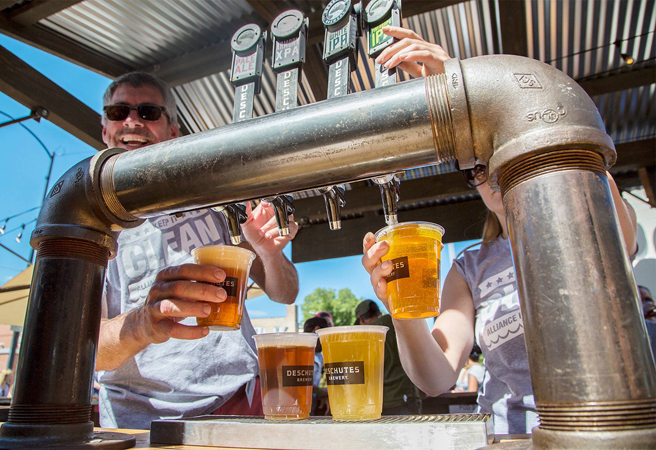 Deschutes Brewery is bringing its 400-foot-long Street Pub back to Sacramento for a third time on Saturday, October 14 from 2-10 p.m. This appearance wraps up its 2017 tour, for which the brewery is proud to have collaborated with title partners that share its culture, sustainability and philanthropic goals: Hydro Flask, Humm Kombucha and KEEN Footwear. During the one-day event, Deschutes Brewery and its partners will once again work to raise money for Runnin’ for Rhett, a nonprofit foundation inspiring people to “Move Into Life” by nurturing a healthy community through fitness and nutrition. The Sacramento community is called to help add to the $180,000 this event has raised for the organization over the last two years. “Through the generous efforts of Deschutes, DBI, and our Runnin’ for Rhett volunteers at the past two years’ events, the $180,000 raised has funded nearly 7,000 additional students through our after school youth fitness program,” said Randy Seevers, executive director of Runnin’ for Rhett and Rhett’s dad. “We’ve expanded into 20 more schools this fall season, and we’re looking to have more students than ever moving into life and running because they can.”

Not only will there be a huge selection of Deschutes Brewery beers flowing from the Street Pub’s multitude of taps, but visitors can find guest taps from local favorites Big Stump Brewing Company and Crispin Cider. Culinary delights are in the works for all the foodies out there from Deschutes Brewery’s corporate executive chef, Jeff Usinowicz, who is teaming up with Chef Wes Nilssen from DeVeres Irish Pub and other local chefs for live “cooking with beer” demos throughout the day. Deschutes will bring an amazing line-up of local bands to the stage including Jelly Bread, IDEATEAM and others to keep everyone moving to the beat. A kids’ zone for families and a bike valet will also be on site, plus unique, interactive offerings from Street Pub partners including: Hydro Flask’s Skee Ball Challenge; Humm Kombucha’s Creation Station for collaborative art projects and activities; and KEEN Footwear’s activism center and lounge, photo booth, games and free shoe raffles. To take your experience to the next level, consider purchasing tickets for The Handle District VIP Lounge. Admission: Free for all ages

Tickets for The Handle District VIP Lounge: Pre-purchase VIP tickets at https://www.deschutesbrewery.com/events/street-pub-sacramento-2/ to get exclusive access to specialty beer tastings led by a Deschutes brewer. The VIP lounge also has catered appetizers to pair with your beer. Tickets include: two beer tokens, a Hydro Flask True Pint, rare barrel tastings, access to the VIP Lounge, a 50 percent off Keen shoe card, plus other fun swag. Thanks to The Handle District for sponsoring this year’s VIP area.

About Deschutes Brewery
Family and employee owned since 1988, Deschutes Brewery – Bend’s original brewpub – has become the cornerstone of Central Oregon’s flourishing craft brew culture. Known for its generous use of whole hops in its defining beers such as Black Butte Porter, Mirror Pond Pale Ale, and Fresh Squeezed IPA, the brewery also keeps fans on the edge of their bar stools with the release of small batch experimental beers each season. Now available in 29 states and Washington D.C., Deschutes’ flagship brewpub has been joined by a main brewing facility overlooking the Deschutes River in Bend, a pub in Portland, and coming in 2021, a new east coast brewery in Roanoke, Virginia. www.deschutesbrewery.com